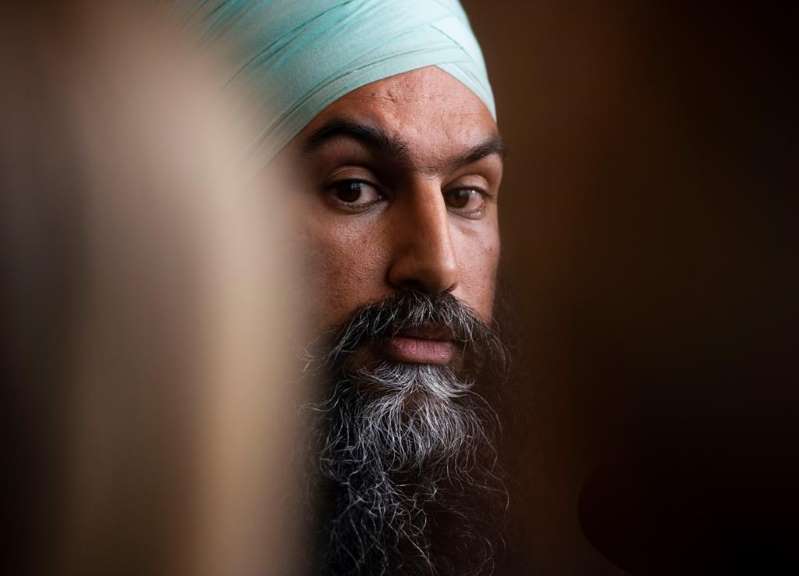 Emerging from a meeting with Prime Minister Justin Trudeau this week, NDP Leader Jagmeet Singh sounded firm on what he wants from this minority parliament.
"I put out three specific priorities that are for the throne speech," said Singh during an interview on The West Block with Mercedes Stephenson.
"Things that I want to see that the prime minister is taking very seriously, and committing to taking some concrete steps [on]."
Singh suggested he feels confident Trudeau took stock of his wish list for the speech, which will take place on Dec. 5, after he announces his new cabinet on Nov. 20.
READ MORE: Singh and Trudeau discuss NDP’s priorities in meeting ahead of throne speech
The Speech from the Throne is the first opportunity for a government to lay out its legislative agenda before the House of Commons, and will be the first chance for the Trudeau Liberals to test whether they can secure enough support from opposition parties to get it passed.
If Trudeau fails to gain a majority of votes in support of the speech, it would trigger the fall of his government and set the stage for another election.
The NDP and the Bloc Quebecois are the two parties that have been the focus of speculation about what it might take for them to prop up the Liberals.
And it's in this parliamentary situation that the NDP have stressed their priorities of universal pharmacare and a national dental care plan.
Singh also says that his party wants stronger climate emissions targets and for the federal government to drop its appeal against a ruling on compensation for Indigenous children.
Trudeau signalled last week that both parties were mostly on the same page.
"With Mr. Singh, we have a number of shared priorities," Trudeau said during a photo op before their meeting.
"Fighting climate change, making sure we're addressing affordability issues ... we both made commitments to pharamcare in our platforms."
The Liberal party platform included a pledge to discuss a potential pharmacare plan with the provinces, but did not commit to implementing it
It also pledged that Canada will have net-zero emissions by 2050.
READ MORE: 9 in 10 Canadians want national pharmacare: Heart & Stroke poll
Singh, however, signalled that he's prepared to vote down the Liberal government's throne speech they don't play ball, but refused to lay out clear lines.
"I am willing to vote against the throne speech," said Singh.
"I don't want to draw any orange lines in the sand, but I do want to show that I'm firm."
Singh noted that the Liberals will likely have to rely on the NDP as a partner to get things done during their minority government.
"If he wants to work with somebody to actually develop something like a dental care program, we're the ones pushing for that," Singh said.
"He'll need to work with us if he wants to deliver it."
READ MORE: Singh lays down ‘challenge’ for Liberal minority but says he’s not drawing ‘lines in the sand’
Trudeau's Liberals came 13 seats short of a majority in the October election.
In effect, that means Trudeau will need to work with other parties to maintain the confidence of the House of Commons in order to survive and pass legislation.
That doesn't necessarily mean that the New Democrats are the only party Trudeau has to work with to deliver on Liberal platform pieces, but they're a party with which the Liberals have found common ground in the past.
Another option could be the Bloc Quebecois.
In an interview with The West Block's Mercedes Stephenson, Bloc Québécois Leader Yves-Francois Blanchet indicated that his party would prop up Trudeau's Liberals for the time being.
"I do not believe that Canadians or Quebecers elected a minority government in order to go back to elections in two years," says Blanchet.
"This comes with the obligation to collaborate — to find common ground."
READ MORE: Bloc Québécois rises to prominence as it triples seats in Parliament
The Bloc Québécois were handed 32 seats by "la belle province," helping them regain official party status in parliament and almost tripling their previous seat count before the writ drop.
New Democrats, on the other hand, had 39 seats before the election but lost one-third of those on Oct. 21, losing 15 and seeing their party almost completely wiped out in Quebec.
With the result of the election, the NDP dropped to fourth in the total number of seats held by a party in parliament.
Singh says that Trudeau working with the separatist Bloc doesn't look like the best way forward for the government.
"The fact that Mr. Trudeau would rely on the support of a party...that seems to be interested in dividing Canada — seems to be not a good way to go ahead," Singh said.
"We're really the option when it comes to working with a national party."
READ MORE: Trudeau won the most seats, but not a majority. What now?
Singh did acknowledge that Trudeau could decide to pass on working with New Democrats, but he says he'll try to look for ways to be constructive.
"He can work with anyone else," Singh said. "But my goal isn't to look for ways to tear down the government."