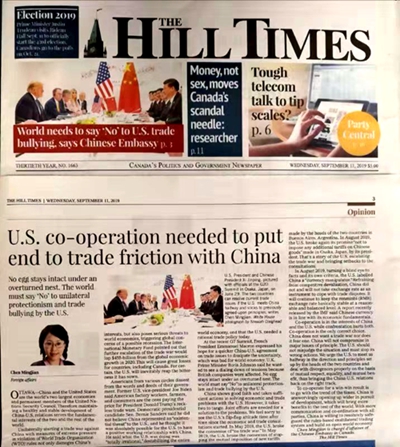 On September 11, The Hill Times published a signed article by Mme.Chen Mingjian, Chargé d'affaires ad interim of the Chinese Embassy in Canada titled “U.S. co-operation needed to put end to trade friction with China”. Here is the full text:
China and the United States are the world’s two largest economies and permanent members of the United Nations Security Council. Therefore maintaining a healthy and stable development of China-U.S. relations serves the fundamental interests of the two and the rest of the world.
Unilaterally starting a trade war against China with measures of extreme pressure in violation of World Trade Organization (WTO) rules not only damages China’s interests, but also poses serious threats to world economies, triggering global concerns of a possible recession. The International Monetary Fund pointed out that further escalation of the trade war would lop $455-billion from the global economic growth in 2020. This will cause great losses for countries, including Canada. For certain, the U.S. will inevitably reap the bitterness it has sown.
Americans from various circles dissent from the words and deeds of their government. Former U.S. vice-president Joe Biden said American factory workers, farmers, and consumers are the ones paying the price for President Donald Trump’s reckless trade wars. Democratic presidential candidate Sen. Bernie Sanders said he did not believe China represented an “existential threat” to the U.S., and he thought it was absolutely possible for the U.S. to have a positive working relationship with China. He said what the U.S. was doing was “totally irrational,” destabilizing the entire world economy, and that the U.S. needed a rational trade policy today.
At the recent G7 Summit, French President Emmanuel Macron expressed his hope for a quicker China-U.S. agreement on trade issues to dissipate the uncertainty, which was bad for world economy. U.K. Prime Minister Boris Johnson said he wanted to see a dialing down of tensions because British companies were affected. No egg stays intact under an overturned nest. The world must say “No” to unilateral protectionism and trade bullying by the U.S.
China shows good faith and takes sufficient actions in solving economic and trade problems with the U.S. However, it takes two to tango. Joint efforts are needed for a solution to the problems. We feel sorry to see the U.S.’s flip-flop attitude time after time since the economic and trade consultations started. In May 2018, the U.S. broke the consensus of “no trade war.” In May 2019, the U.S. broke the consensus of stopping the mutual imposition of new tariffs made by the heads of the two countries in Buenos Aires, Argentina. In August 2019, the U.S. broke again its promise “not to impose any additional tariffs on Chinese goods” made in Osaka, Japan, by its president. That’s a story of the U.S. escalating the trade war and bringing setbacks to the consultations.
In August 2019, turning a blind eye to facts and its own criteria, the U.S. labelled China a “currency manipulator.” Refraining from competitive devaluation, China did not and will not take exchange rate as an instrument to cope with trade disputes. It will continue to keep the renminbi (RMB) exchange rate basically stable at a reasonable and balanced level. A report recently released by the IMF said Chinese currency is in line with its economic fundamentals.
Co-operation is in the interests of China and the U.S. while confrontation hurts both. Co-operation is the only correct choice. China does not want a trade war nor does it fear one. China will not compromise in major issues of principle. The U.S. should not misjudge the situation and must stop its wrong actions. We urge the U.S. to meet us halfway in the direction and principles set up by the heads of the two countries and deal with divergences properly on the basis of mutual respect, equality, and mutual benefit, thus bringing the China-U.S. relations back on the right track.
To co-operate for a win-win result is to go with the trend of the times. China is unswervingly opening up wider in pursuit of development, which will bring more benefits to the rest of the world. With more communication and co-ordination with all parties, China is willing to resolutely safeguard the rules-based multilateral trading system and build an open world economy.