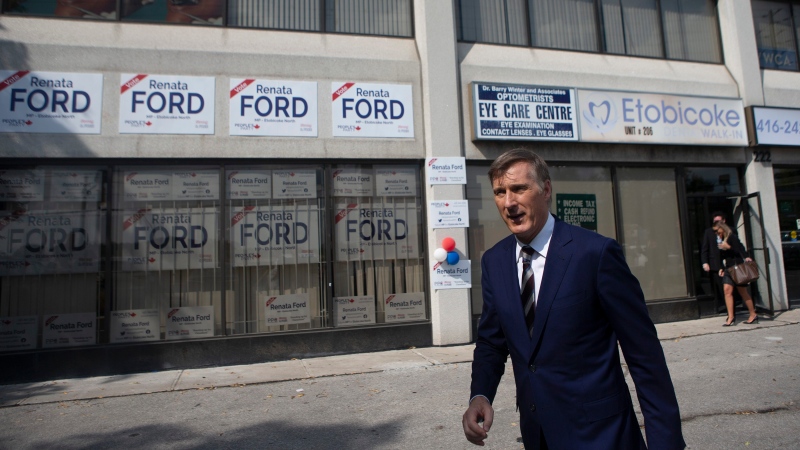 OTTAWA – Maxime Bernier, the leader of the People's Party of Canada, has accepted an invitation to participate in the two federal election debates organized by the Leaders' Debates Commission.
CTV News confirmed Monday afternoon that Bernier has accepted the invitation. In a video posted on social media, Bernier said he was pleased, calling it "the right decision," because now Canadians can look "at all the options."

Charleswood-St.-James-Assiniboia-Headingley, Man. where past Conservative MP Steven Fletcher is the PPC candidate
Pickering-Uxbridge, Ont. where past Conservative MP Corneliu Chisu is the PPC candidate.
As of Monday, the People's Party of Canada has nominated 321 candidates for the 2019 election.
Watch Bernier's interview with Evan Solomon on CTV's Question Period
The Commissioner also considered party membership, fundraising, organizational capacity, riding level polls and other insight into support in certain ridings, as well as media presence on national issues.
"With the benefit of more recent information, I am of the view that the PPC has attracted a significant number of party members, has established a notable presence in the media and on the political landscape and, based on recent polling data, has achieved a reasonable chance of success in more than one riding," said Johnston.
This is the first ever federal election in which the People's Party is running. Bernier has billed his party as a "smart populist party" and is promising "no political correctness," in this campaign.
Leader profile: Maxime Bernier
Bernier made big political waves in August of last year when he left the Conservative Party that he nearly led and in which he was a past cabinet minister, to form a new party. He has since been accused of providing an attractive political option for those with anti-immigrant and extremist far-right values.
In response to Bernier being invited, a Conservative Party spokesperson accused Trudeau of "stacking the deck" in his favour, saying the debate panel was "hand-picked" by Trudeau, which was not the case.
The Liberals established the Commission after the last election, but Trudeau named former governor general Johnston to lead the Commission and select the other members on the Commission's advisory board.
"Mr. Scheer is looking forward to finally having the opportunity to debate Justin Trudeau," said the Conservatives, in reference to Trudeau not attending the first English-language debate held last week.
In a statement of their own, the Liberal Party said that Johnston was appointed "so decisions on participation for the two official debates would be made independently," and that Trudeau looks forward to the debates.
Singh told reporters on Monday that he thinks "it’s wrong to give Mr. Bernier the platform to spread his hateful and divisive message.”
He also tweeted that he will "strongly oppose any hatred expressed on that stage" during the debate.
The two Commission debates are being produced by the Canadian Debate Production Partnership (CDPP).
The CDPP group is made up of: CTV News, CBC News, Radio-Canada, Global News, Toronto Star and the Torstar chain, La Presse, Le Devoir, L’Actualité, HuffPost Canada and HuffPost Québec. The group has also expanded its membership to include distribution to OMNI Television, APTN, Groupe Capitales Medias, GroupV Media and Yahoo Canada.
These two debates will be streamed free online and will be translated into several languages, including some Indigenous languages. They will also feature sign language interpretation, closed captioning and described video services.
The English debate will be held on Oct. 7 and the French debate is on Oct. 10. Both will take place at the Canadian Museum of History in Gatineau, Que.