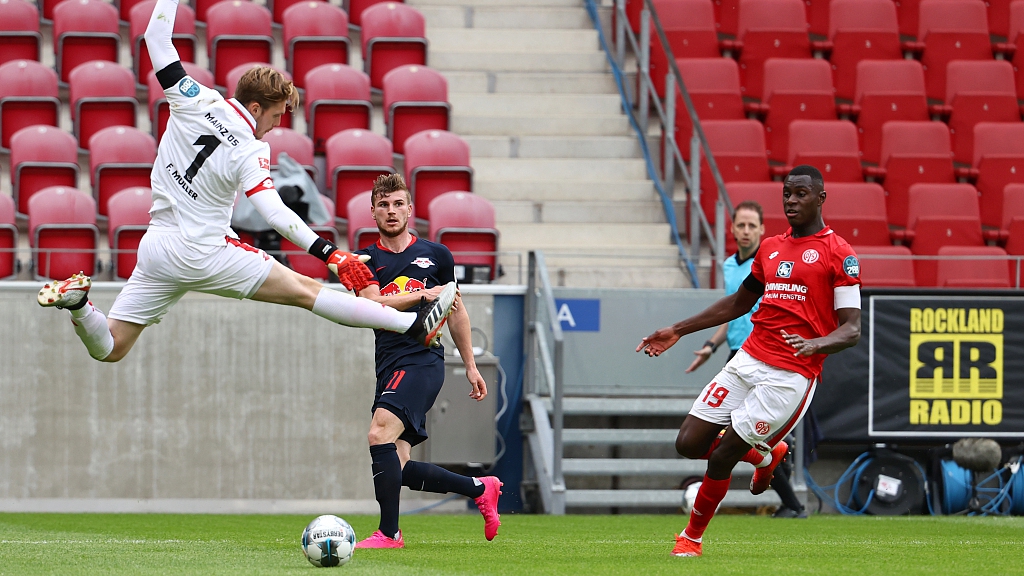 RB Leipzig's Timo Werner (C) in action during their Bundesliga clash with Mainz 05 at Opel Arena, Germany, May 24, 2020. /VCG

Timo Werner scored a hat-trick as RB Leipzig demolished hosts Mainz 5-0 on Sunday to reclaim third place in the Bundesliga after their disappointing draw with Freiburg last week.

The Germany international Werner, a target for several clubs including Liverpool this summer, opened his account in the 11th minute before Yussuf Poulsen nodded in the second 12 minutes later. Marcel Sabitzer killed off the contest before the break, sidefooting into the top corner after another rapid break as Mainz collapsed.

Werner scored again three minutes after the restart and he chipped the ball over the goalkeeper Florian Müller with 15 minutes left for his 24th goal of the season and 91st in all competitions for Leipzig to become their all-time top scorer.

Leipzig moved back into third place on 54 points, one place ahead of Bayer Leverkusen and two clear of Borussia Mönchengladbach. Bayern Munich lead the standings with 61 points, four ahead of Borussia Dortmund whom they face on Tuesday.

Mainz remain three points clear of the relegation play-off place, that cushion coming courtesy of a remarkable Cologne fightback in a 2-2 draw with Fortuna Düsseldorf which prevented the visitors from cutting the gap to a single point. 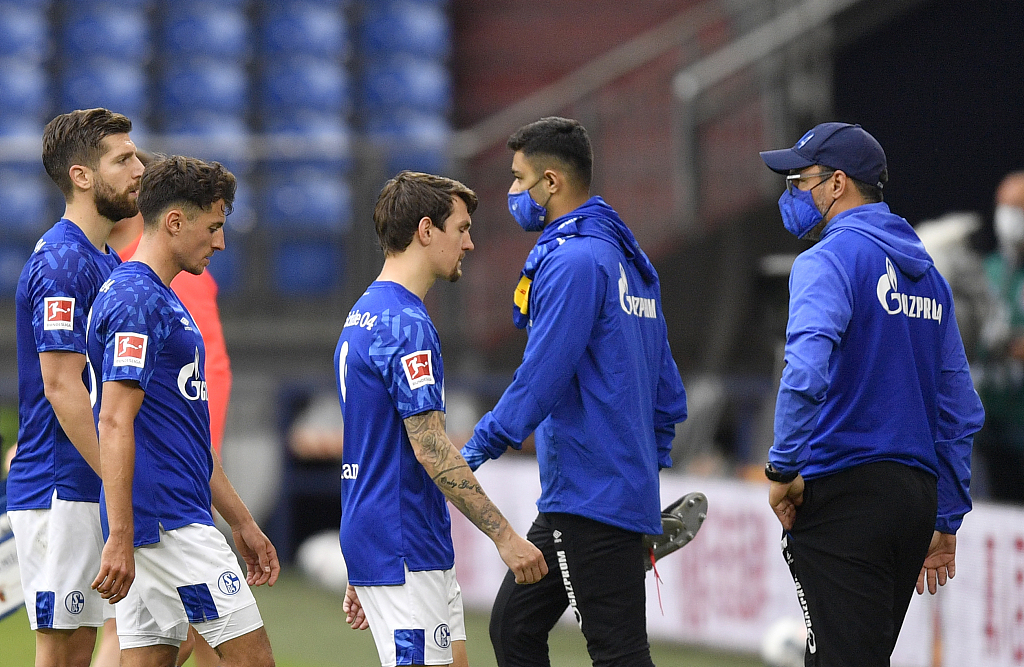 Schalke 04 players leave the pitch in frustration following their defeat at Augsburg at Veltins-Arena, Gelsenkirchen, Germany, May 24, 2020. /VCG

Düsseldorf looked to be cruising at 2-0 until Anthony Modeste struck in the 88th minute and Jhon Córdoba levelled in the first minute of stoppage time. Kenan Karaman had put Düsseldorf ahead four minutes before the break with a shot that deflected off the on-loan QPR defender Toni Leistner.

There was a let-off for the visitors just before the hour as Mark Uth struck a post twice and was then fouled as he tried for a second rebound, only to see the following penalty saved. Düsseldorf took full advantage as Erik Thommy put away their second two minutes later, only for them to be pegged back by the hosts' late double strike.

Earlier, Schalke slumped to a shock 3-0 home defeat against relegation‑threatened Augsburg, their fourth loss in five games, dropping them to eighth place in the Bundesliga.

Augsburg's Eduard Löwen curled in a sensational free-kick in the sixth minute and the Nigerian winger Noah Sarenren Bazee slotted home in the 76th before Sergio Cordova added the third in stoppage time.

Schalke, now without a win in nine league games, slipped down to eighth place on 37 points while Augsburg's first victory after four successive defeats lifted them to 12th on 30 points, seven above the relegation play-off spot.