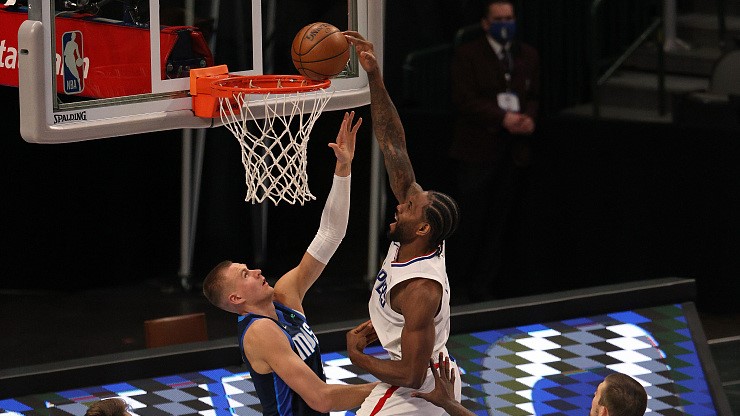 Kawhi Leonard (R) of the Los Angeles Clippers dunks in the game against the Dallas Mavericks at American Airlines Center in Dallas, Texas, U.S., March 15, 2021. /CFP

The Los Angeles Clippers defeated the Dallas Mavericks 109-99 at American Airlines Center on Monday, achieving their second win in the recent six games.

One surprising fact about the Clippers this season is that they are the worst team in clutch time – last five minutes of the game with a score difference smaller than five points. Of course, the Mavericks are not much better in this area.

One of the Clippers' problems is Paul George. Though he made a key shot in the end to kill this game, he could and should have done better than missing 13 of 18 field goal attempts. The other franchise player of the team Kawhi Leonard did not produce pretty efficiency (9-20 in FGs), but he scored nine points in the last quarter and four valuable steals defensively. 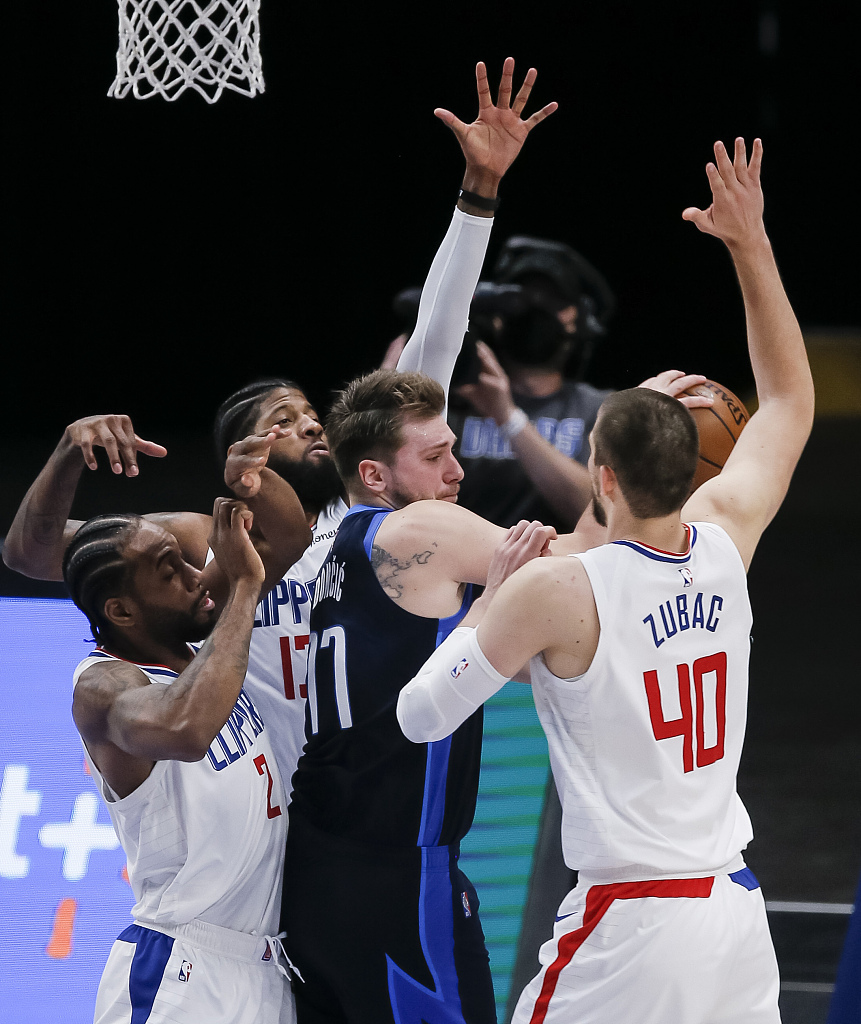 None of the rest of the team reached 10 in scoring. When their opponents found they could invest most of their defensive attention in Doncic and Porzingis without having to worry about other Mavericks standing out – it's no wonder the team are still wandering on the edge of playoff qualification zone.

Other games on Monday (away teams come first): 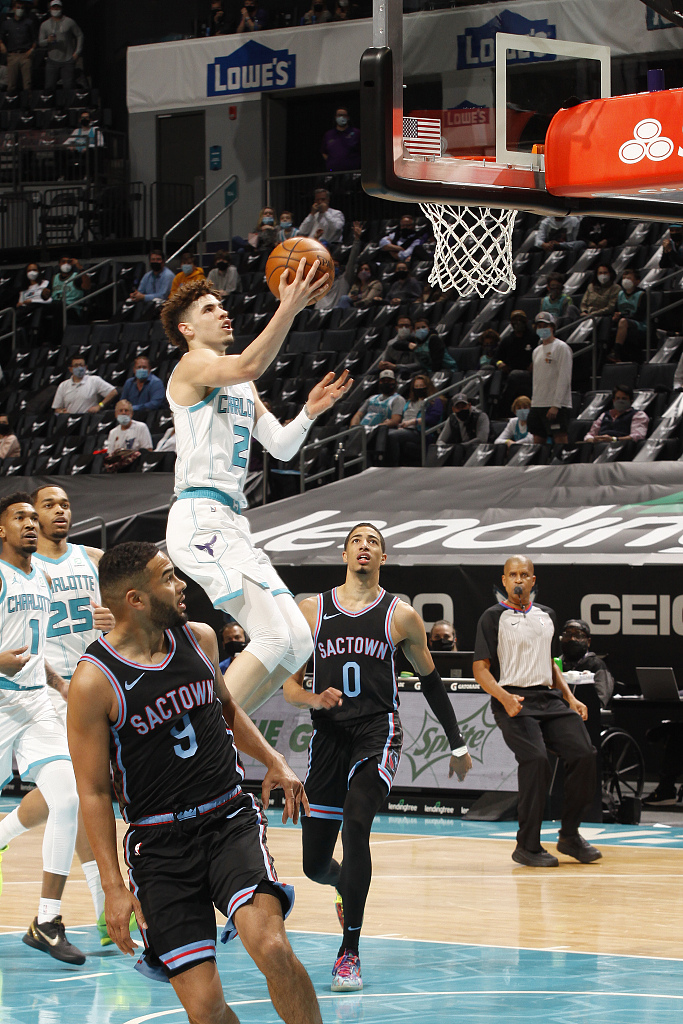 LaMelo Ball #2 of the Charlotte Hornets drives toward the rim in the game against the Sacramento Kings at Spectrum Center in Charlotte, North Carolina, U.S., March 15, 2021. /CFP

LaMelo Ball of the Hornets and Tyrese Haliburton of the Kings have been considered two major candidates for this season's Rookie of the Year Award. The game at Spectrum Center on Monday became a good opportunity for their individual competition.

In the end, Ball won this round by scoring 16 points, four rebounds and four assists. He went 4-6 in the last quarter, contributing eight valuable points to the Hornets' comeback victory. The team now ranks No. 6 in the Eastern Conference with a 20-18 record, the same with the Boston Celtics. 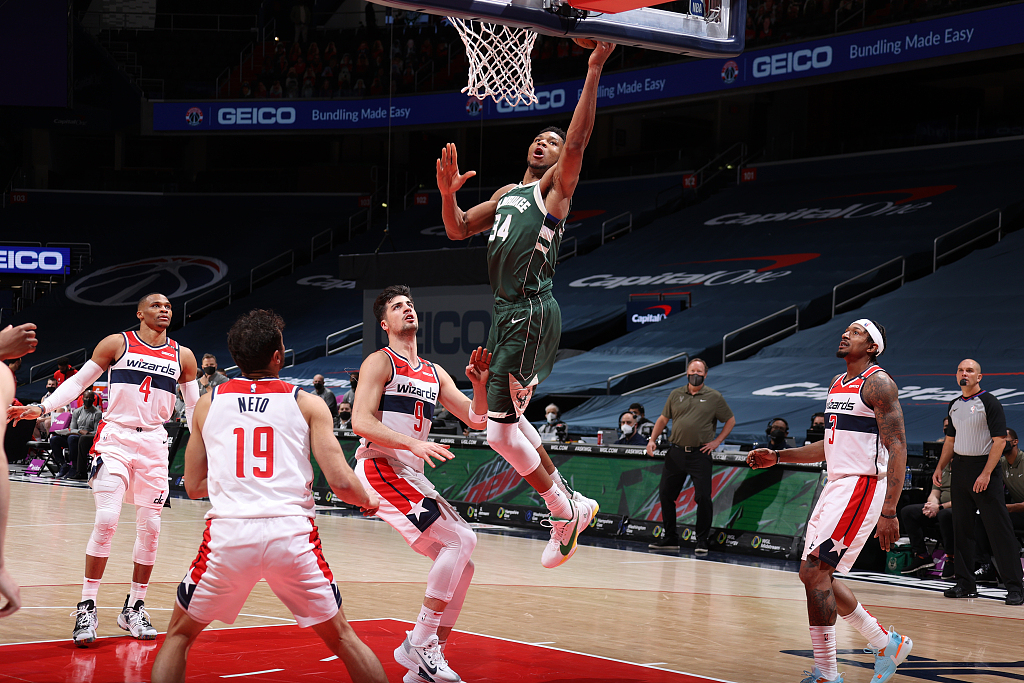 Giannis Antetokounmpo #34 of the Mileaukee Bucks drives toward the rim in the game against the Washington Wizards at Capital One Arena in Washington, D.C., U.S., March 15, 2021. /CFP

However, the Wizards' poor defense failed stop seven of the Bucks from reaching double-digit points, led by Giannis Antetokounmpo's triple-double of 31 points, 15 rebounds, 10 assists and three steals. This was the Bucks' fourth straight win and fourth consecutive loss of the Wizards. 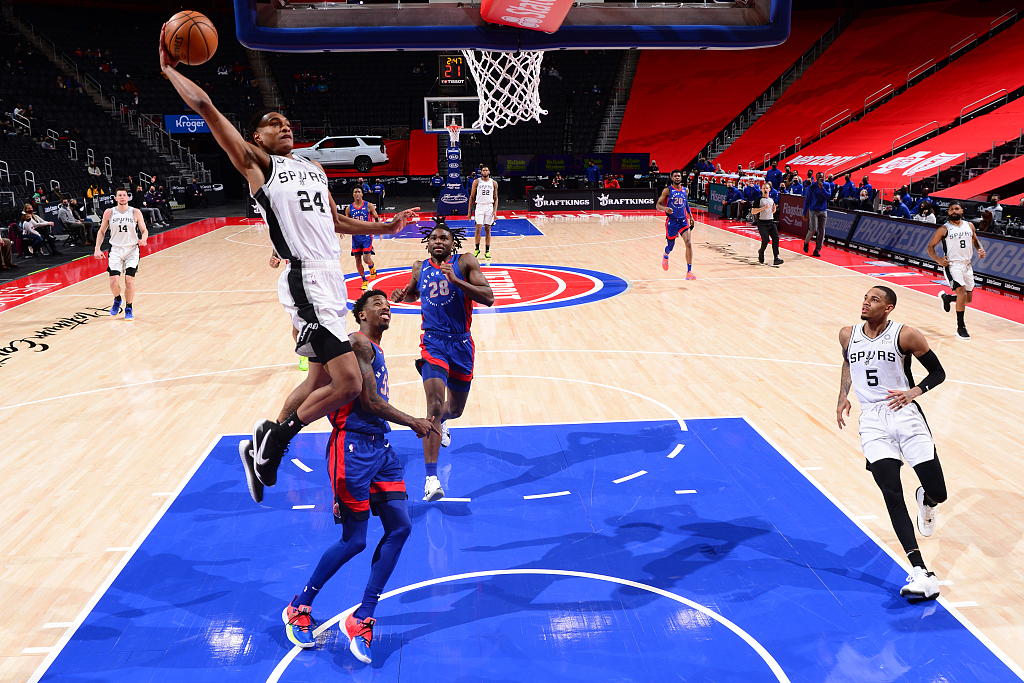 Devin Vassell #24 of the San Antonio Spurs dunks in the game against the Detroit Pistons at Little Caesars Arena in Detroit, Michigan, U.S., March 15, 2021. /CFP

Though the Spurs did not have LaMarcus Aldridge or DeMar DeRozan, their opponents, the Pistons, are one of the few teams that had even a more disappointing lineup than the Spurs. 10 of the 12 players the Spurs sent to the floor pocketed points and six of them were above 10. This road win ensured that the team still remain in the playoff qualification zone.

The Pistons last week announced that all of their players are open for trade discussion, a sign of complete rebuilding. Considering that the small market in Detroit and the team's not no impressive draft record in recent years, the Pistons may have years to wait before rejuvenation. 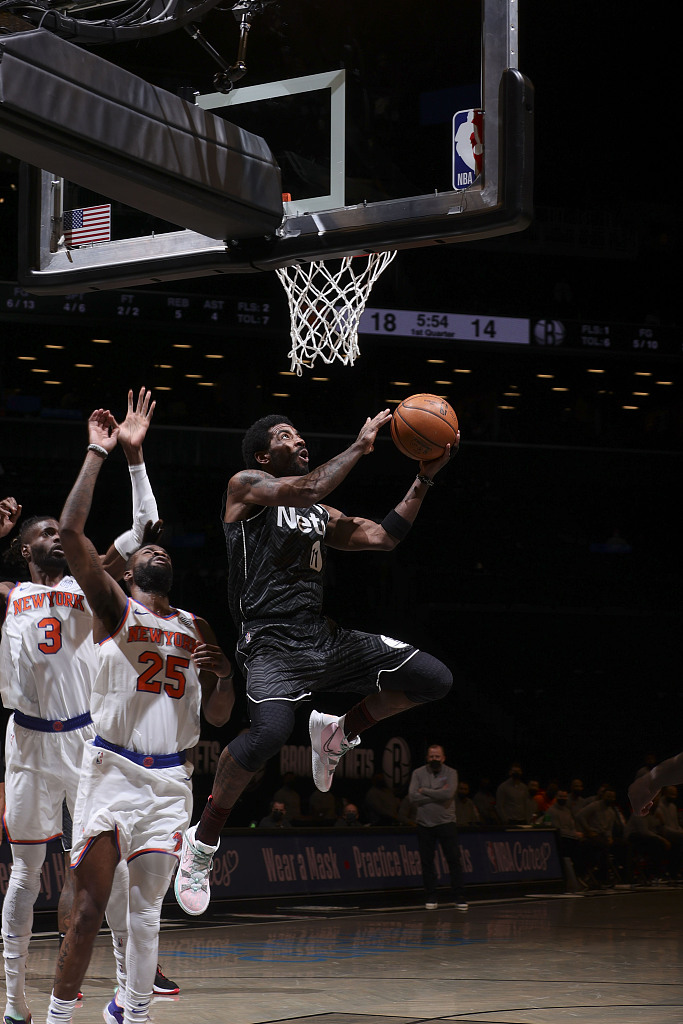 Kyrie Irving #11 of the Brooklyn Nets drives toward the rim in the game against the New York Knicks at Barclays Center in Brooklyn, New York, U.S., March 15, 2021. /CFP

The Nets claimed the fifth win in a row beating the Knicks at home. James Harden missed all five attempts from downtown but he maintained the incredible orchestrating performance by scoring his 10th triple-double of 21 points, 15 rebounds and 15 assists. More importantly, the Nets can rely on Kyrie Irving in scoring as he went 13-18 in field goals to get 34 points.

Despite the loss at Barclays Center on Monday, the Knicks should be happy to watch their young men's performance against strong opponents like the Nets. Julius Randle had 33 points, 12 rebounds and six assists. R.J. Barrett and Immanuel Quickley contributed 23 and 21 points respectively.

Even then, they were unhappy that Randle had to be held back by his teammates from going over to referee Scott Foster over a controversial call at the end of the game. 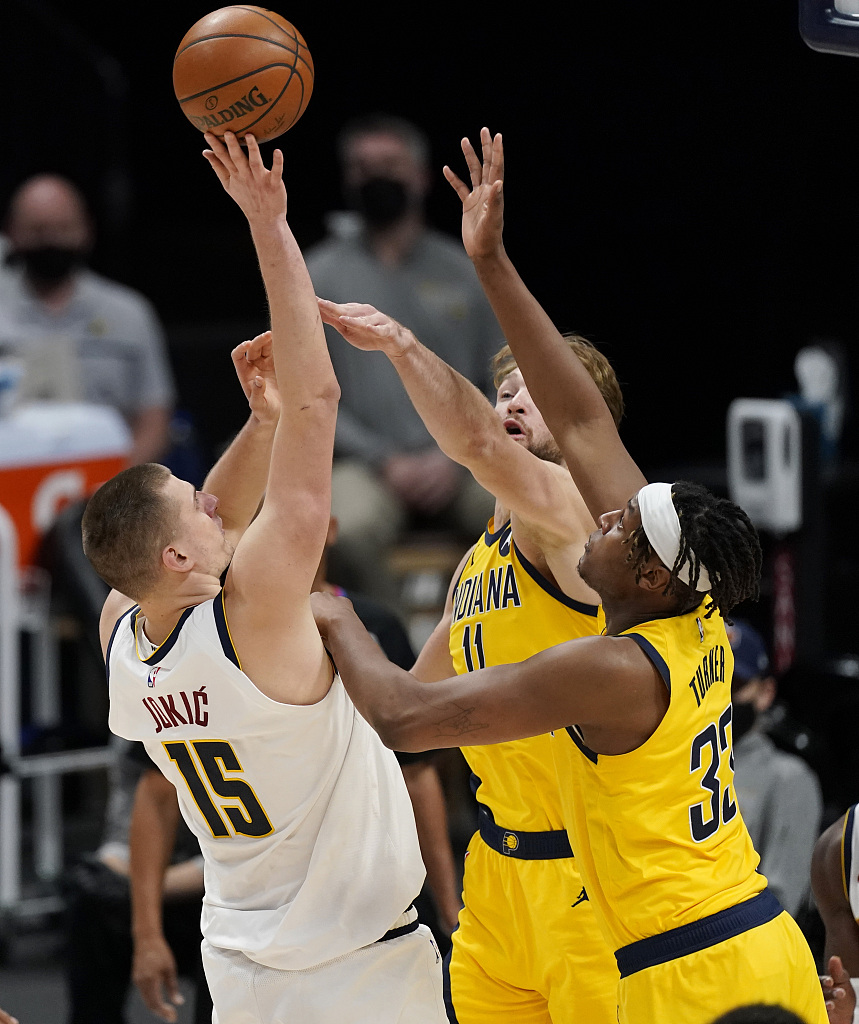 Nikola Jokic #15 of the Denver Nuggets shoots in the game against the Indiana Pacers at Ball Arena in Denver, Colorado, U.S., March 15, 2021. /CFP

Nikola Jokic put down 32 points, 14 rebounds and five assists at Ball Arena on Monday, leading the Nuggets to a big win over the Pacers at home. Jamal Murray was not very productive getting 16 points, but he found his efficiency back shooting 3-5 from the arc, not to mention that Murray also delivered eight assists. Will Barton and Michael Porter Jr. both contributed 20 points as well.

On the Pacers' side, Malcolm Brogdon had team-high 24 points. Caris LeVert scored 17 points in his second game since returning from injury. Domantas Sabonis missed on rebound for a triple-double (10 points, nine rebounds and 10 assists) but getting only 10 points does not match an All-Star big man. Nor is it good enough to help the Pacers win. 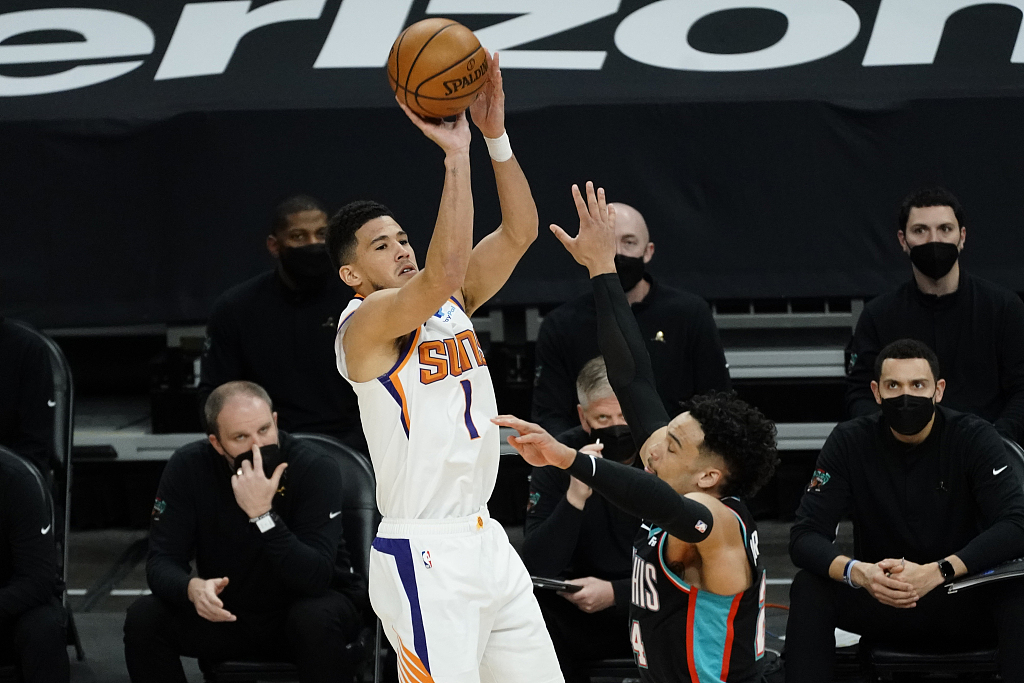 Devin Booker #1 of the Phoenix Suns shoots in the game against the Memphis Grizzlies at Phoenix Suns Arena in Phoenix, Arizona, U.S., March 15, 2021. /CFP

How easy was this home win for the Suns? Devin Booker was the only one reaching 30 minutes on the floor. He also scored a game-high 27 points for the Suns. Chris Paul missed only two of his 11 field goal shots to get 18 points while delivering seven assists. Deandre Ayton had 15 points, nine rebounds and three blocks, but he failed to stop Jonas Valanciunas drop 24 points and 17 rebounds by going 11-14 in field goals.

This was the 20th win of the Suns in the past 22 games, which is why the team are No. 2 in the Western Conference, above both the Los Angeles Lakers and the Clippers. Perhaps it's time for more attention to be paid to the top teams, the Suns and the Utah Jazz. 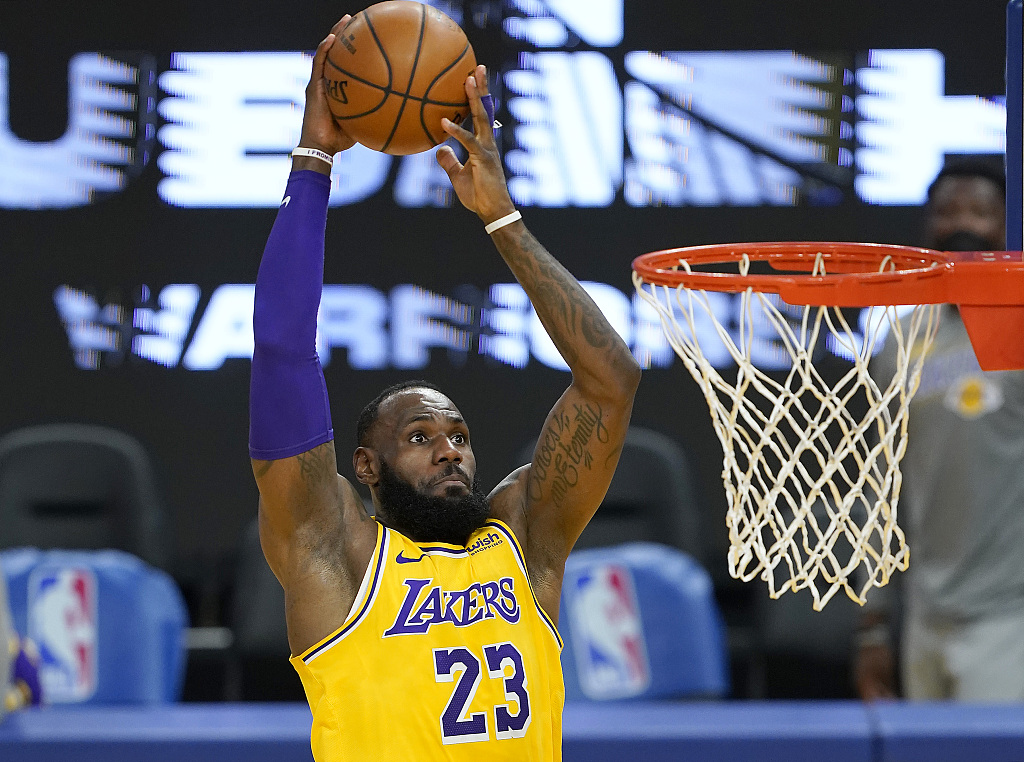 LeBron James of the Los Angeles Lakers dunks in the game against he Golden State Warriors at Chase Center in San Francisco, California, U.S., March 15, 2021. /CFP

LeBron James put down 22 points, 10 rebounds and 11 assists at Chase Center on Monday, pocketing the 98th triple-double in his career and the 10th one after turning 35. In fact, he's the first one in NBA history to get 10 triple-doubles at that age.

The purple and gold's backup lineup shined as well as their ace. Led by Montrezl Harrell, Horton Tucker and Kyle Kuzma, they contributed 74 points to the team's big win. Scoring 27 points is season high for Harrell, but the bigger surprise was that Tucker delivered 10 assists. 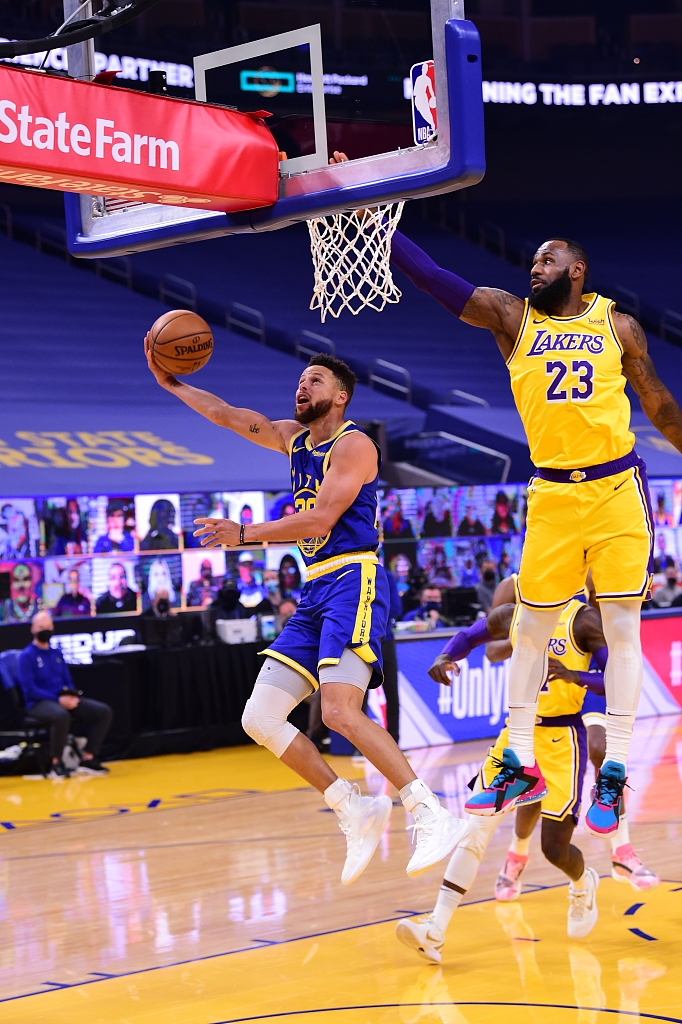 Stephen Curry (L) of the Golden State Warriors shoots in the game against the Los Angeles Lakers at Chase Center, March 15, 2021. /CFP

No one would blame the Warriors much for losing to the Lakers in a back-to-back game, unless they did it in such a painful way. The No. 2 overall big man James Wiseman was bullied by Harrell in the game, a price coach Steve Kerr was willing to let him pay for the future good of both himself and the team.

Despite the loss, Stephen Curry refreshed another three records. He (17,531 points) surpassed Jayson Kidd to rank No. 85 in the NBA All-Time Points Leaders list. Curry delivered two assists to overstep Gay Rogers, becoming franchise all-time leader in this area. Moreover, this was the 100th straight game in which Curry drained at least one triple, the third-longest in league history. The No. 1 and No. 2 record belong to him (157) and Kyle Korver (127) respectively.