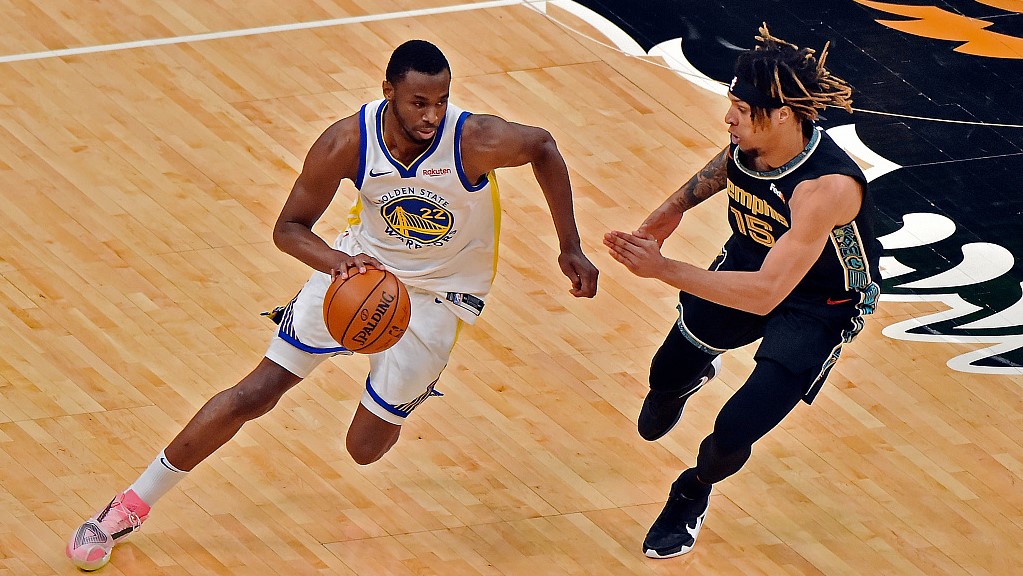 Andrew Wiggins, #22 of the Golden State Warriors, tries to penetrate in the game against the Memphis Grizzlies at FedExForum in Memphis, Tennessee, U.S., March 19, 2021. /CFP

The Golden State Warriors pocketed their second consecutive win after defeating the Memphis Grizzlies 116-103 at FedExForum on Friday.

Stephen Curry sat on this road game after suffering a tailbone contusion on Wednesday. His absence left the Warriors with Andrew Wiggins as their only guy who's able to launch offense off the dribble. That concerned both fans and the team because Wiggins' problem was never with his body but his will. 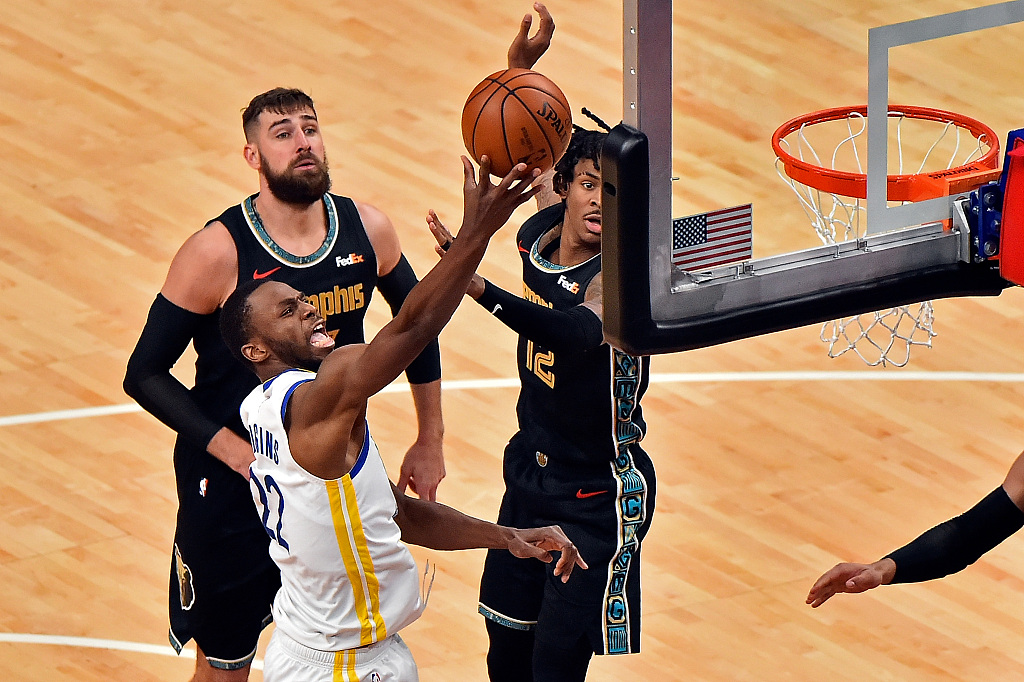 Andrew Wiggins #22 of the Golden State Warriors shoots in the game against the Memphis Grizzlies at FedExForum, March 19, 2021. /CFP

At least he showed a decent will against the Grizzlies. The 26-year-old swingman was 14-24 in field goals, 6-11 in 3-pointer, and even earned nine free throws (six made) to score career-high 40 points. He did everything the Warriors wanted to see.

Of course, Wiggins was not the only surprise for the team on Friday. Jordan Poole and Damion Lee both contributed 20+points and seven triples together. Draymond Green, though he missed all six attempts, he scored 11 rebounds and 13 assists. 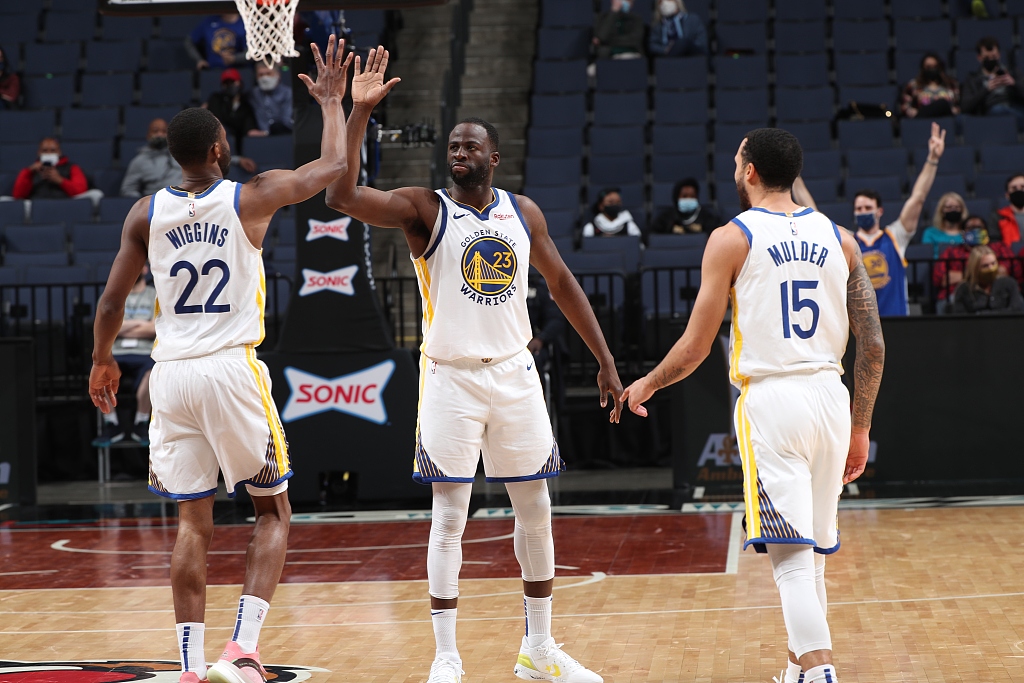 Andrew Wiggins #22 and Draymond Green #23 of the Golden State Warriors hi-five each other in the game against the Memphis Grizzlies at FedExForum, March 19, 2021. /CFP

There's no confirmation when Curry will come back, and before that happens, the Warriors need the above guys to do what they did today, if not better, to stay hopeful, at least for playoff qualification.

Other games on Friday (away teams come first): 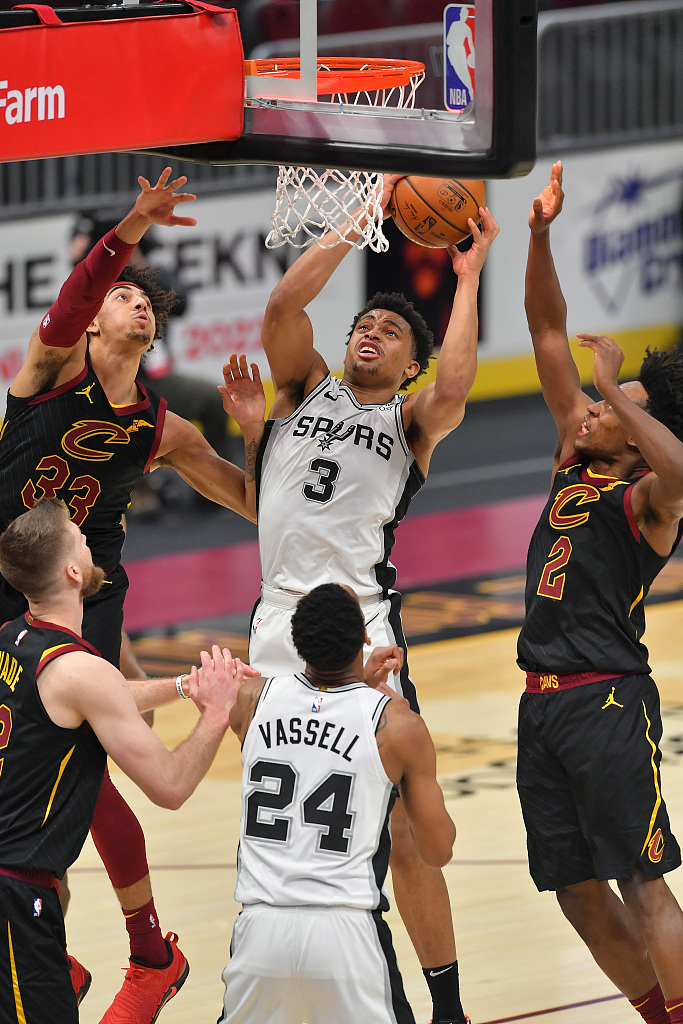 Keldon Johnson #3 of the San Antonio Spurs drives toward the rim in the game against the Cleveland Cavaliers at Rocket Mortgage Fieldhouse in Cleveland, Ohio, U.S., March 19, 2021. /CFP

DeMar DeRozan returned for the Spurs and he went 7-12 in field goals to score 20 points plus seven assists. Defeating the Cavaliers on the road was another win of teamwork for the Spurs as six of their players reached double-digit points in the game. However, there's still one who deserved more credit than others, Keldon Johnson. The second-year swingman dropped 23 points and 21 rebounds, including 11 on the offensive glass.

On the Cavaliers' side, both Collin Sexton and Darius Garland had 29 points on the floor. Jarrett Allen got a double-double of 15 points and 11 rebounds in addition to two blocks. The three should be part of the team's future plan, and the question is: Can the Cavaliers find better teammates for them? 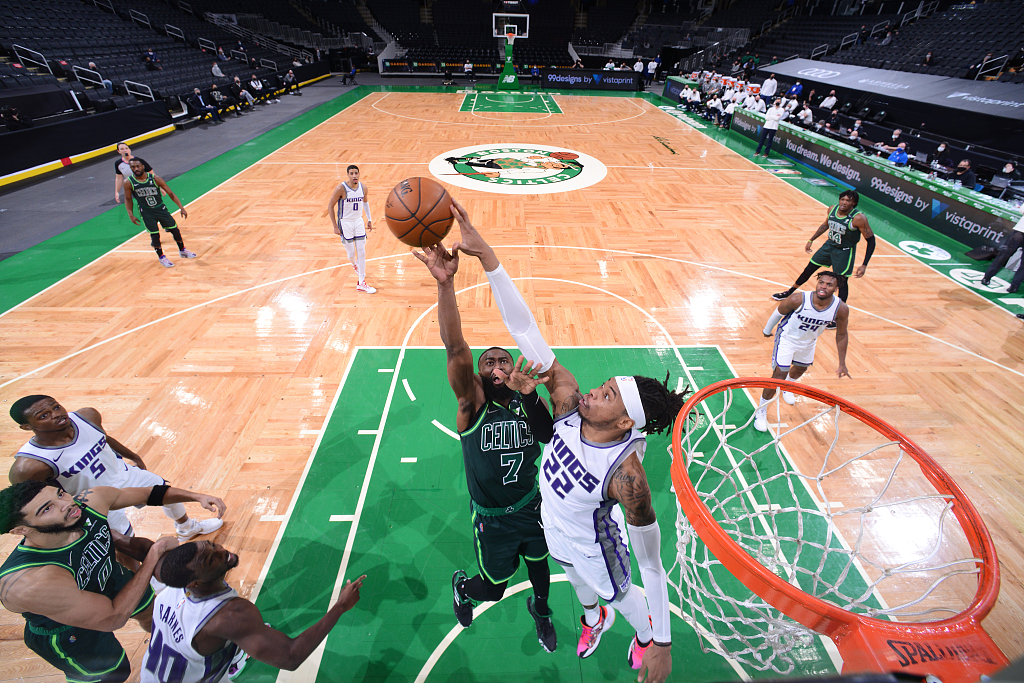 Richaun Holmes #22 of the Sacramento Kings blocks a shot by Jaylen Brown #7 of the Boston Celtics at TD Garden in Boston, Massachusetts, U.S., March 19, 2021. /CFP

The Celtics suffered the fourth loss of the past five games at TD Garden on Friday. What should concern them more than their struggling form was that two of the losses were against teams like the Cavaliers and the Kings, both of which were after lottery draft picks instead of playoff qualifications. 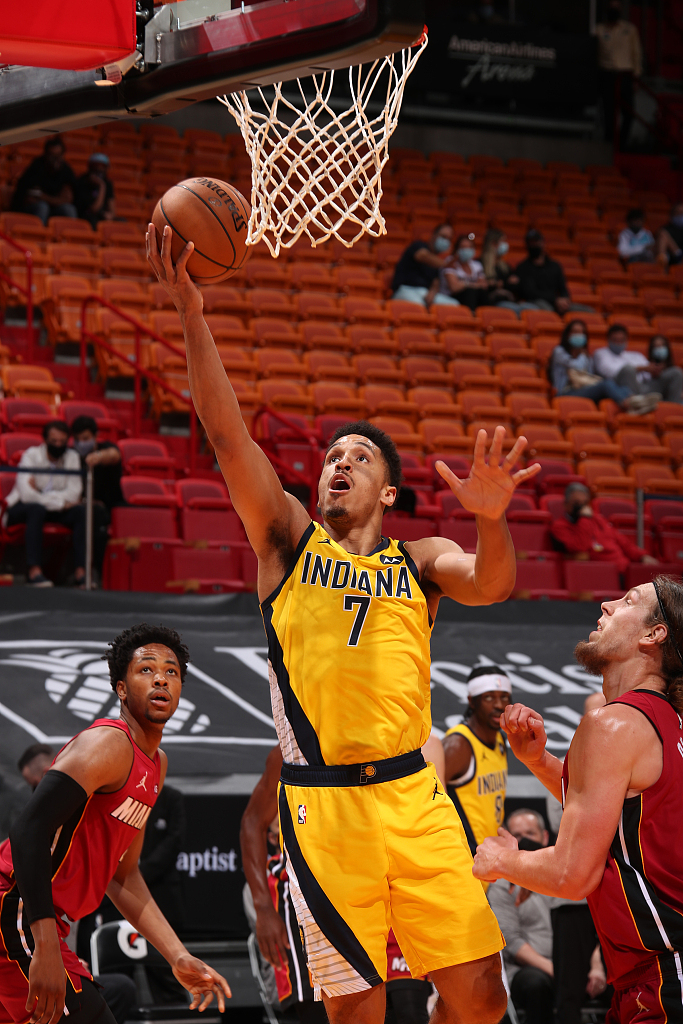 Malcolm Brogdon #7 of the Indiana Pacers shoots in the game against the Miami Heat at American Airlines Arena in Miami, Florida, U.S., March 19, 2021. /CFP

The Pacers' victory at American Airlines Arena on Friday came from their surprising 3-point shooting performance. The whole team went 20-36 from downtown. Malcolm Brogdon and Justin Holiday together drained 12 triples. The other major contributor to their victory was T.J. McConnell and his double-double of 16 points, 15 assists.

There's no reason for the Heat to expect every opponent to shoot like Friday's Pacers in the future, but the team should keep an eye on their own 3-pointers. Going 9-34 from the arc is absolutely not acceptable. 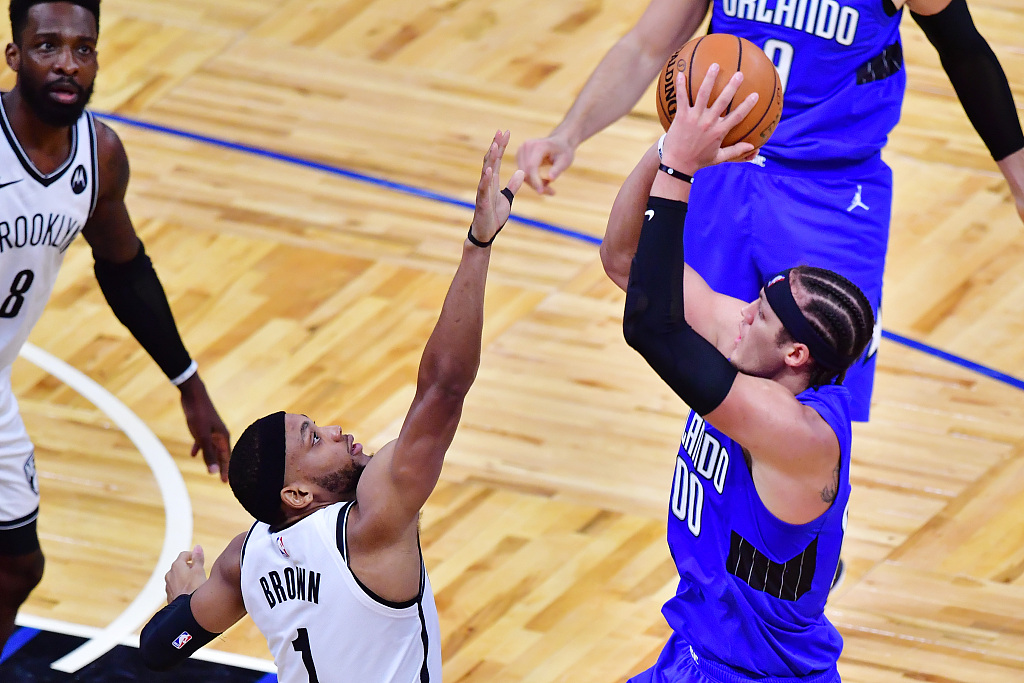 Aaron Gordon #00 of the Orlando Magic shoots in the game against the Brooklyn Nets at Amway Center in Orlando, Florida, U.S., March 19, 2021. /CFP

The Nets joined the Celtics and the Heat to be upset by underdog opponents. Kyrie Irving was efficient enough to go 19-31 to put down game-high 43 points, but he must feel very lonely on the floor because James Harden and Joe Harris only got 19 and 16 points. Moreover, the whole team making only 10 triples was not good enough to win.

Aaron Gordon put down team-high 38 points for the Magic after going impressively 14-20 in field goals and even more impressively 7-8 in triples. Evan Fournier drained six shots from the 3-point line to get 31 points. Nikola Vucevic, though he was not in his best shooting form, he missed only two assists for a triple-double (22 points, 14 rebounds, and eight assists). 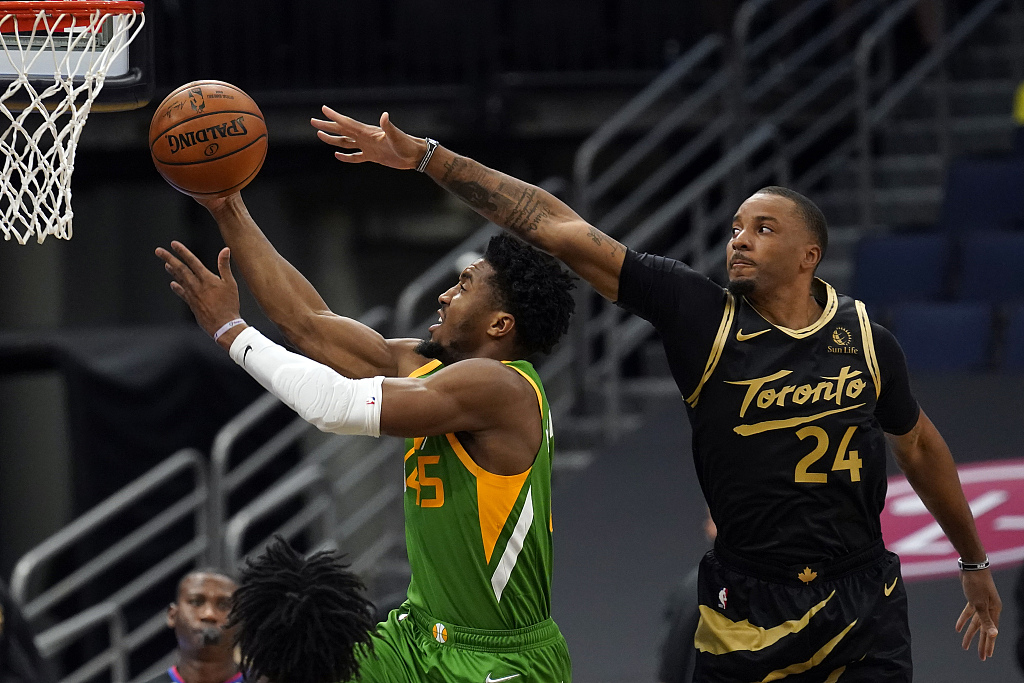 Donovan Mitchell #45 of the Utah Jazz shoots in the game against the Toronto Raptors at Amalie Arena in Tampa, Florida, U.S., March 19, 2021. /CFP

The Jazz avoided a second straight loss by edging over the Raptors at Amalie Arena. Donovan Mitchell missed all his nine triple attempts, earned 16 free throws, and made 15 of them. More importantly, he claimed six valuable eight points in the last 85 seconds, making sure that his team left Florida with a win.

This was the ninth loss of the Raptors in the past 10 games. They are now ranking only No. 11 in the Eastern Conference with a 17-24 record. The season already entered the second half, and perhaps it's time for the Raptors to decide over their target for 2021. Rebuilding is one of the options. 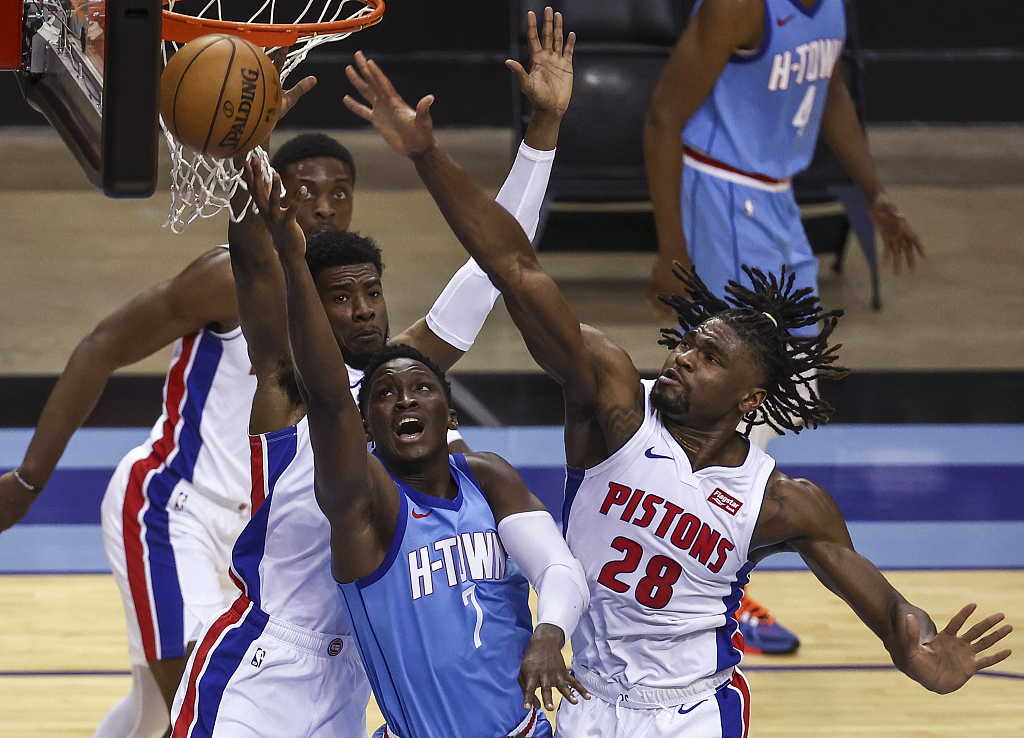 Victor Oladipo #7 of the Houston Rockets shoots in the game against the Detroit Pistons at Toyota Center in Houston, Texas, U.S., March 19, 2021. /CFP

The Rockets continued to refresh their longest losing streak after they were walked over by the Pistons at Toyota Center. The team's best three players John Wall, Victor Oladipo, and Christian Wood, all played, but they did not stop the embarrassment from happening. The team's longest winning streak is 22, and they are three losses away from making it symmetric. 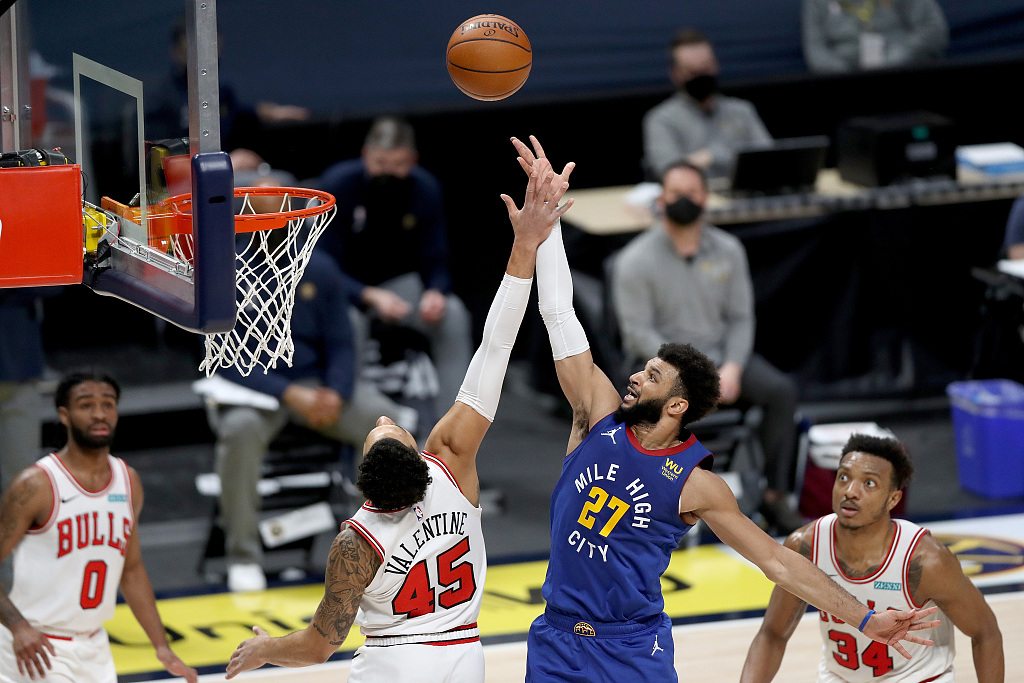 Jamal Murray #27 of the Denver Nuggets shoots in the game against the Chicago Bulls at Ball Arena in Denver, Colorado, U.S., March 19, 2021. /CFP

Jamal Murray has not been much of himself since the All-Star break, as he averaged only 12 points in four games. Fortunately, the 24-year-old found his firepower back at Ball Arena on Friday. He first buried the game-tying triple in the last moment of the fourth quarter to drag the game into overtime. Then Murray claimed seven points in OT, including making a jumper when there were 10 seconds left to expand the Nuggets' lead to four. His 34 points were equally important as the 34 points, 15 rebounds, and nine assists by Nikola Jokic. 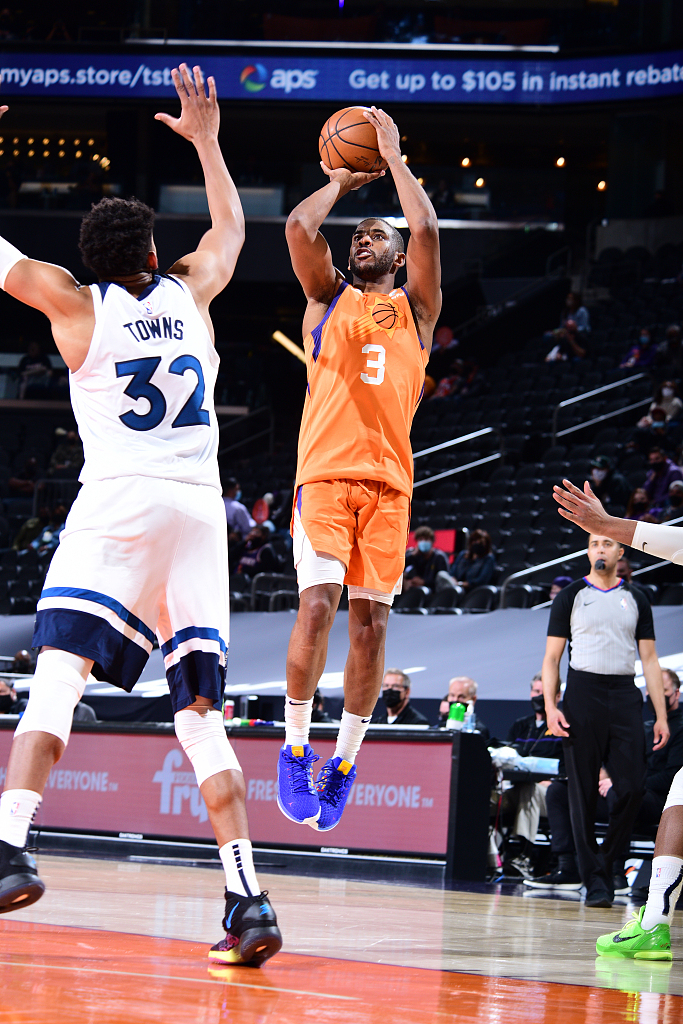 Chris Paul #3 of the Phoenix Suns shoots in the game against the Minnesota Timberwolves at Phoenix Suns Arena in Phoenix, Arizona, U.S., March 19, 2021. /CFP

The Suns refused to fall into the same pit after losing to the Timberwolves one day ago. Seven of their players reached double-digit points, four from the starting-lineup and three from the bench unit. Devin Booker's 15 points in the first half put the Suns onto a 10-point lead. When the Timberwolves launched a counter-attack from the third quarter, Chris Paul stood out to stabilized the floor with 11 points in Q3 and seven points to seal the win in Q4. 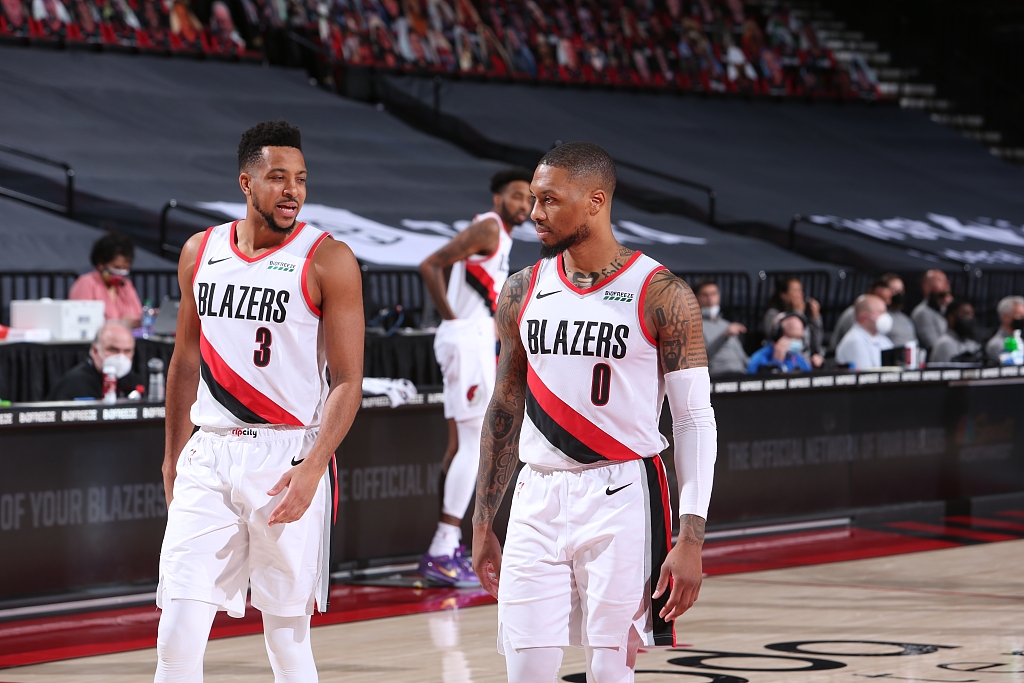 C.J. McCollum #3 and Damian Lillard #0 of the Portland Trail Blazers look on in the game against the Dallas Mavericks at Moda Center in Portland, Oregon, U.S., March 19, 2021. /CFP

This was the fourth game C.J. McCollum has played since returning from injury. He was under strict time limit and obviously still adapting himself in the previous three games, but at Moda Center on Friday, Rip City saw the McCollum they had been waiting for so long.

Having gone 11-23 in field goals and 7-13 in triples, McCollum dropped team-high 32 points. He scored 10 and 11 points respectively in the first and last quarter. While Damian Lillard needs a few minutes to take a breath, McCollum made sure that the team still have their orchestrator and go-to-guy.

Luka Doncic did his best for the Mavericks getting 38 points, nine rebounds, and nine assists. So was Tim Hardaway Jr., who drained seven triples in Friday's game. Nonetheless, Kristaps Porzingis needs to do more than 11 points and eight rebounds if he wants to help his team win. The Mavericks cannot afford to watch him score zero points in two-quarters of a game or post up in front of 1.88-meter-tall Lillard, shoot a fadeaway and miss it.