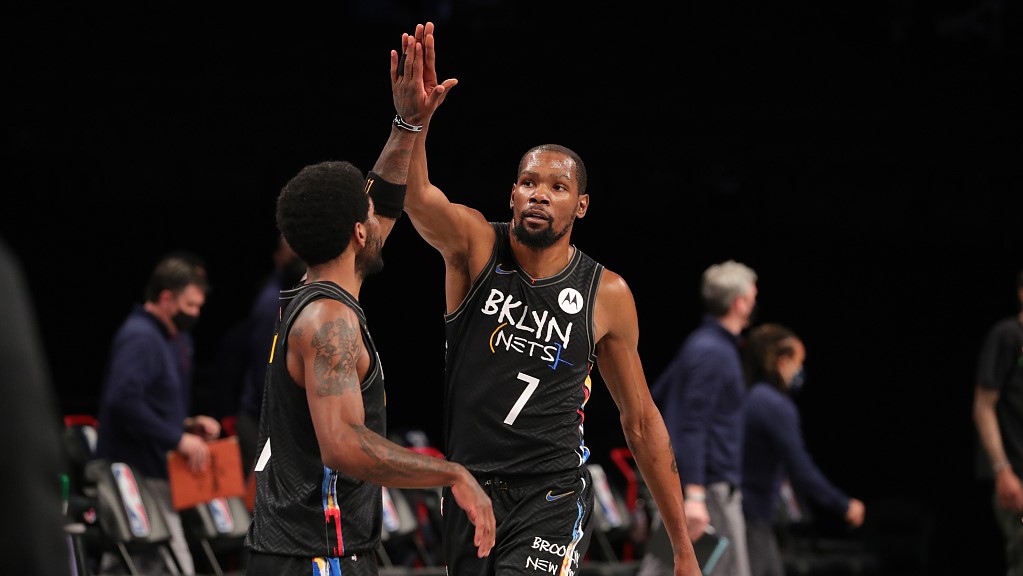 Kevin Durant (#7) of the Brooklyn Nets gives his teammate Kyrie Irving a high five in the game against the New Orleans Pelicans at the Barclays Center in Brooklyn, New York, U.S., April 7, 2021. /CFP

The Brooklyn Nets walked over the visiting New Orleans Pelicans 139-111 at Barclays Center on Wednesday. Kevin Durant returned from injury and scored 17 points for the home team.

The last time Durant appeared in a game for the Nets happened almost two months ago. The team were extremely careful with his hamstring injury. Not only did they put him on the bench in the first quarter, but Durant was only given 18 minutes on the floor on Wednesday.

That's all the "Slim Reaper" needed to do his job. Durant was 5-5 on the field, 2-2 from the 3-point line and 5-5 in free throws to drop 17 points, seven rebounds and five assists. He only played in the second and third quarter in which the Nets led 43-26 and 36-23 respectively. 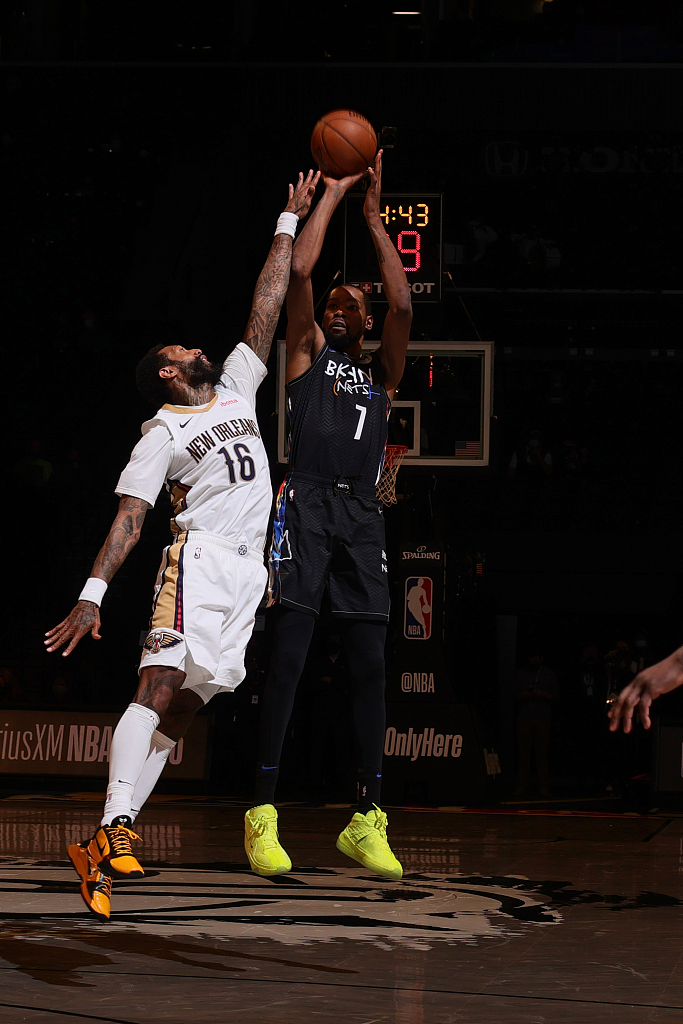 Kevin Durant (#7) of the Brooklyn Netsa shoots in the game against the New Orleans Pelicans at the Barclays Center in Brooklyn, New York, April 7, 2021. /CFP

He also became the second person to put down at least 15+5+5 at three 100 percent in one game for the Nets since 1984. The first person was Caris LeVert.

No one ever has to worry about Durant's offensive role. More importantly, he was trying to establish chemistry with new teammates in the first game since he returned. Four of his six turnovers in Wednesday's game took were committed in passing and three of them were targeting LaMarcus Aldridge and Blake Griffin, the two new guys who joined during Durant's absence. 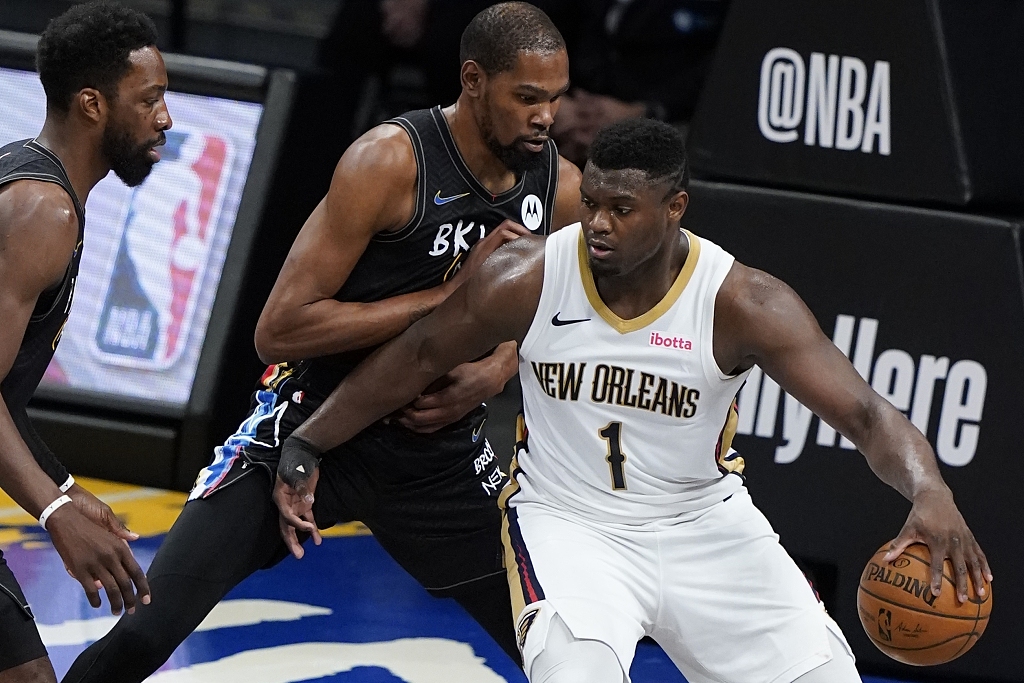 Kevin Durant of the Brooklyn Nets defends Zion Williamson (#1) of the New Orleans Pelicans in the game at Barclays Center, April 7, 2021. /CFP

Durant's return also gave coach Steve Nash more rotating options. KD's size and defense are all necessary to a perfect small-ball squad. His scoring and passing ability also enable the team to go even faster when he's on the court.

"The last month or so, it's just been me working out every day, playing here and there with my teammates. Mainly just working out and just trying to stay ready, keeping my stamina up and sharpening up my skills so I can transition back smoothly. It's good to get a few of those sessions in before I went and jump into an NBA game. It's been too long for me … I'm just excited to get back out there," said Durant.

Other games on Wednesday (away teams come first): 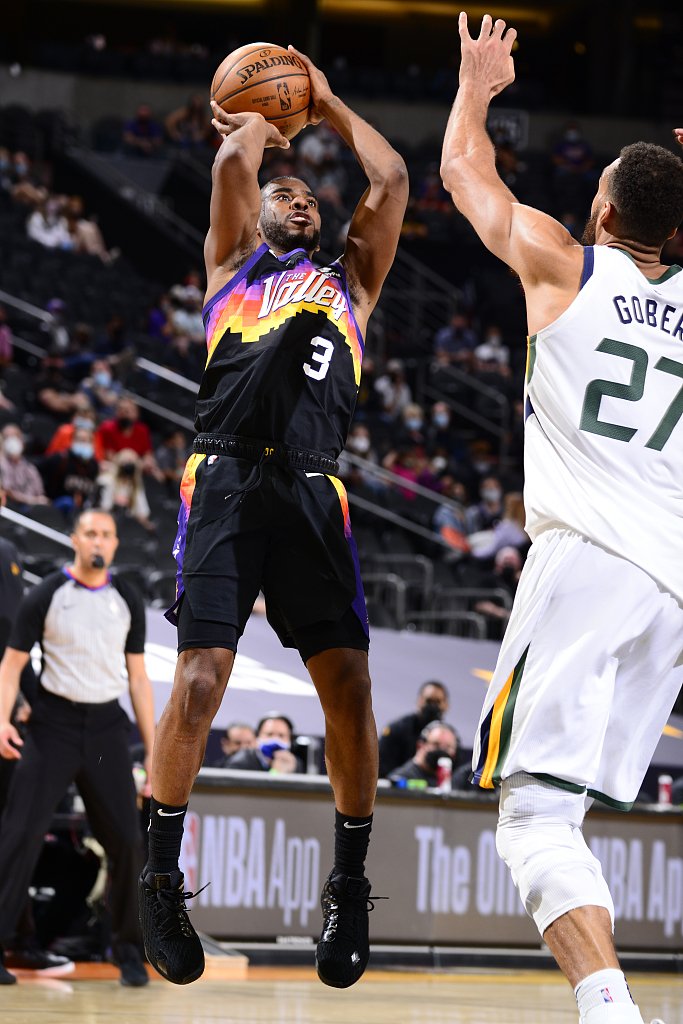 The Suns achieved their seventh win in a row beating the league's No. 1 team at home in overtime. Devin Booker scored team-high 35 points for the Suns, including going making three consecutive shots in OT.

But Chris Paul was the biggest contributor to the Suns' win on Wednesday. Destroying the Jazz's defense in the middle range with Booker did not tell the whole story of Paul's work. Every time he drove in and faced Rudy Gobert, Paul was throwing the French Giant into a dilemma: If Gobert stepped up and tried to contest Paul's shooting, the ball would fly to Deandre Ayton open under the rim at the blink of an eye; if Gobert remained in the paint, he would have to watch Paul keep burying perimeter shots one by one like eating a sandwich.

Of course, Ayton did more than putting in easy baskets. He grabbed seven offensive rebounds and turned them into eight second-chance points. He and Jae Crowder together had 24 rebounds, and they were why the Suns led 61-45 over the Jazz in this area. 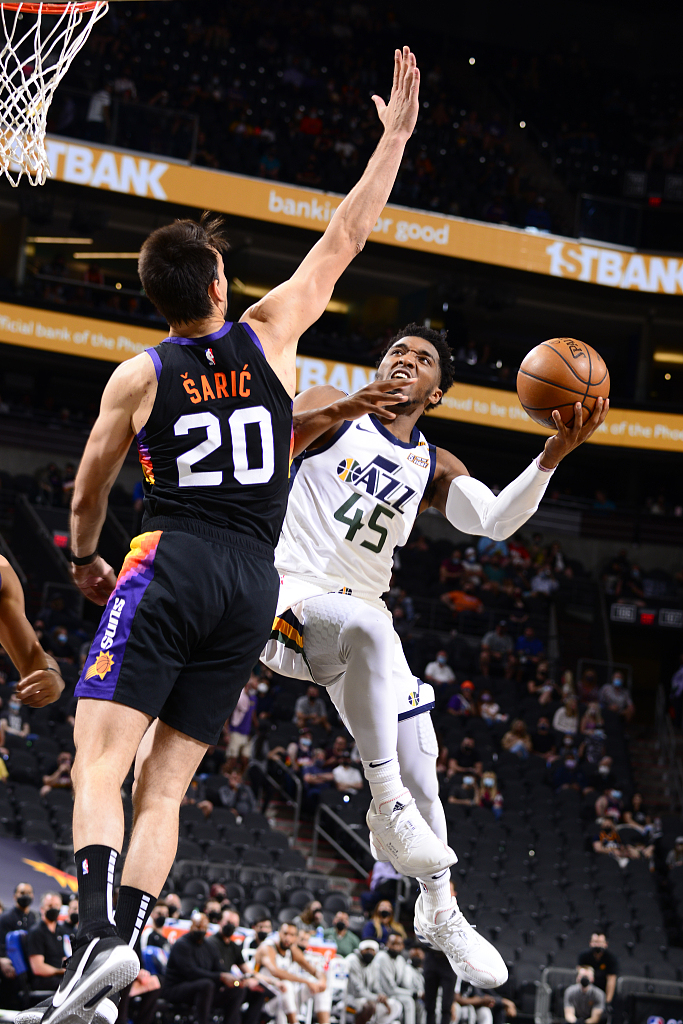 Donovan Mitchell came so close saving the day when the whole team of the Jazz were freezing outside. Bojan Bogdanovic and Mike Conley went a combined 2-15 from the arc. Jordan Clarkson was 1-6 from there in the first half. Mitchell himself (4-12) was no much better.

However, Mitchell still claimed the court-high of 41 points by charging the rim (9-17) again and again. The Jazz would have lost in regular time if it weren't for his last-minute 3-pointer. The team will expect Mitchell to perform like this in the future when they cannot find a solution on the 3-point line.