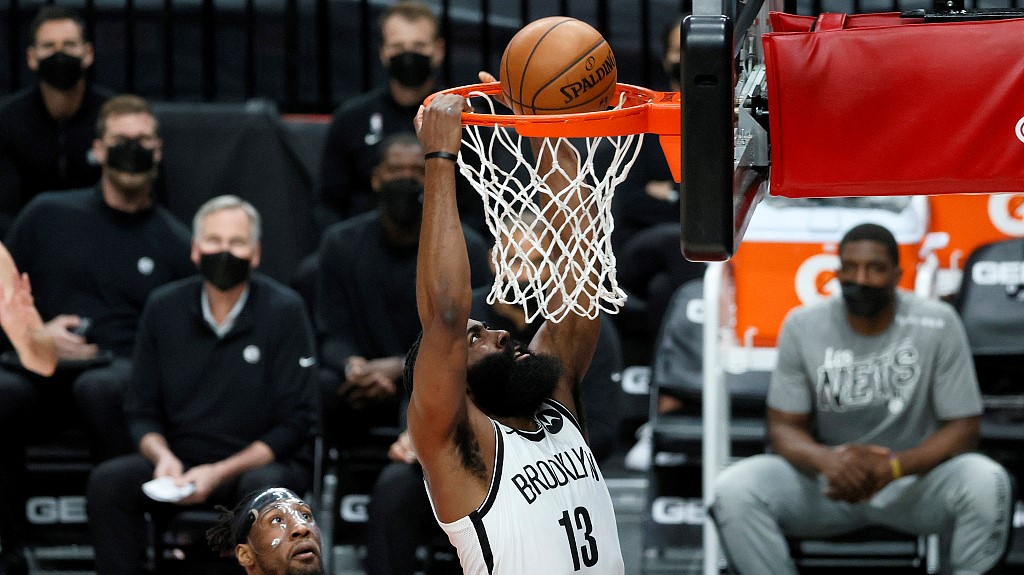 James Harden #13 of the Brooklyn Nets dunks in the game against the Portland Trail Blazers at Moda Center in Portland, Oregon, U.S., March 23, 2021. /CFP

Kyrie Irving was not with the Nets because of a family issue, so Harden had to face Damian Lillard and C.J. McCollum alone. He was reportedly suffering from a neck problem which affected his shooting and partly explained why he missed all seven 3-pointers. Harden worked hard to drive into the paint, but he was not comfortable there going 7-17. Fortunately, he still managed to earn 13 free throws and made 11 of them. 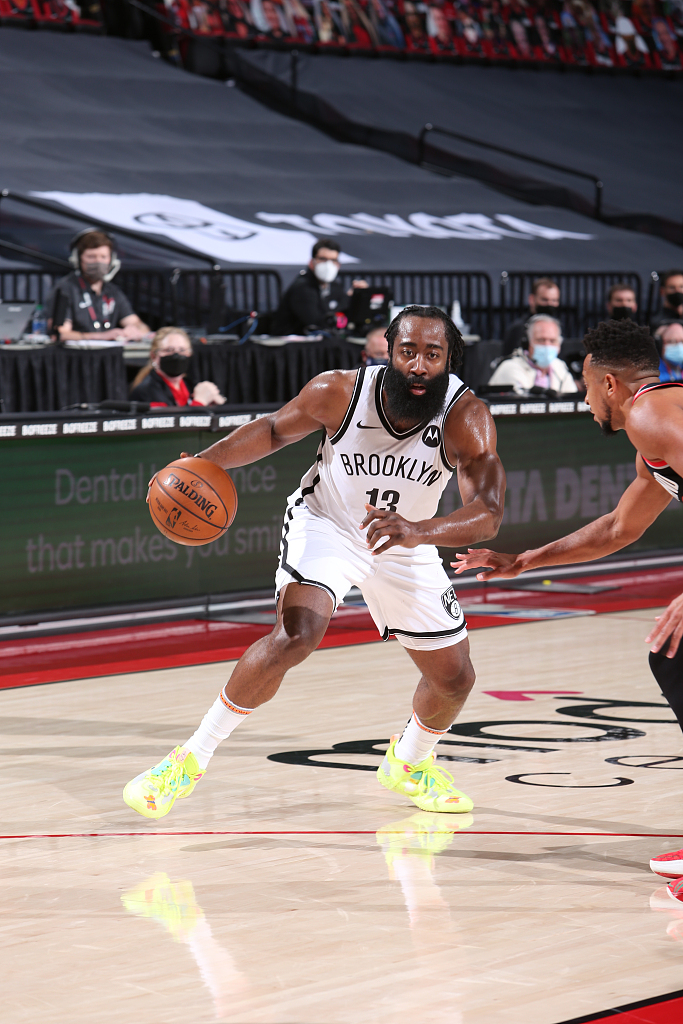 James Harden #13 of the Brooklyn Nets dribbles in the game against the Portland Trail Blazers at Moda Center, March 23, 2021. /CFP

The other thing he did well was orchestrating. Though he was not in his best form, Harden still knew how to exploit his individual threat to distract the opponents' defense and help his teammates score. That's how he delivered five assists in both the third and the fourth quarters. If it weren't for Harden, Nicolas Claxton could not go 8-10 to get 16 points. 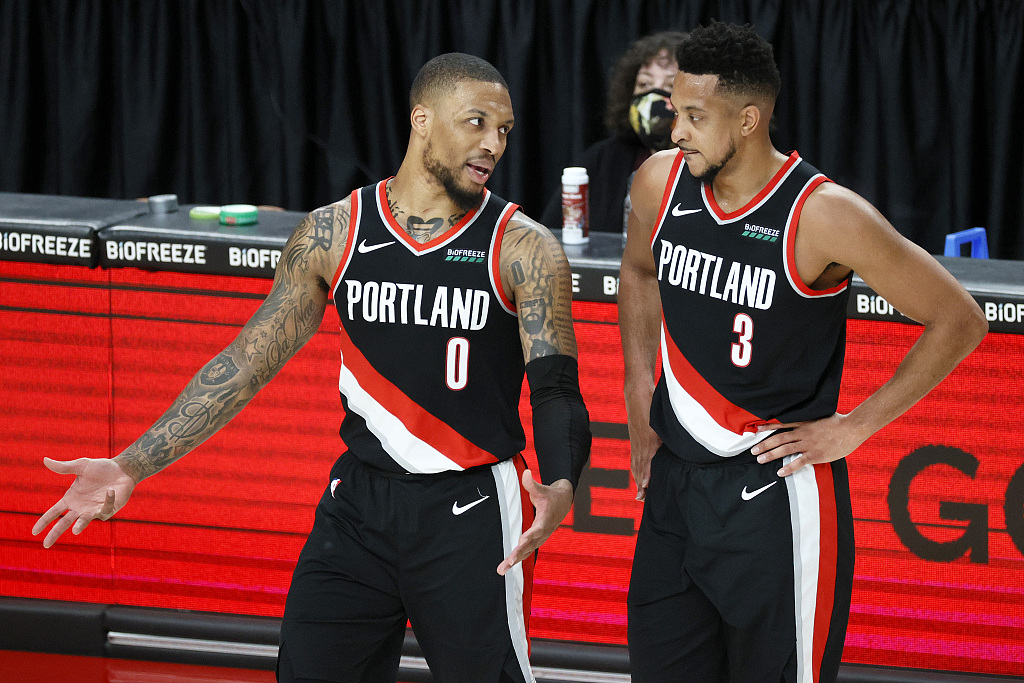 Damian Lillard #0 and C.J. McCollum of the Portland Trail Blazers talk to each other in the game against the Brooklyn Nets at Moda Center, March 23, 2021. /CFP

Both Lillard and McCollum lost their target on the rim from the third quarter. The two together were 1-10 in Q4 and missed all seven attempts from downtown. Kanter was still trying in the second half, but his offensive rebounding alone was not enough to support Rip City's offense. If Robert Covington had not made those two long threes in the last quarter, the game's final score wouldn't have been so close.

Other games on Tuesday (away teams come first): 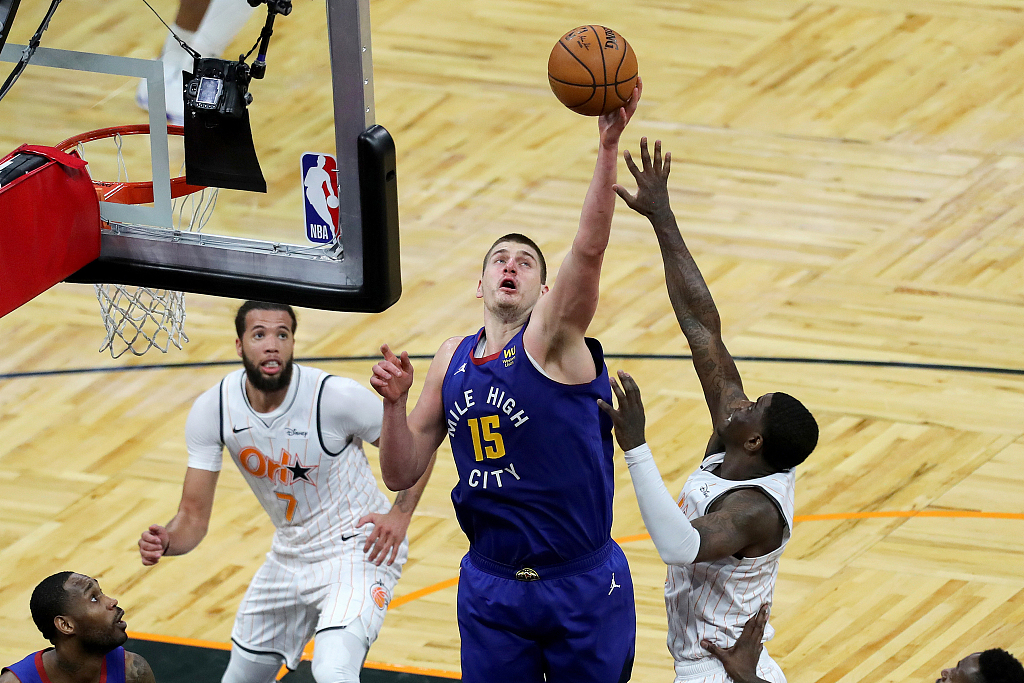 Nikola Jokic #15 of the Denver Nuggets grabs a rebound in the game against the Orlando Magic at Amway Center in Orlando, Florida, U.S., March 23, 2021. /CFP

Another dominated game by Nikola Jokic, who scored a triple-double of 28 points, 15 rebounds and 10 assists. He's the reason why the Nuggets could establish a 22-point lead (61-39) after the first half. Though the Magic returned a 30-19 run in Q3, Jamal Murray, who was 4-15 in the first three quarters, claimed 10 points in the last quarter to seal the win for his team.

Aaron Gordon previously already requested the Magic to trade him, and there are several teams interested in making a deal. However, almost all trade negotiations include Evan Fournier, who had court-high 31 points in Tuesday's game. 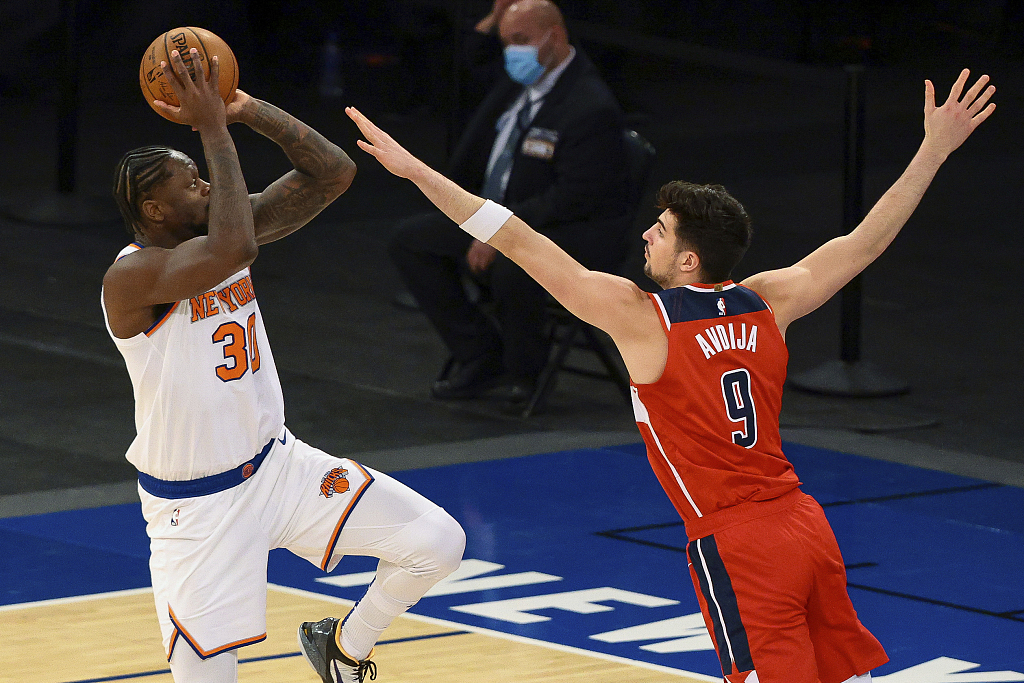 Neither of the Wizards' star duo Russell Westbrook and Bradley Beal, could find the rim at Madison Square Garden. The whole team making only nine triples was not good enough to win the game.

However, the biggest reason behind their painful loss was the Wizards' poor defense. Six of the Knicks reached double-digit points. Julius Randle got 37 points. R.J. Barrett and Alec Burks both had 20+points. Mitchell Robinson even scored a double-double of 16 points and 12 rebounds off the bench. 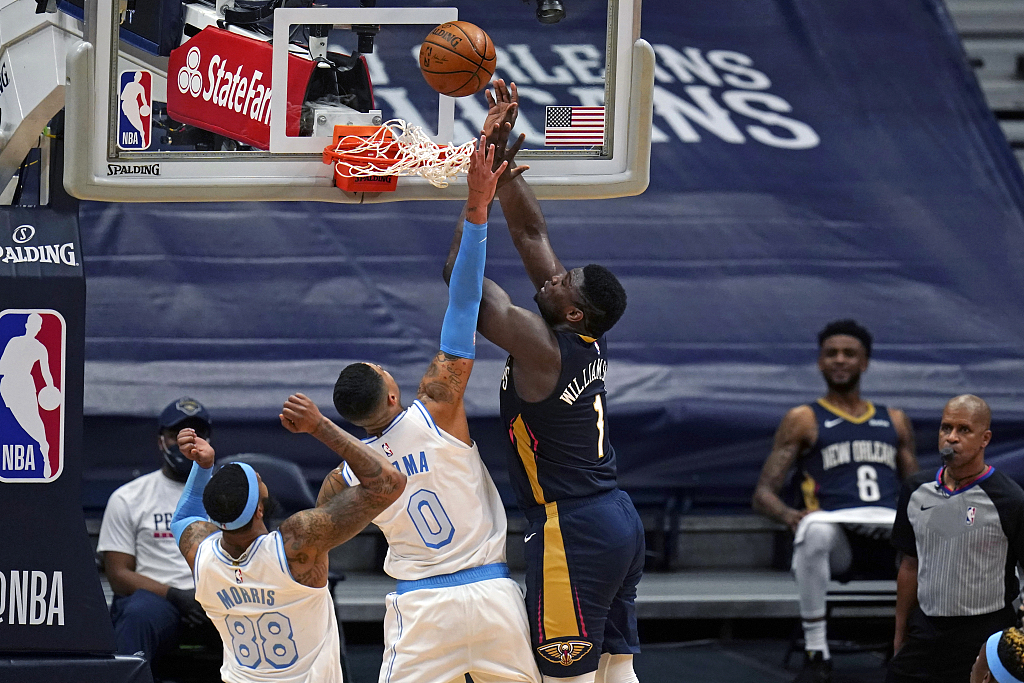 The Lakers buried 18 triples at Smoothie King Center on Monday, something they should have cheered for considering their disappointing shooting performance recently. Nonetheless, they could not do it after such a big loss.

Without Anthony Davis, Marc Gasol, and LeBron James, the Lakers couldn't do anything to even slow Zion Williamson down under the rim. The Pelicans led in both points in the paint (62-32) and rebounds (53-34). Williamson was 9-13 to score 18 points under the rim, and he earned 10 free throws (nine made). 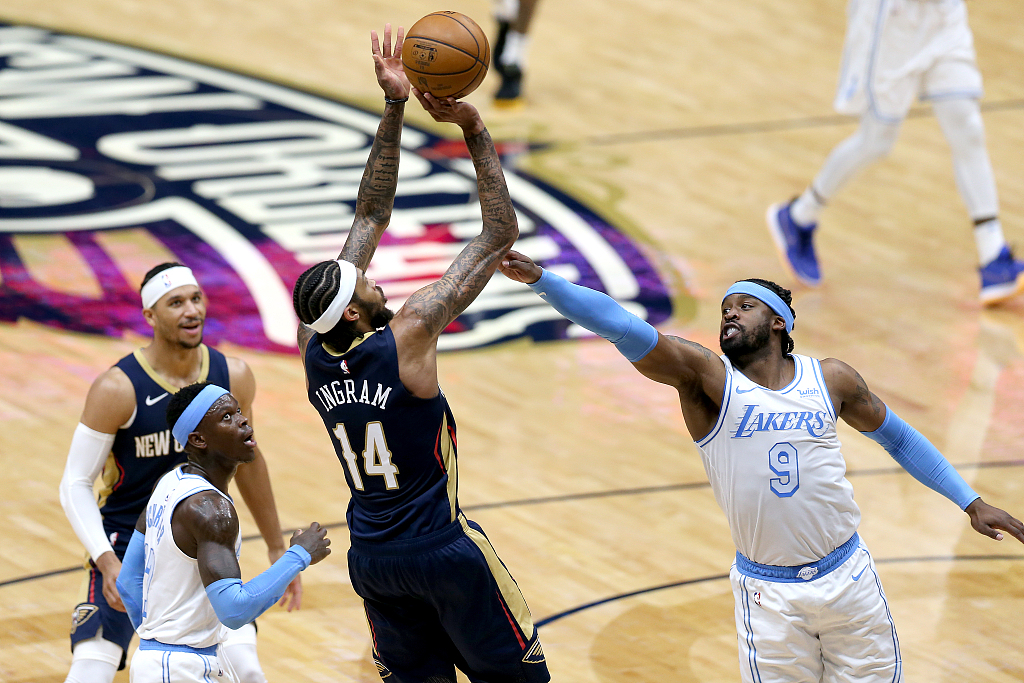 Brandon Ingram #14 of the New Orleans Pelicans shoots in the game against the Los Angeles Lakers at Smoothie King Center, March 23, 2021. /CFP

Brandon Ingram, who was part of the package sent to the Pelicans in exchange for Davis, was even thirstier to prove himself in front of the purple and gold. He was 14-21 from the field and 4-6 in triples to put down court-high 36 points. He couldn't have pocketed the first win over the Lakers in his career without such remarkable performance.

It will take James reportedly a month to recover from a high ankle sprain. There's no telling whether Davis or Gasol will come back or not during that period of time. So it's the job of the rest of the team to make sure that the team won't have too much to catch up before their best players return. 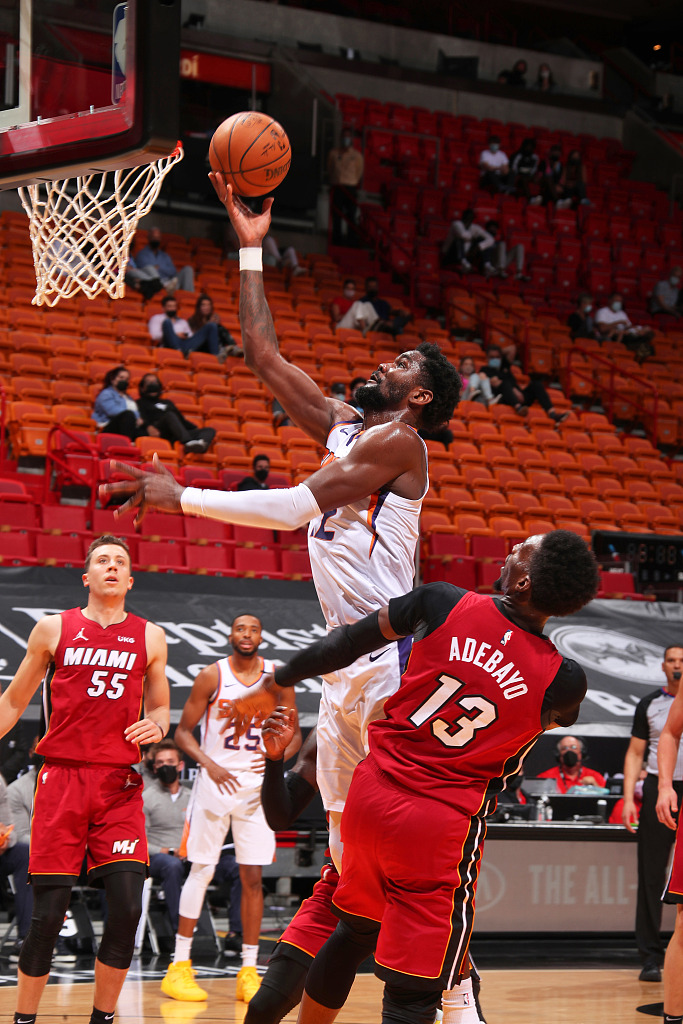 Deandre Ayton (C) of the Phoenix Suns shoots in the game against the Miami Heat at American Airlines Arena in Miami, Florida, U.S., March 23, 2021. /CFP

The Suns took their third win in a row after beating the Heat on the road. Chris Paul only played 27 minutes in the game, and scoring eight points, and nine assists were not the best performance he could make. Fortunately for the Suns, their young blood stood out.

Devin Booker, though missed six of his eight attempts from downtown, he went 8-11 in two-point jumpers, which was nothing but lethal. Deandre Ayton dropped a double-double of 17 points and 16 rebounds plus three blocks in front of All-Star big man Bam Adebayo. All 12 of his shots were taken in the paint, and Ayton made eight of them. That toughness is what both the team and their fans want to see the most. 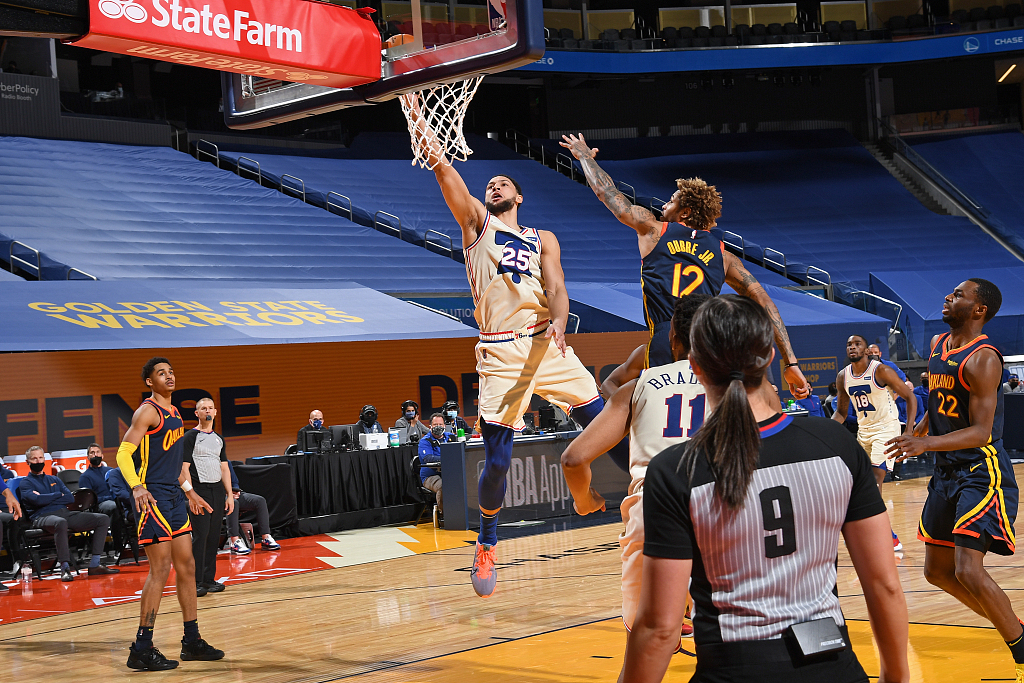 Ben Summons #25 of the Philadelphia 76ers drives toward the rim in the game against the Golden State Warriors at Chase Center in San Francisco, California, U.S., March 23, 2021. /CFP

Both teams lacked their best players, but the problem is, the 76ers still have Ben Simmons and Tobias Harris, who are way more reliable than what the Warriors have.

The two stars dropped 47 points, 21 rebounds, and eight assists together, putting the 76ers on an 18-point lead from the first quarter. The Warriors spent the following three quarters trying to catch up, and they did a really good job in the third quarter with a 40-21 run. However, when the 76ers put on more defensive pressure in the last quarter, they limited the Warriors' points to only 13 and killed the game.