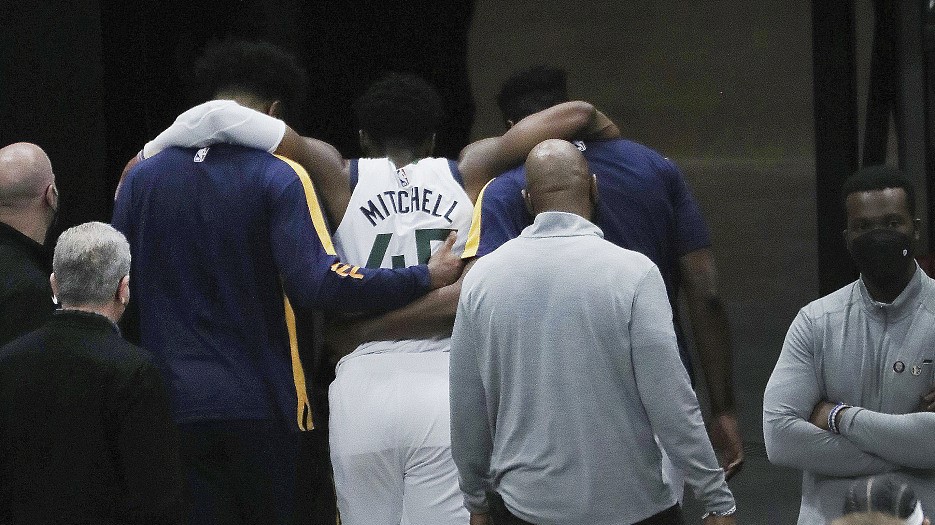 The Utah Jazz continued to win at home as they beat the Indiana Pacers 119-111 at Vivint Arena on Friday. However, the team's franchise player Donovan Mitchell quit the game after suffering a right ankle injury in the third quarter.

Before he returned to the locker room with the help of teammates, Mitchell dropped 22 points, four rebounds and two assists. The Jazz could not have wiped the 17-point trail without his efforts.

Mitchell's injury is low ankle sprain, according to ESPN, and the result of X-rays is negative. He will receive an MRI later before further evaluation and treatment can proceed. 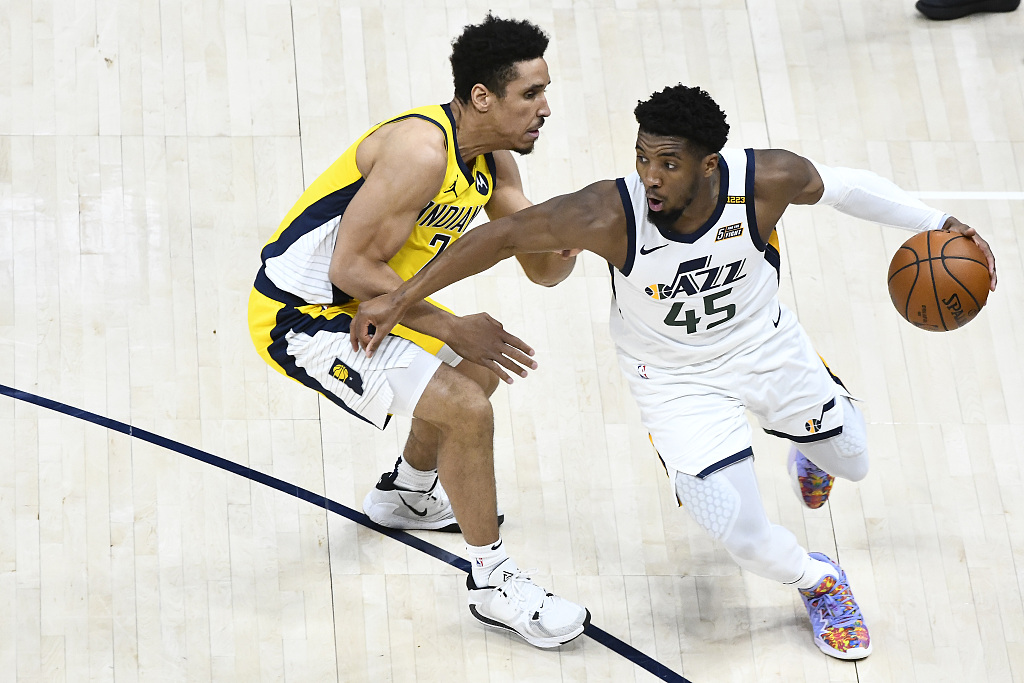 Donovan Mitchell (#45) of the Utah Jazz tries to penetrate in the game against the Indiana Pacers at Vivint Arena, April 16, 2021. /CFP

"Obviously we hope that it's nothing serious, but they're in the process of doing everything they can do to assess that," said Quin Snyder, head coach of the Jazz.

The Jazz are currently No. 1 in the Western Conference with a 42-14 record. Considering that they will meet the Los Angeles Lakers (twice in a row), the Denver Nuggets and other strong opponents in the 16 games left, the team will need Mitchell if they don't want to be surpassed by the Phoenix Suns (40-15).

Other games on Friday (away teams come first): 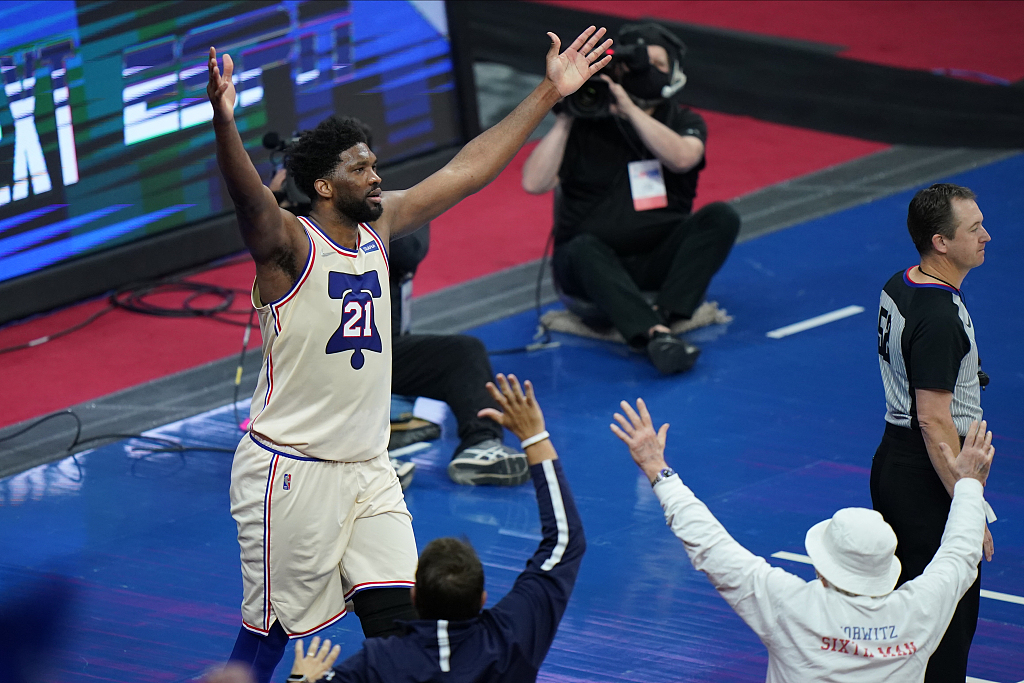 Joel Embiid celebrates after making a shot in the game against the Los Angeles Clippers at Wells Fargo Center in Pennsylvania, Philadelphia, U.S., April 16, 2021. /CFP

Though the Clippers came to Wells Fargo Center without Kawhi Leonard, they did not make the home game comfortable for the 76ers. The team drained 19 triples at 48.72 percent, almost achieving a comeback victory in the last quarter. Paul George put down 37 points for the Clippers and this is his fifth straight 30+point game.

Compared with the Clippers, the 76ers built their game on solid aggressiveness and a huge part of that came from Joel Embiid who earned 18 free throws and made 16 of them to score 36 points and 14 rebounds. By contrast, the entire Clippers team only got 16 free throws. 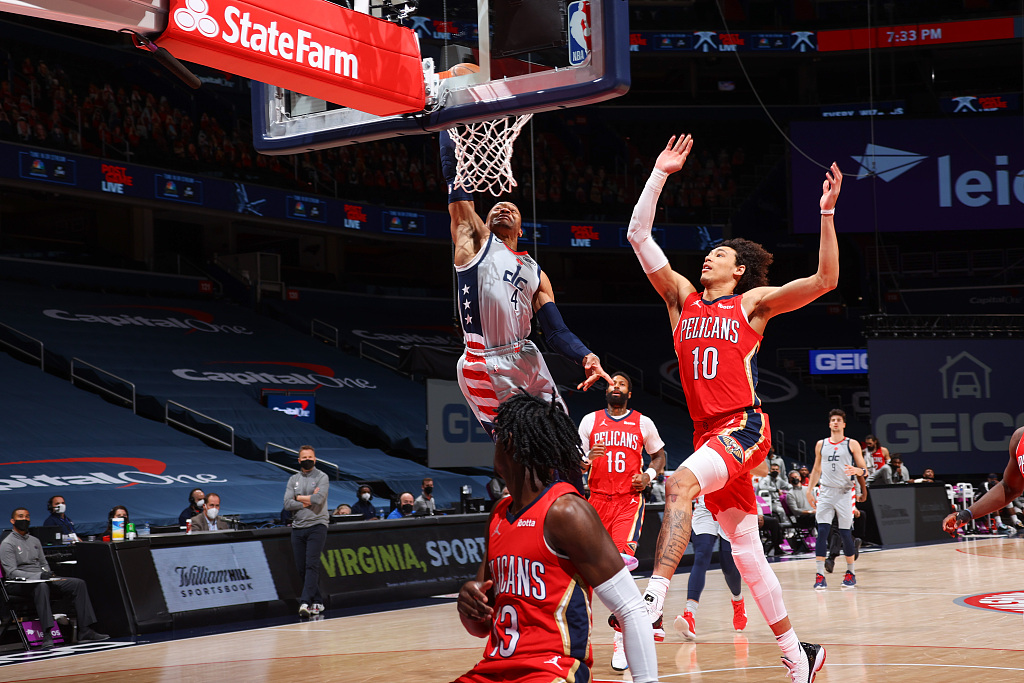 Russell Westbrook (#4) of the Washington Wizards dunks in the game against the New Orleans Pelicans at Capital One Arena in Washington, D.C., April 16, 2021. /CFP

Russell Westbrook missed an assist for his seventh consecutive triple-double on Friday night but it's worth it. He managed to lead the Wizards to a third win in a row edging over the Pelicans at Capital One Arena. He was fouled by Zion Williamson shooting the last attempt in the middle range in the last second of overtime. Then Westbrook, who has averaged 62.6 percent at the free throw line this season, made both shots to seal the win for his team.

The Wizards, the Chicago Bulls and the Toronto Raptors are currently No. 12, No. 11 and No. 10 in the East with the same record. The Wizards are not facing a very challenging schedule in the future so they are in a relatively advantageous position for playoff qualification competition. 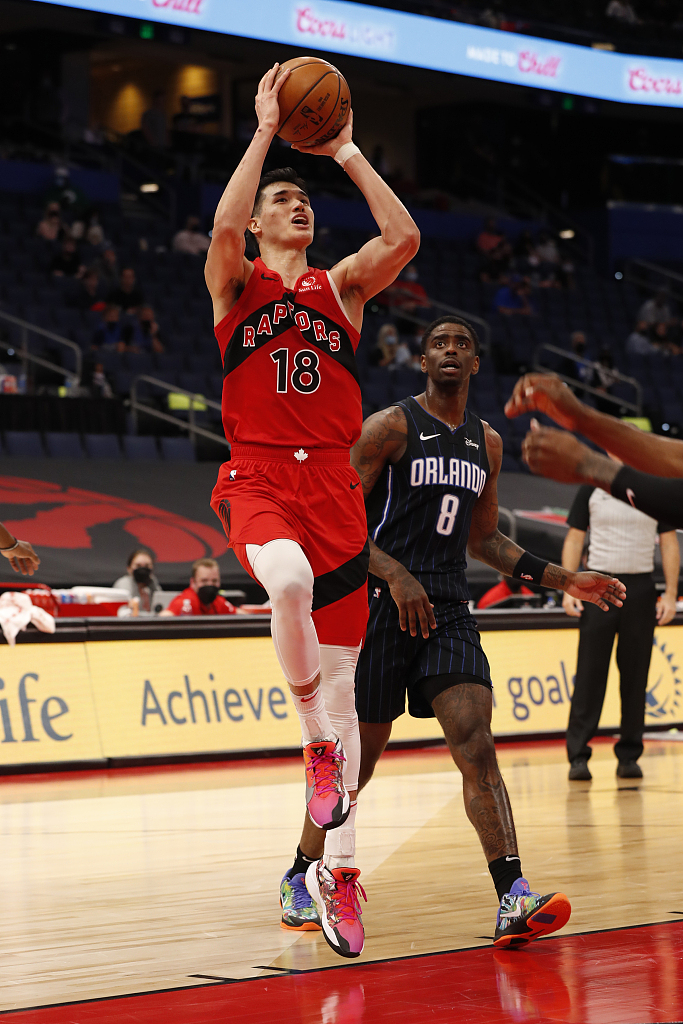 Yuta Watanabe (#16) of the Toronto Raptors shoots in the game against the Orlando Magic at Amalie Arena in Tampa, Florida, U.S., April 16, 2021. /CFP

The result of this game won't matter much for either side but the performance of a player on the court deserves more attention, especially for the Japanese and Chinese men's national basketball teams.

26-year-old Yuta Watanabe went 7-11 to get 21 points and six rebounds for the Raptors. The Japanese swingman came into coach Nick Nurse's favor because he always exerts the utmost strength. Japan will be happy to have another NBA rotator next to Rui Hachimura in their franchise while China should be alert to the rise of their neighboring challenger in Asian basketball competitions. 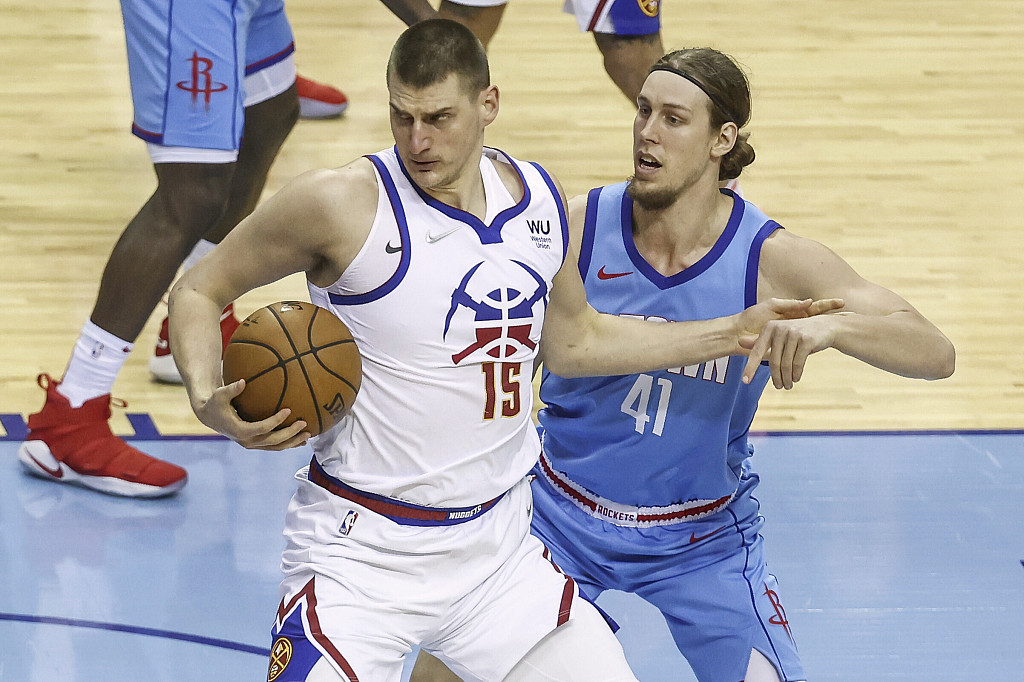 Nikola Jokic (#15) of the Denver Nuggets holds the ball in the game against the Houston Rockets at Toyota Center in Houston, Texas, U.S., April 16, 2021. /CFP

It took Nikola Jokic 27 minutes to make another dominant night after dropping 29 points, 16 rebounds and seven assists. His existence on the floor and the leading position of MVP race will make Denver fans forget at least a bit of the pain of Jamal Murray's absence.

In a way, the Rockets are also winners after this game. They are now at the bottom of the league after five straight losses. They have won only 14 games so far. As along as they don't finish the season getting more wins than the Magic (currently 18 wins), the Rockets should be able to keep a top 4 pick for this year's NBA Draft without being "robbed" by the Oklahoma City Thunder. 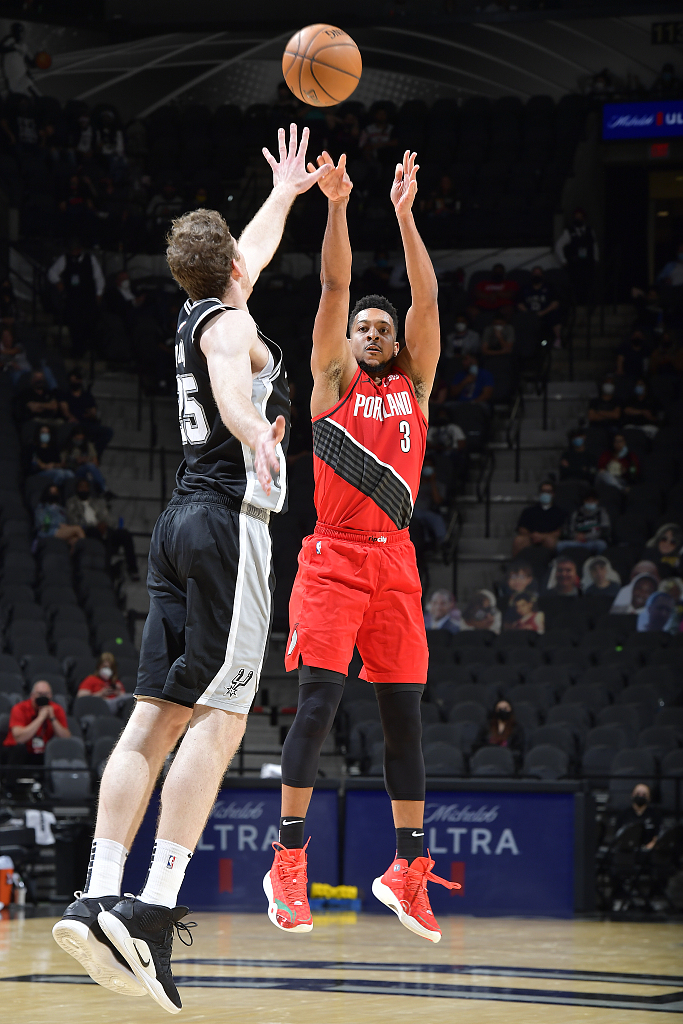 Damian Lillard sat on Friday's road game at AT&T Center because of strained hamstring. Fortunately for the Trail Blazers, C.J. McCollum shot down court-high 29 points to put an end to his team's losing streak of two. The Spurs had three chances of beating the buzzer in the last 10 seconds but DeMar DeRozan, Rudy Gay and Jakob Poeltl all missed their shots. 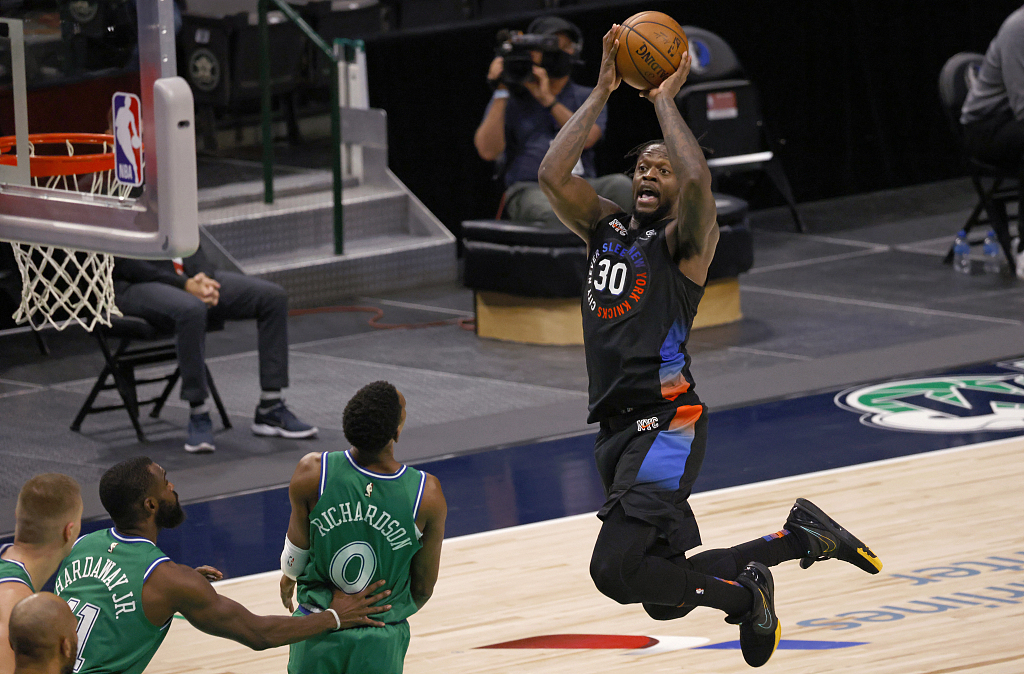 Julius Randle (#30) of the New York Knicks shoots in the game against the Dallas Mavericks at American Airlines Center in Dallas, Texas, U.S., April 16, 2021. /CFP

Despite that he put down 22 points, eight rebounds and 19 assists, Luka Doncic failed to bring victory to his team at home on Friday. Julius Randle destroyed the Mavericks' defense by scoring 44 points, 10 rebounds and seven assists. He became the first Knicks member in 36 years to get at least 40+10+5 in one game. The last one who did it was Bernard King.

With 15 games to go, the Knicks (30-27) are comfortable No. 6 in the East and remain even hopeful to compete for home advantage (top 4) in the playoffs. The last time they played postseason games happened in 2013.