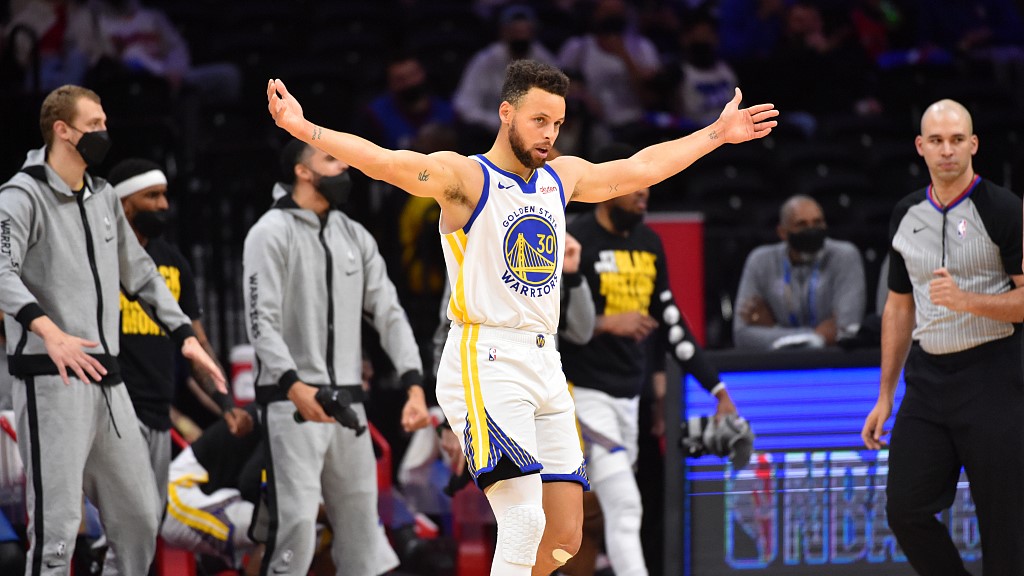 Stephen Curry (#30) celebrates after making a shot in the game against the Philadelphia 76ers at Wells Fargo Center in Pennsylvania, Philadelphia, U.S., April 19, 2021. /CFP

The Golden State Warriors upset the Eastern Conference No. 1 Philadelphia 76ers 107-86 at Wells Fargo Center on Monday after another fantastic night by Stephen Curry.

On this very night, Devin Booker beat the buzzer on the free-throw line for the Phoenix Suns. Nikola Jokic dropped 47 points, 15 rebounds and eight assists in two overtimes to lead the Denver Nuggets to a comeback win at home.

However, as Magic Johnson tweeted: "It's hard to deny Steph Curry from being the NBA's MVP! He is the #1, #2, and #3 option for the Warriors and is STILL dominating!!" 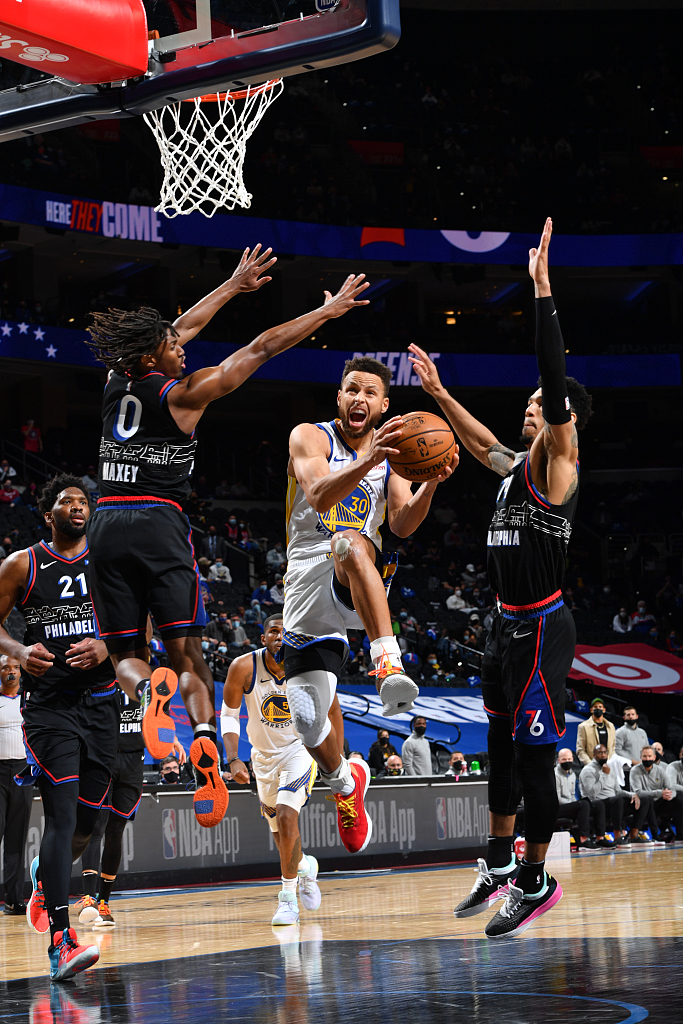 Stephen Curry (#30) of the Golden State Warriors drives toward the rim in the game against the Philadelphia 76ers at Wells Fargo Center, April 19, 2021. /CFP

Having gone 28-14, 10-17 and 11-12 from the field, downtown and free throw line, respectively, Curry scored 49 points in Monday's game. That's the 11th straight 30+point game and the eighth 40+point one. It's also the 21st game of Curry's career in which he drained at least 10 triples and his sixth time to do so this season. As a member of the Splash Brothers, Klay Thompson has done it five times so far in his career.

After Tuesday night, Curry (31.4) surpassed Bradley Beal (31.1) to lead the league in average points per game.

Curry has been nothing but crazy in April. He averaged 40.8 points and 7.2 triples at a 54.5-percent field goal rate and 50.3-percent 3-point rate. The 33-year-old left five 40+point games in this month so far, the most in history, more than both Kobe Bryant and Michael Jordan. 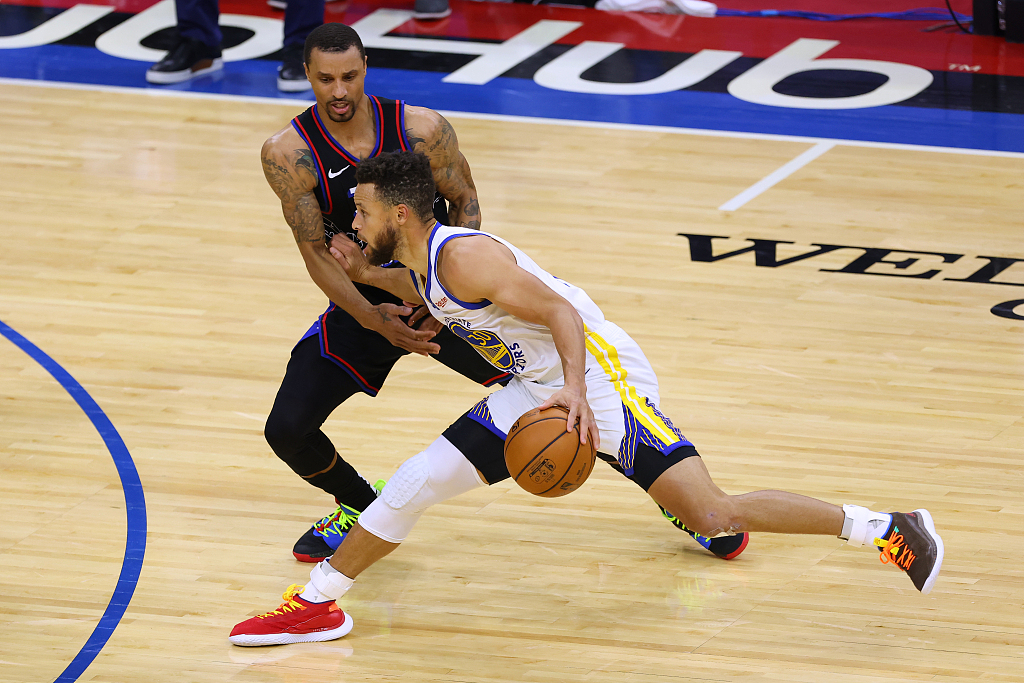 Stephen Curry (#30) of the Golden State Warriors dribbles the ball to beat George Hill of the Philadelphia 76ers in the game at Wells Fargo Center, April 19, 2021. /CFP

The 76ers did not let Monday's game go on purpose – they could not afford to do that as the Brooklyn Nets are pursuing them more closely than ever. Neither did the 76ers forget how to defend Curry. Double-teaming was nothing but standard protocol. One defender basically glued himself to Curry even when he did not have the ball. When he received the ball, double-teaming would immediately happen when he approached the 3-point line. If Curry somehow broke in, a third defender would not hesitate to spring at him.

All these efforts were for one purpose: Force Curry to pass the ball to his teammates, who in Monday's game, went 5-14 from the arc. Usually, that's not good enough for the Warriors to win the game.

Curry was the one to create exceptions. He kept moving through screens, charging the rim and shooting step-back threes. There have been five games in which a player made seven off-the-dribble 3-pointers. One belongs to Damian Lillard, and the other four were all by Curry.

Seriously, are you really not considering Curry for the MVP this season?

Other games on Monday (away teams come first): 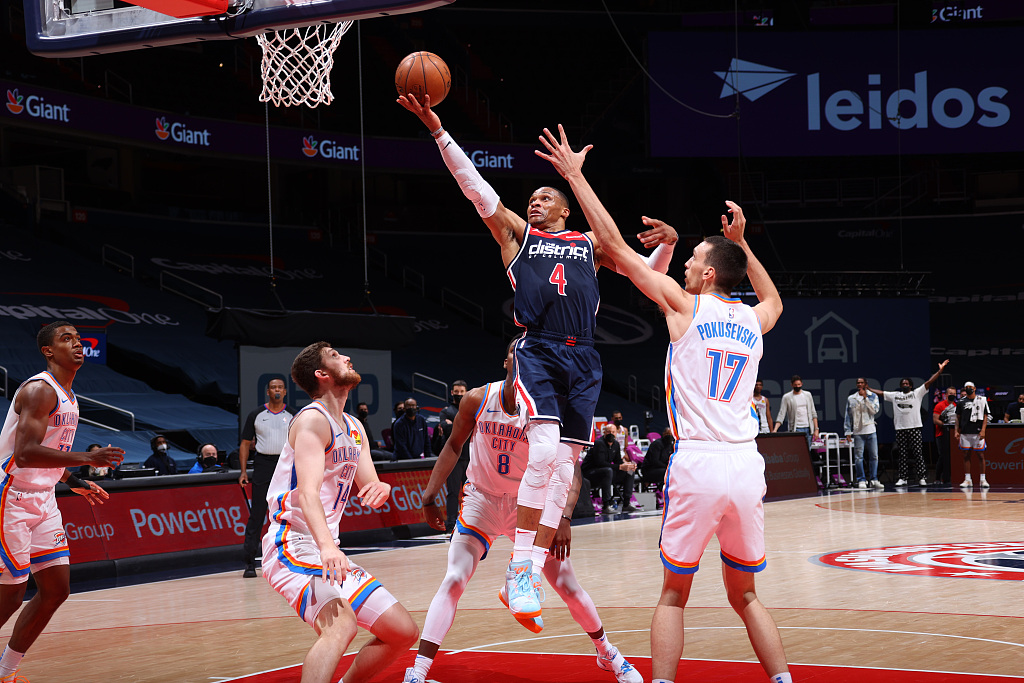 Russell Westbrook (#4) of the Washington Wizards drives toward the rim in the game against the Oklahoma City Thunder at Capital One Arena in Washington, D.C., U.S., April 19, 2021. /CFP

The Wizards achieved their fifth consecutive win after beating the Thunder at home. Russell Westbrook had 13 points, 11 rebounds, and 17 assists for the Wizards, which is his 26th triple-double this season and the 172nd one of his career. He is now only nine triple-doubles away from matching Oscar Robertson (182) to lead everyone else in history. Meanwhile, Westbrook also surpassed James Harden as the assist per game leader in the regular season. 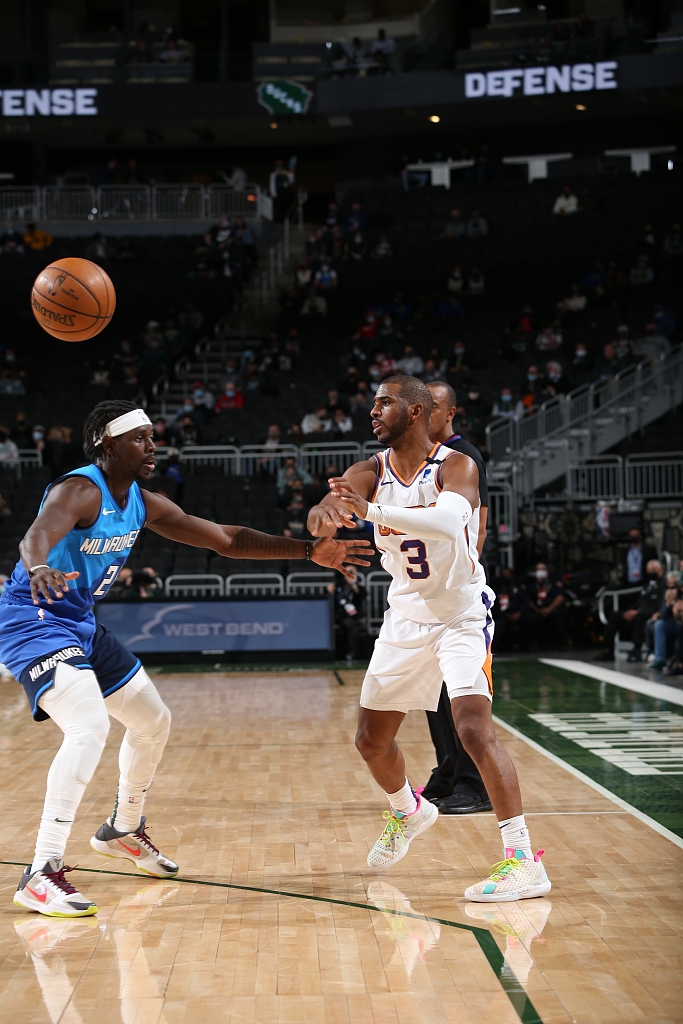 Chris Paul (#3) of the Phoenix Suns passes the ball in the game against the Milwaukee Bucks at Fiserv Forum in Milwaukee, Wisconsin, U.S., April 19, 2021. /CFP

Another record moment for Monday night happened at Fiserv Forum. 35-year-old Chris Paul delivered 13 assists for the Suns and beat Magic Johnson (10.141) to rise to No. 5 (10,145) on the NBA history assists leaders table. Paul is still 189 and 190 away from No. 4 Mark Jackson and No. 3 Steve Nash. Considering that he can still average 8.8 assists per game this season, it only seems a matter of time for Paul to make the top 3 of that table.

Of course, the biggest hero for the Suns on Monday was Booker, who put down 24 points, seven rebounds, and seven assists. Though he had been struggling with his touch in most of the time, when Booker took the Suns' last attempt in OT, neither Jrue Holiday nor P.J. Tucker even hesitated to spring at him.

That's how Booker got the two valuable free throws. Though he missed one, it's enough to get a win for his team. 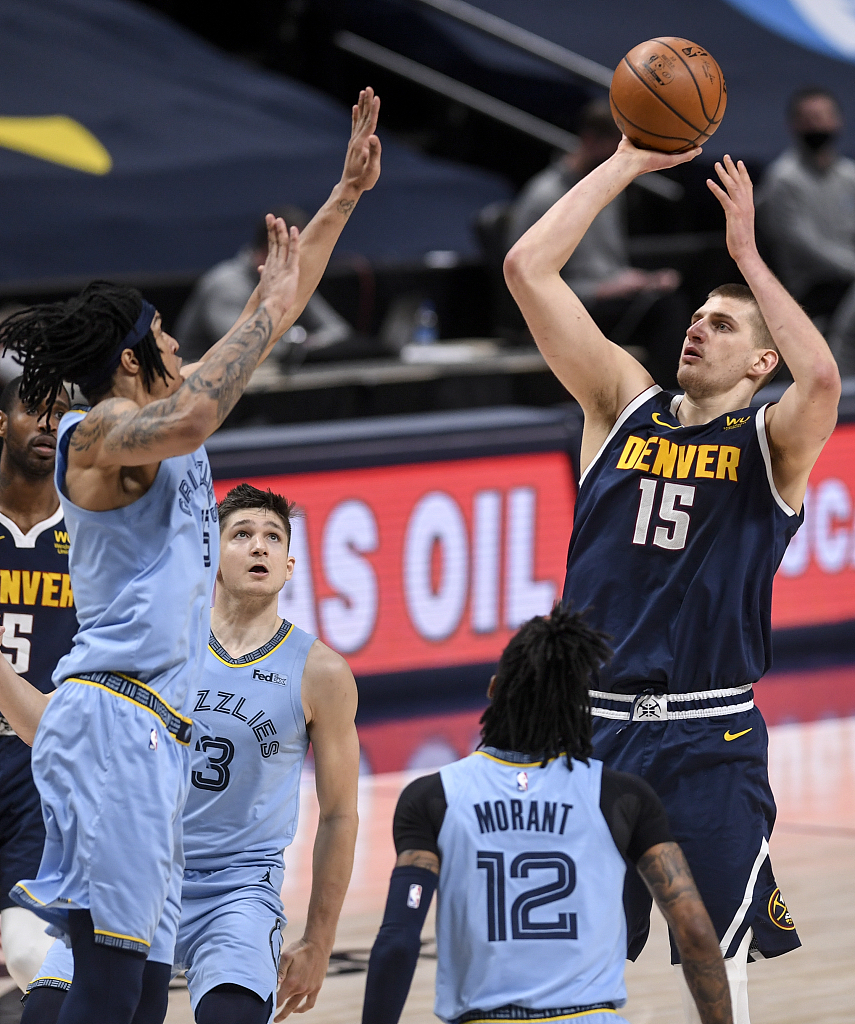 Nikola Jokic (#15) of the Denver Nuggets shoots in the game against the Memphis Grizzlies at Ball Arena in Denver, Colorado, U.S., April 19, 2021. /CFP

Ja Morant scored 36 points, eight rebounds and 12 assists for the Grizzlies at Ball Arena on Monday. This was the third time for him to get at least 30 points and 10 assists in one game, not to mention that he claimed nine points in the first OT, almost reaping the win for his team.

Jokic saved the day again for the Nuggets with 47 points, 15 rebounds and eight assists. The last one who dropped those numbers was Hakeem Olajuwon in 1996. If there is a way to describe how incredible Jokic is, it's what his teammate Aaron Gordon said to The Athletic:

"We still feel like we have enough, especially with 'Joker' man. When you've got that guy on the floor, you have a chance to win every single night. So everybody's got to step up, everybody has to play their best. But if we're doing that, then I feel like we have a good chance to go as far as we want to."