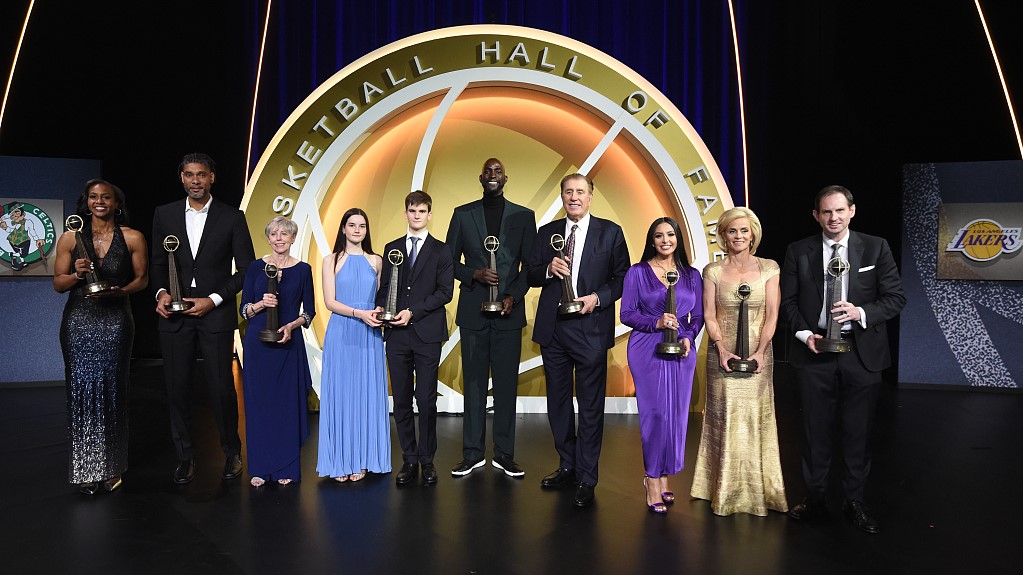 Members Naismith Basketball Hall of Fame Class of 2020 pose for a group photo during Enshrinement Ceremony at Mohegan Sun Arena at Mohegan Sun in Uncasville, Connecticut, May 15, 2021. /CFP

Kobe Bryant, Tim Duncan, Kevin Garnett and another six legends were officially inducted into the Naismith Basketball Hall of Fame Class of 2020 at Mohegan Sun Arena in Uncasville, Connecticut on Saturday.

"There has not been a better Big Three to go in at the same time," said LeBron James. 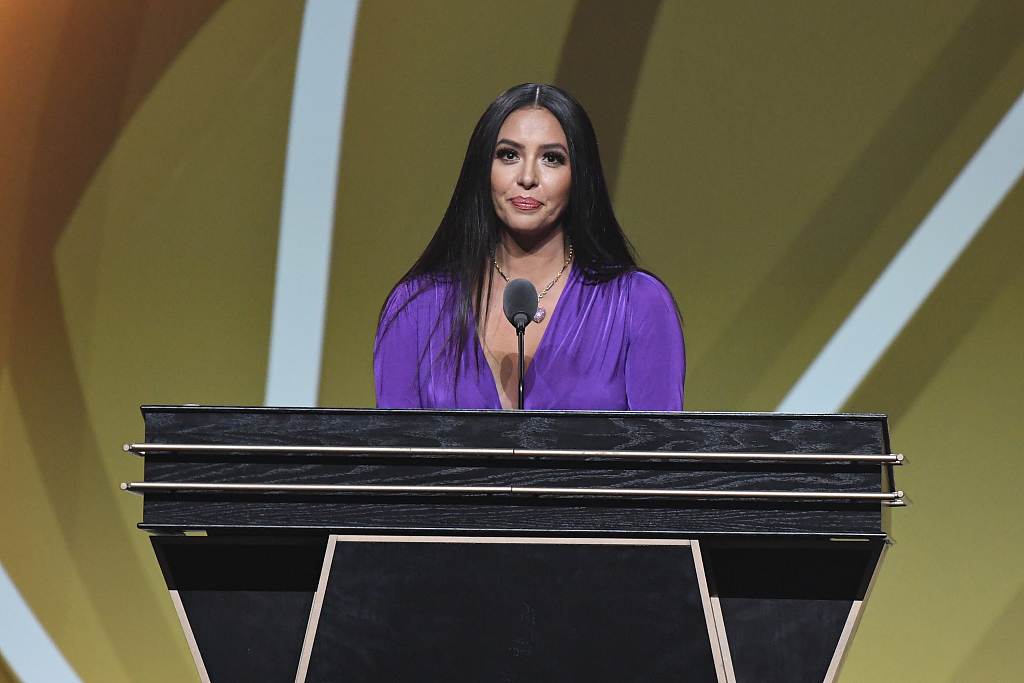 "I used to always avoid praising my husband in public because I felt like he got enough praise from his fans around the world and someone had to bring him back to reality," said Vanessa. "Right now, I'm sure he's laughing in heaven because I'm about to praise him in public for his accomplishments on one of the most public stages. I can see him now, arms folded, with a huge grin saying, 'Isn't this some s***?'"

Having retired from basketball in 2016, Kobe spent more time making investments, making his own sport program and he even won an Academy Award. He also smiled way more than he did as a player. Many might have already forgotten what kind of player Kobe was. 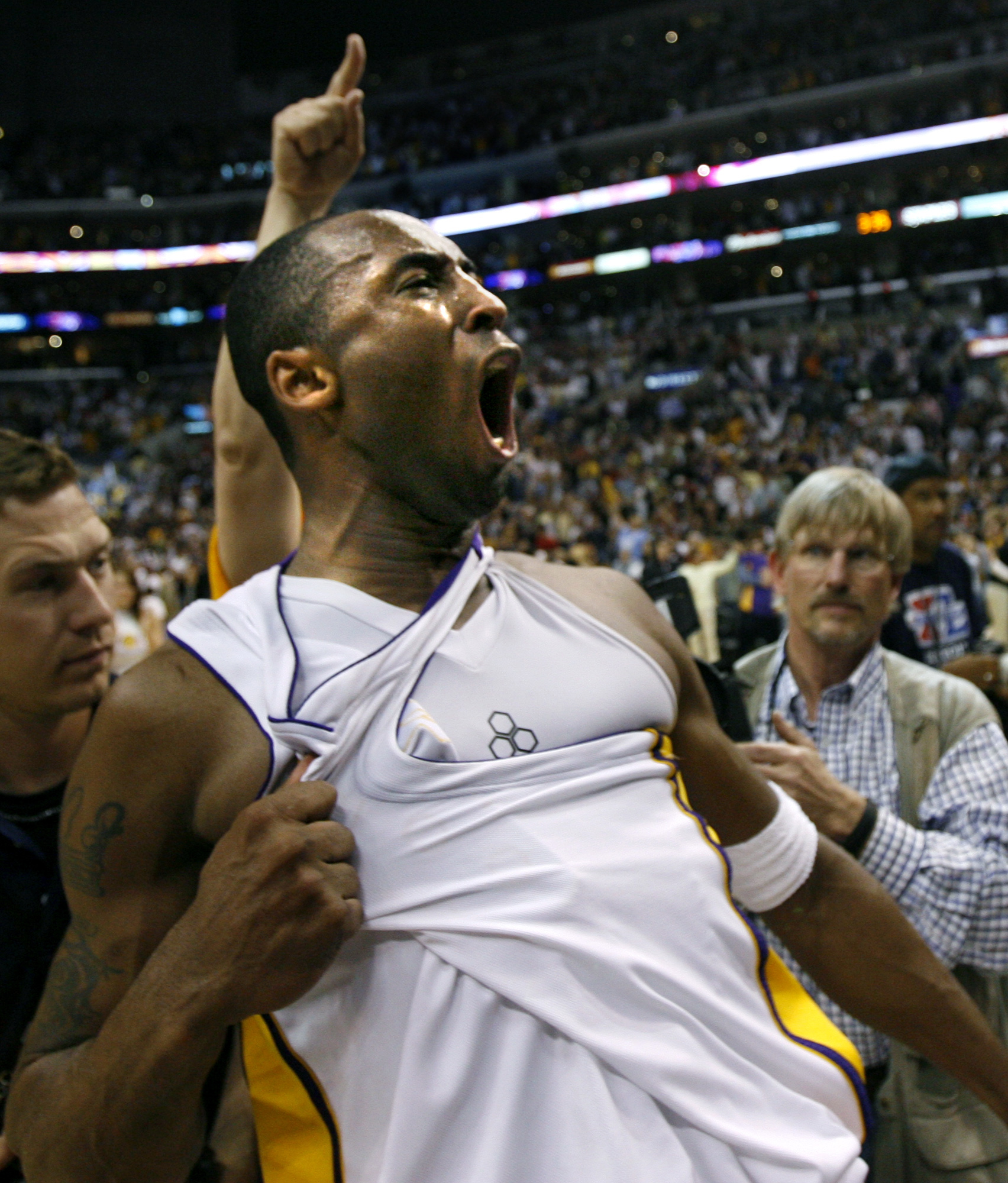 Kobe Bryant of the Los Angeles Lakers celebrates after beating the buzzer for his team in Game 4 of the NBA Western Conference First-Round playoffs against the Phoenix Suns at Stapels Center in Los Angeles, California, U.S., April 30, 2006. /CFP

He was always eager to outdo others and was stubbornly convinced that he could do it.

That's why 23-year-old Kobe dared to challenge 28-year-old Shaquille O'Neal, the most dominant big man in basketball history, for team leadership, right after they won the first ring together.

Of course, Kobe's determination was built on probably the hardest work that anyone could handle. He made 1,500 to 2,000 jumpers in practice every day during the summer of 2000. He won his fourth title in 2009 and then went to Hakeem Olajuwon, trying to improve his post-up skills. 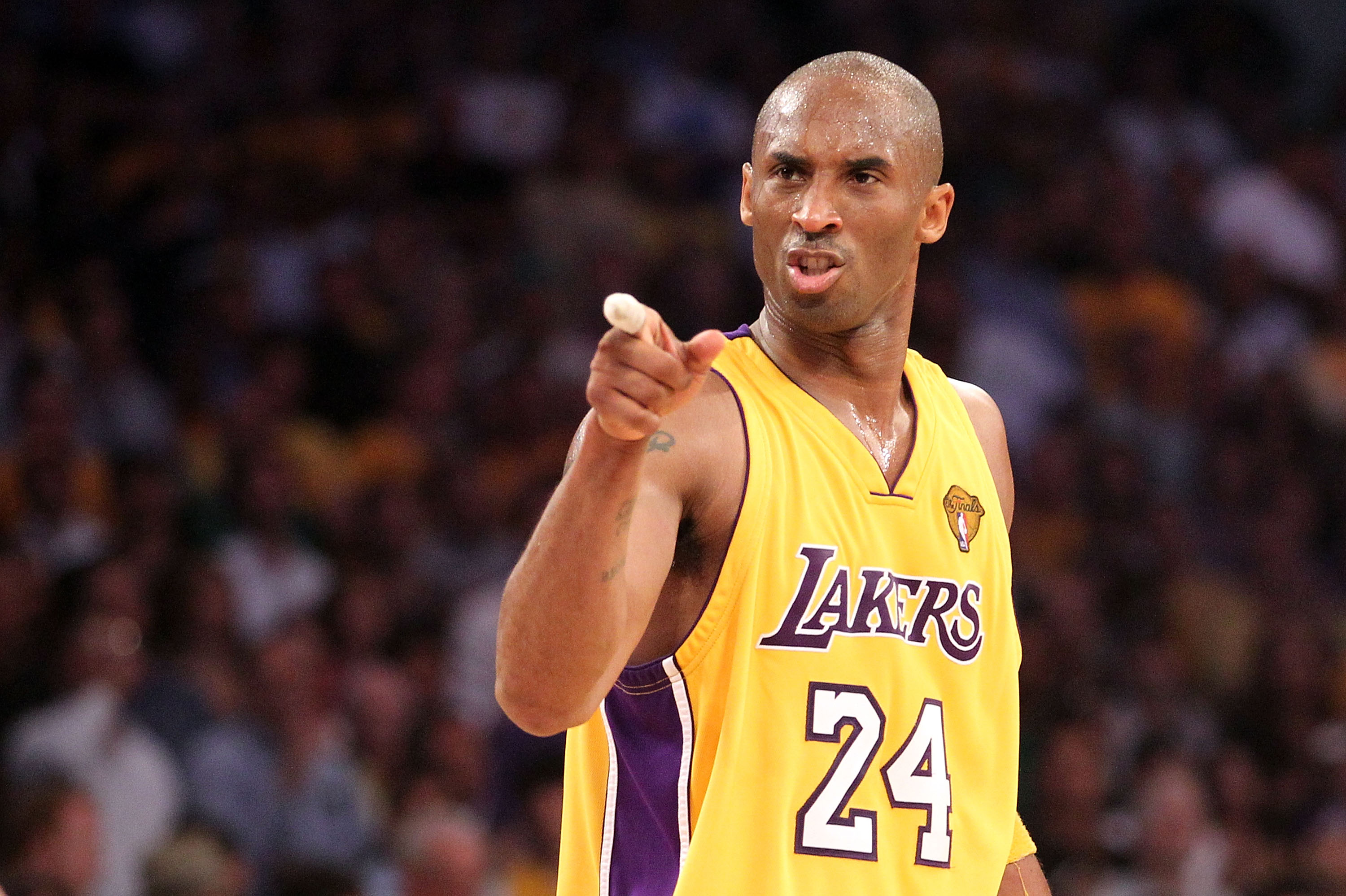 Kobe Bryant of the Los Angeles Lakers looks on in Game 7 of the NBA Finals against the Boston Celtics at Staples Center, June 17, 2010. /CFP

That's why Kobe was able to score 62 points within three quarters and 81 points in one game. He only had seven healthy fingers to use in the 2009-10 season, in which he beat the buzzer for the Lakers six times.

"I do know that he would thank everyone that helped him get here, including the people that doubted him and the people that worked against him and told him that he couldn't attain his goals. He would thank all of them for motivating him to be here. After all, he proved you wrong," said Vanessa. 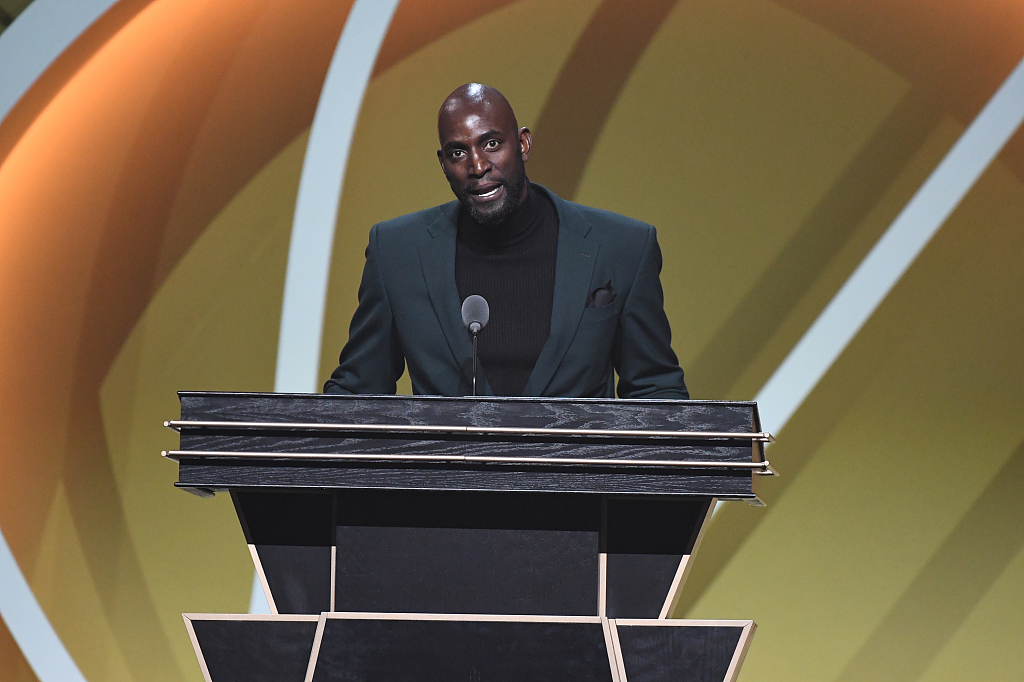 Before Vanessa delivered her speech, Garnett was the first one to talk of the 2020 Class. "I told them I wanted to go first, because I know we've got the OGs in here. I know y'all have got a bedtime in a minute. I wanted Bill Russell to hear my speech before y'all fell asleep."

Though KG only stayed at TD Garden for six seasons, he's the unquestionable leader of the team and he's the one who brought the 17th NBA Championship to them. He is a true Celtic. 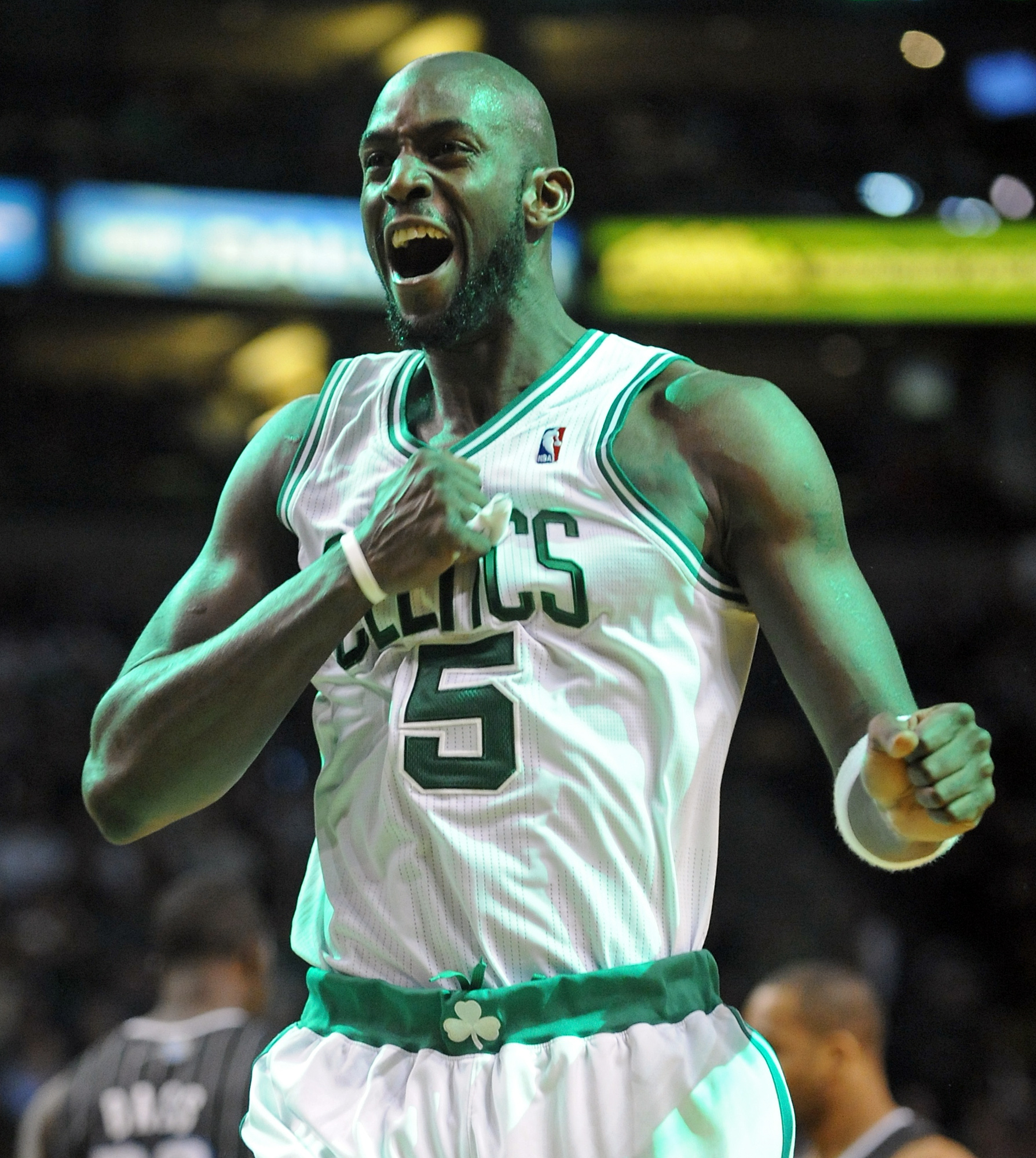 Kevin Garnett of the Boston Celtics warms up [prior to the game against the Orlando Magic at TD Garden in Boston, Massachusetts, U.S., January 17, 2011. /CFP

No one could or should question Garnett's passion for basketball. "We were running sprints after practice. He outran every guard, outran every small forward and every big guy. He wanted to win at everything that he did. Every drill, he wanted to win. And it was the first day," said Garnett's former teammate Sam Mitchell.

Sure, Garnett's successful career was built on his unique talents as a revolutionary big man defender, but talents alone could not support him to cover a huge area from baseline to the 3-point line on defense. It took extraordinarily strong will to make a guy switch seamlessly among rim protector, rebounder and help defender for 21 seasons. 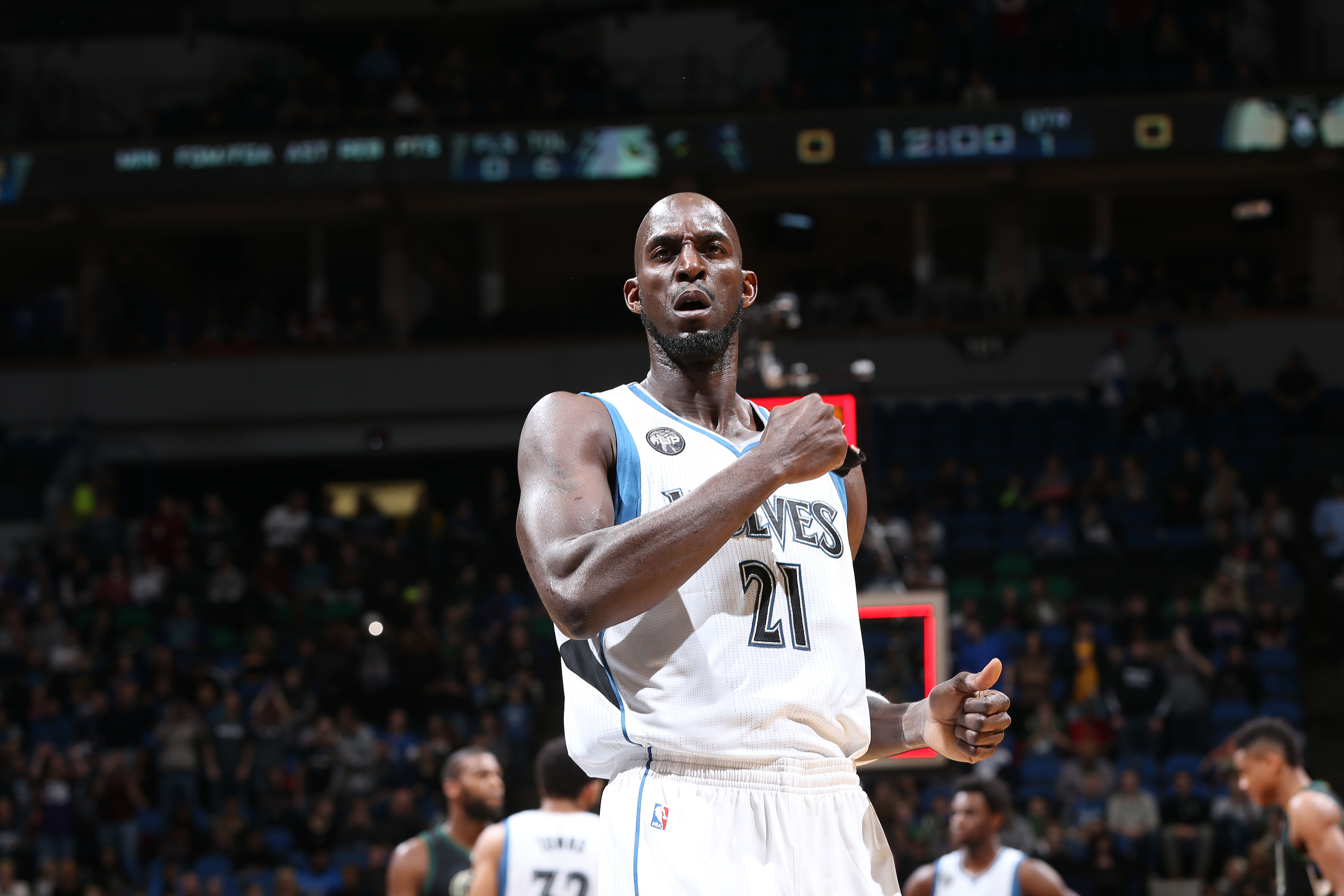 Kevin Garnett of the Minnesota Timberwolves looks on in the game against the Milwaukee Bucks at Target Center in Minneapolis, Minnesota, U.S., January 2, 2016. /CFP

Of course, KG sometimes used that will for something else. For example, in Game 3 of the Eastern Conference Finals against the Miami Heat, he was fouled by Udonis Haslem and fell onto the ground in the second quarter. The whole TD Garden fell into silence, worrying that Garnett might get injured.

Then the 36-year-old did two knuckle push-ups before standing up. "That's old school. My uncle taught me to do pushups on my knuckles. That's some Army-Navy stuff," said the guy who scored 24 points and 11 rebounds to help the Celtics win 101-91.

Garnett is a grateful man who thanked the four players that jumped into the NBA from high school before he did. "It's a big deal for me to pay homage to the ones that came before me."

At the end of his speech, Garnett thanked Duncan for taking him "to another level." 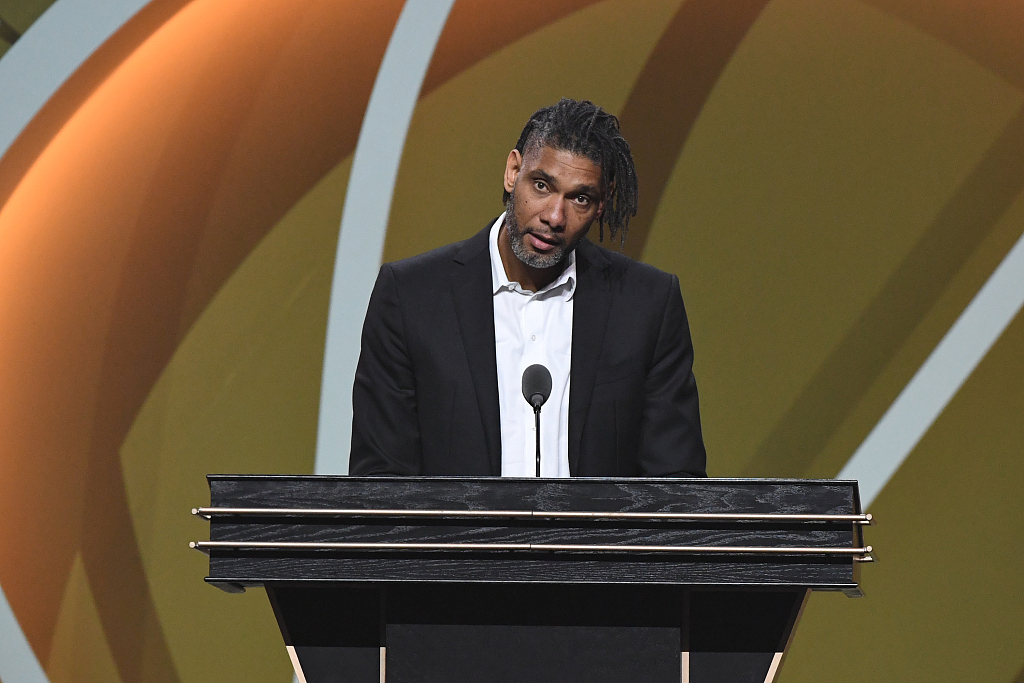 When Duncan, the greatest power forward in NBA history, came forward, he was accompanied by Hall of Famer David Robinson and San Antonio Spurs head coach Gregg Popovich. 24 years ago, Duncan started his NBA career with these two.

It's hard to tell if Duncan was serious about his strange remarks because this is the guy who had the following conversation with Randolph Childress in Wake Forest University in 1995:

"Where are you from?" Duncan asked.

"It's the nation's capital, for crissakes. It's where the president lives." 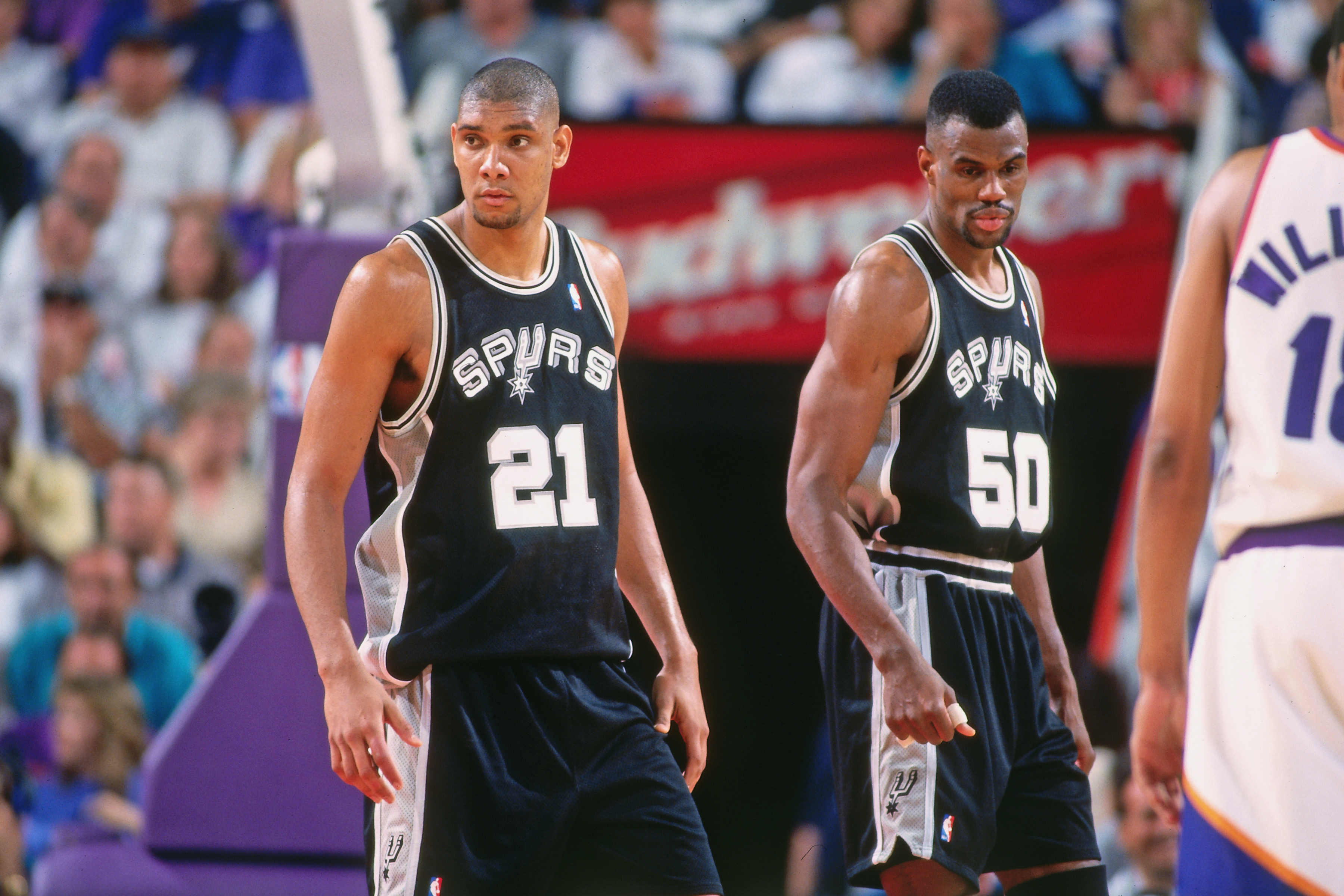 Before Duncan joined the Spurs, Robinson was already the greatest player in their franchise history. During the photo session, the photographer wanted Duncan and Robinson to talk about something and that conversation became an impromptu physics seminar.

"I don't remember one thing we sat down and talked about specifically," said Duncan. "But what he did was he was a consummate pro, he was an incredible father, he was an incredible person, and he showed me how to be a good teammate, a great person to the community, all those things. Not by sitting there and telling me how to do it, but by being that."

There's one thing Duncan said on that day to Robinson was: "So how does this relate to Shaq coming down the lane?"

In the first decade of Duncan's career, he and O'Neal claimed eight of the 10 NBA Championships between 1997 and 2007, four for each. 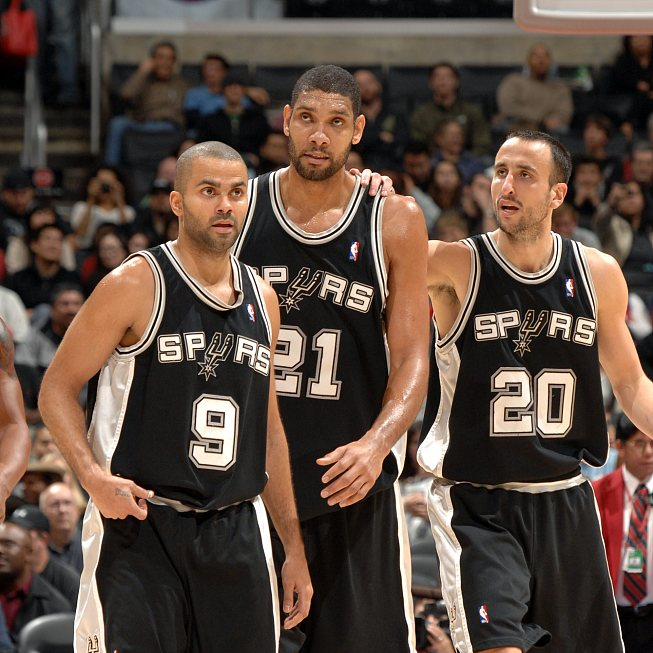 Tim Duncan (#21), Tony Parker (#9) and Manu Ginobili of the San Antonio Spurs look on in the game against the Los Angeles Clipeers at Staples Center, December 13, 2009. /CFP

Duncan also expressed his gratitude toward Dave Odom, the coach that brought him to Wake Forest, and Tony Parker and Manu Ginobili, who won four tittles with Duncan in the Spurs.

"I have no idea how I played, but I played well enough that he offered me a scholarship. He saw something in me, and he took a chance on this kid from the [U.S. Virgin] Islands. Thank you, Coach O, thank you for seeing something in me that I didn't see at the time," said Duncan.

"To look to your left and look to your right and have the same guys there year in and year out is unbelievable. It's a blessing beyond what I can put into words. Manu Ginobili, Tony Parker, I can't wait to see you guys up here and for me to not be up here. It was an honor sharing the court with you guys. Thank you for your friendship, thank you for your brotherhood, thank you for all of the experiences that we shared on that court." 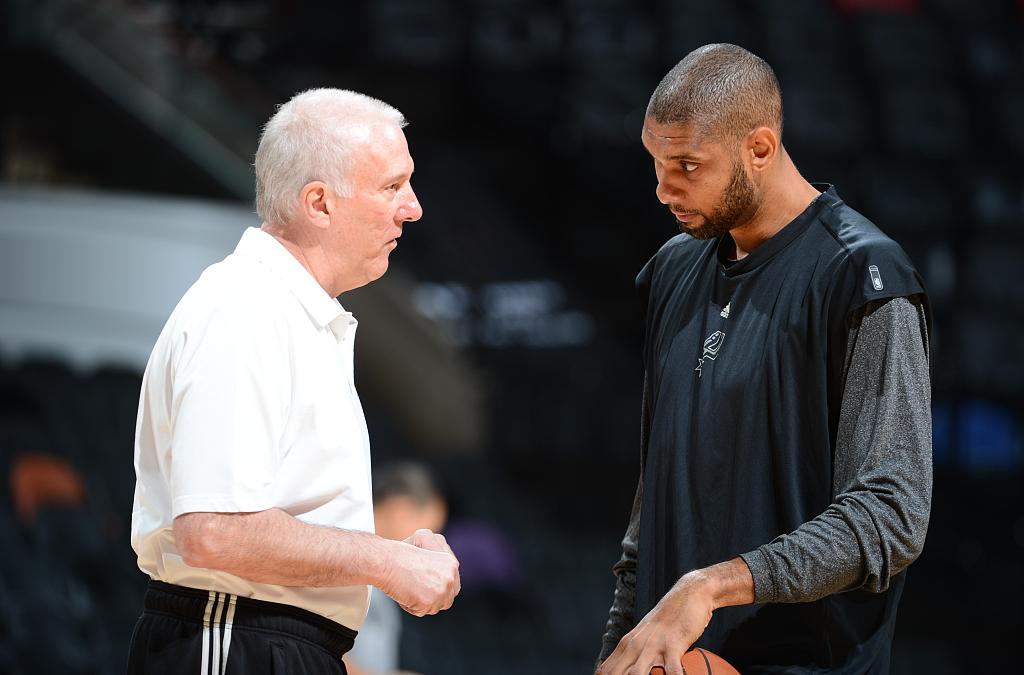 Tim Duncan (R) of the San Antonio Spurs talks to his head coach Gregg Popovich before Game 4 of the NBA Finals against the Miami Heat at AT&T Center in San Antonio, Texas, U.S., June 12, 2013. /CFP

Duncan's parents, Ione and William, who passed away in 1990 and 2002, taught him "zero basketball knowledge," "but they taught me about the game more than anyone else," Duncan said. "You heard the mantra that my mom instilled in me – good, better, best, never let it rest until your good is better and your better is your best – they told me, and made me, have pride in everything I did."

Before he passed away, Duncan's father said to Popovich: "I'm going to hold you responsible to make sure that when he's done, he's the same person that he is now." Five years ago at the retiring ceremony of Duncan's No. 21 Spurs jersey, Popovich said: "That man right there is exactly the same person now as he was when he walked in the door."

Duncan won his first ring at 23 and the last one 38. The Big Fundamental has been solid for all 19 years.