Deandre Ayton (#22) of the Phoenix Suns dunks in Game 2 of the NBA Western Conference Finals against the Los Angeles Clippers at Phoenix Suns Arena in Phoenix, Arizona, U.S., June 22, 2021. /CFP

The Phoenix Suns claimed their second straight win at home 104-103 over the Los Angeles Clippers in Game 2 of the Western Conference Finals on Tuesday, leading 2-0 in the series.

Before the Suns' last possession, their head coach Monty Williams told Ayton: "DA, if he throws it, you gotta try to dunk it. Okay?"

There was 0.9 seconds left and the Suns were trailing 103-102. Jae Crowder was about to make the throw in from the baseline. In front him stood 2.11-meter-tall DeMarcus Cousins trying to challenge his passing. The Suns' first option of taking the last shot should be Devin Booker but he was not in the best form 5-16 on the field, not to mention committing seven turnovers as well. 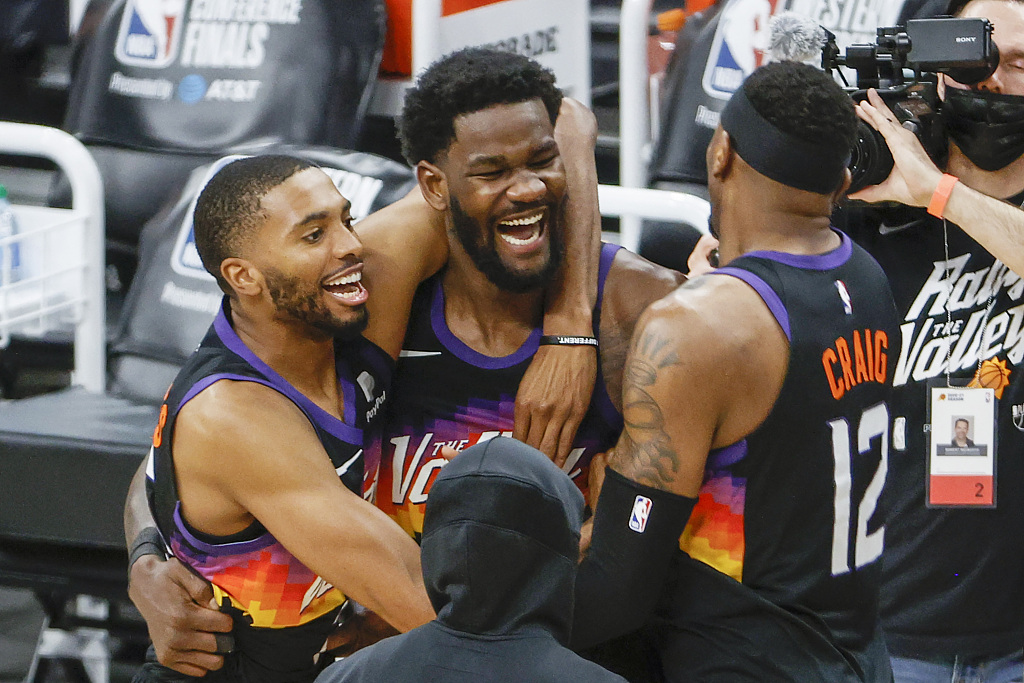 Deandre Ayton (#22) of the Phoenix Suns celebrates with his teammates after 104-103 win over the Los Angeles Clippers in Game 2 of the NBA Western Conference Finals at Phoenix Suns Arena, June 22, 2021. /CFP

Crowder threw the ball really high above the rim while Booker set a screen for Ayton in off-ball movement so Ayton left 2.16-meter-tall Ivica Zubac a bit left, but good enough for him to leap high and slam the ball into the rim hard.

That goal put the Suns back on top 104-103 and 0.7 seconds left on the clock for the Clippers. Unfortunately, with no timeouts left, there was not much the Clippers could do.

"I've never played so hard from the jump ball to the end. A hundred and fifty percent. Usually, it's like 110, but this is 150 percent. And it's 150 percent mentally, too. Just the level of focus and the things you really have to pay attention to. It's really intense, man," said Ayton after the game. 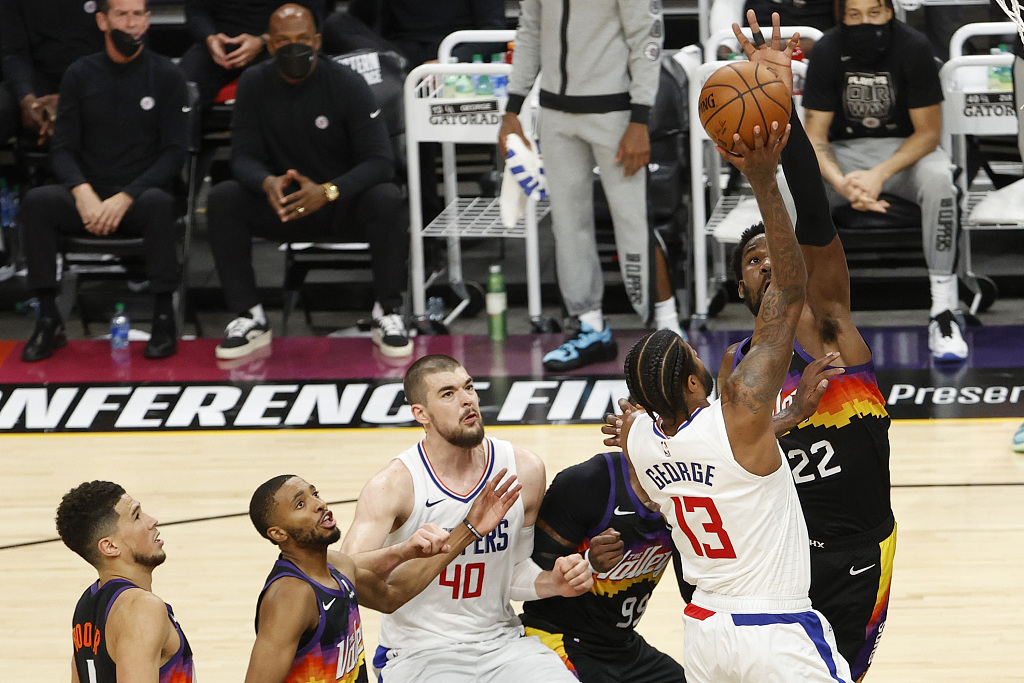 Deandre Ayton (#22) of the Phoenix Suns denies a shot by Paul George (#13) of the Los Angeles Clippers in Game 2 of the NBA Western Conference Finals at Phoenix Suns Arena, June 22, 2021. /CFP

The 22-year-old Bahamian center from the University of Arizona reached the Conference Finals in his first playoff trip three years in to the league. He and his team beat the defending champions Los Angeles Lakers in the first round, swept the regular season MVP Nikola Jokic and the Denver Nuggets in the second round, and are now leading 2-0 over the Clippers in the Western Finals, without their franchise orchestrator Chris Paul.

Before the game-winning alley-oop, Ayton was already 12-14 in field goals to drop 22 points and 14 rebounds. His size, athleticism and finishing ability gave the Clippers quite some trouble in the paint. On the other side of the court, Ayton's defensive existence under the rim forced the Clippers to continuously test their touch and luck from beyond.

The Suns led 60-30 in points in the paint in Tuesday's game. The Clippers went 13-34 from the arc, which was not pretty either. 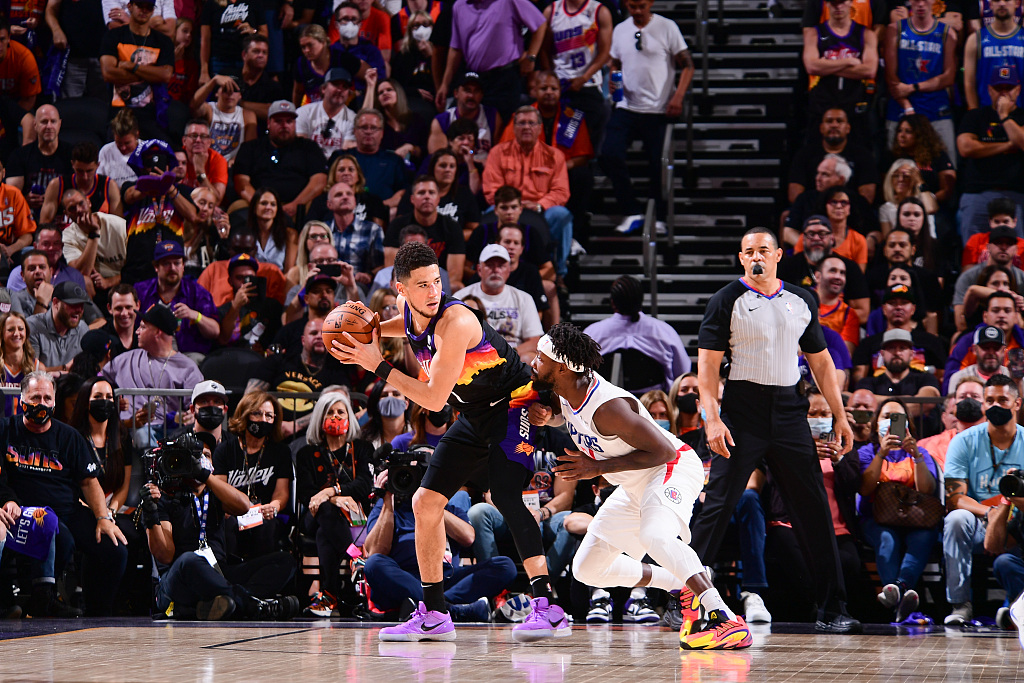 However, this was still a close game partly because of the Clippers' defense on Booker, both orthodox and unorthodox. Instead of double-teaming him from the beginning, the Clippers had Patrick Beverley glued to him in almost every minute when they were on the court. Beverley even broke Booker's nose with his head in the third quarter. Beverley was unlikely to do that on purpose but things like that happened a little too much in his game.

Moreover, his flopping that drew an offensive foul by Booker in the fourth quarter was definitely intentional.

The credit of slowing Booker down did not go to Beverley alone. Zubac, despite his size, repeatedly stepped up for hedge and recover defending Booker's screen play, leaving Booker no space to shoot comfortably in the middle range. He and Beverley challenged Booker's ability of dealing with the ball hard. Though Booker still made four jumpers in the middle range, his rhythm in the game was disrupted. So was his choice of timing when passing. 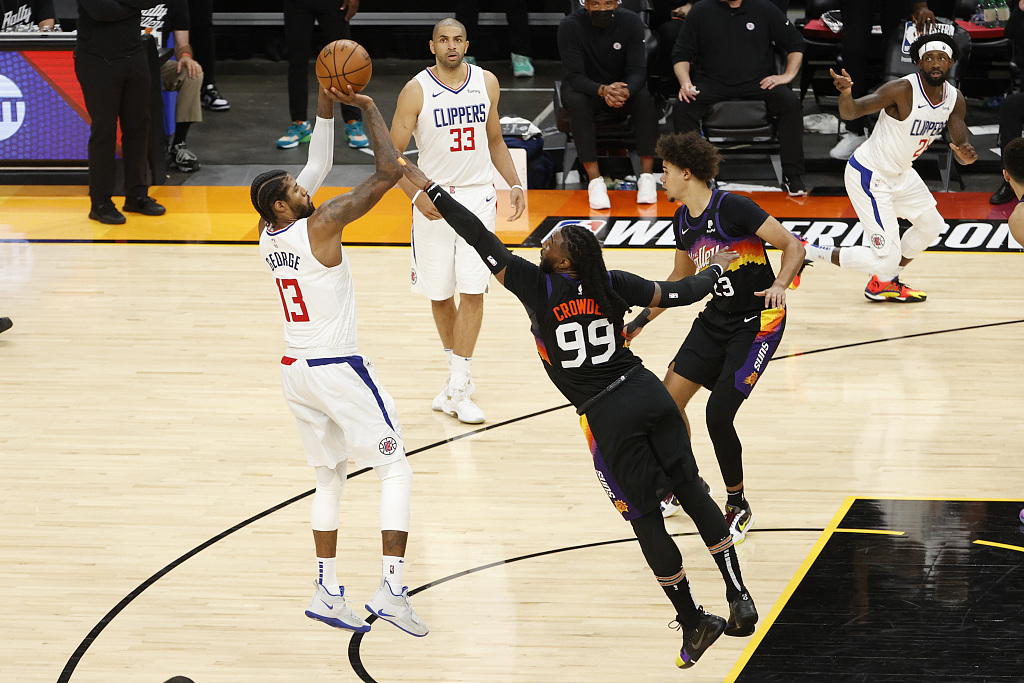 Paul George (#13) of the Los Angeles Clippers shoots in Game 2 of the NBA Western Conference Finals against the Phoenix Suns at Phoenix Suns Arena, June 22, 2021. /CFP

On the Clippers' side, Paul George came so close to playing hero. Though he was 1-8 from downtown and made his only triple in the last quarter, George scored nine points in two minutes in late Q4, putting the Clippers on top 103-102 with a jumper when there were only 22 seconds left.

One second later, George drew a foul and earned two free throws. Had he made two, the Clippers would have been sitting at a safe 3-point lead; if he had made one, the Clippers could've at least forced the Suns to shoot desperate 3-pointers, which would've been easily predictable for defenders.

But George missed both free throws, leaving the Suns one last breath for Ayton to finish that tide-turning alley-oop. 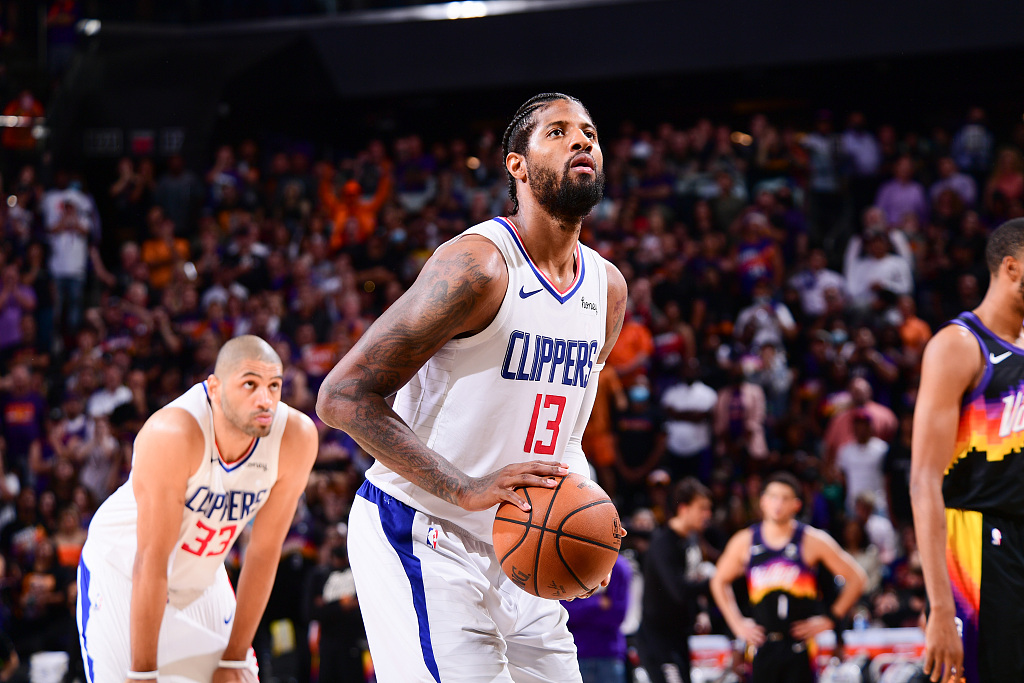 Paul George (#13) of the Los Angeles Clippers is about to shoot a free throw in Game 2 of the NBA Western Conference Finals against the Phoenix Suns at Phoenix Suns Arena, June 22, 2021. /CFP

George shot at 86.8 percent in the regular season and 85.7 percent in the playoffs on the free throw line. But he was 5-10 from there in Tuesday's game. It's safe to say that the five free throws he missed partly cost his team the game.

Coach Tyronn Lue had some thoughts after Game 1. He started big on Tuesday and gave Zubac 24 minutes on the floor. Zubac contributed a double-double of 14 points and 11 rebounds while shouldering heavy defensive duty of covering Ayton and hedging Booker. Lue tried to have DeMarcus Cousins work on Dario Saric as a defensive weakness in the second quarter, but it did not work. Cousins was basically abandoned in the second half. Nonetheless, even the not-so-athletic Saric punished the Clippers from inside when he was the only big man on the court.

Lue's team again trailed 2-0. What will he do differently in Game 3 at Staples Center on Thursday?