TOKYO — Milos Raonic picked up another injury Thursday and was forced to retire from his second-round match at the Japan Open.
The 2016 Wimbledon finalist lost the opening game against Yuichi Sugita and then decided to stop while trailing 1-0 because of a right-calf injury. He failed to appear at a scheduled news conference but later issued a statement via the ATP.
“I picked up a strain to the calf. It’s hard to know the extent of it, I’ll have to wait because it’s too soon to have an exact evaluation,” Raonic said. “It happened when the score was deuce. I felt a sharp pain at the back of my leg. I will head home now and get medical attention.
“It’s been a difficult and frustrating year. I obviously wish I could have focused on tennis more rather than chasing help all the time.”
After winning his first match back from a seven-week absence following surgery on his left wrist, Raonic complained that the tennis tour was too demanding and called for a review.

Milos Raonic receives medical attention at the Japan Open on Oct. 5. Matt Roberts / Getty Images
The Canadian had withdrawn from five events this year, and conceded walkovers at two others.
Sugita also won his opening match when his opponent retired. He will next face Adrian Mannarino in Friday’s quarterfinals.
David Goffin, last year’s runner-up, rallied to beat Matthew Ebden 2-6, 7-5, 7-6 （1）。 The Belgian led 5-2 in the third set, but Ebden broke twice to force the tiebreaker.
“He was really solid on the baseline, didn’t miss a lot,” Goffin said. “It wasn’t easy to make any winners because of the temperature and the balls. The temperature was cooler this evening so the balls were really hard. It was tough to hit a winner — the ball was not really going fast and that’s why there were a lot of rallies, not a lot of mistakes.”
Goffin, who has been a key player in Belgium’s run to the Davis Cup final against France, will next face French player Richard Gasquet.
Steve Johnson and Diego Schwartzman also advanced to the quarterfinals. 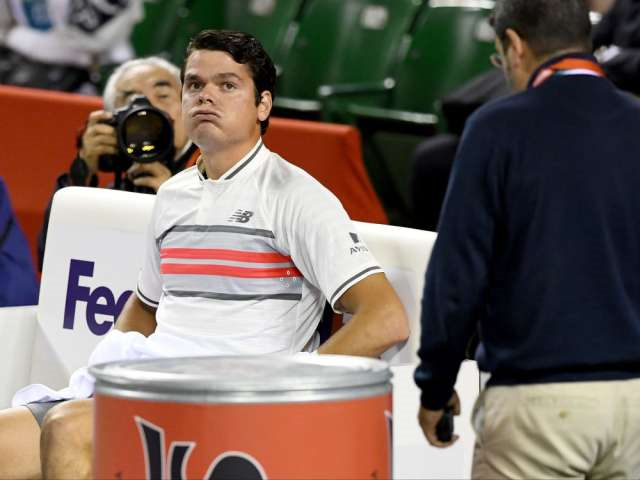 Milos Raonic reacts on the sideline during his short-lived match against Yuichi Sugita at the Japan Open on Oct. 5. Toru Yamanaka / AFP / Getty Images