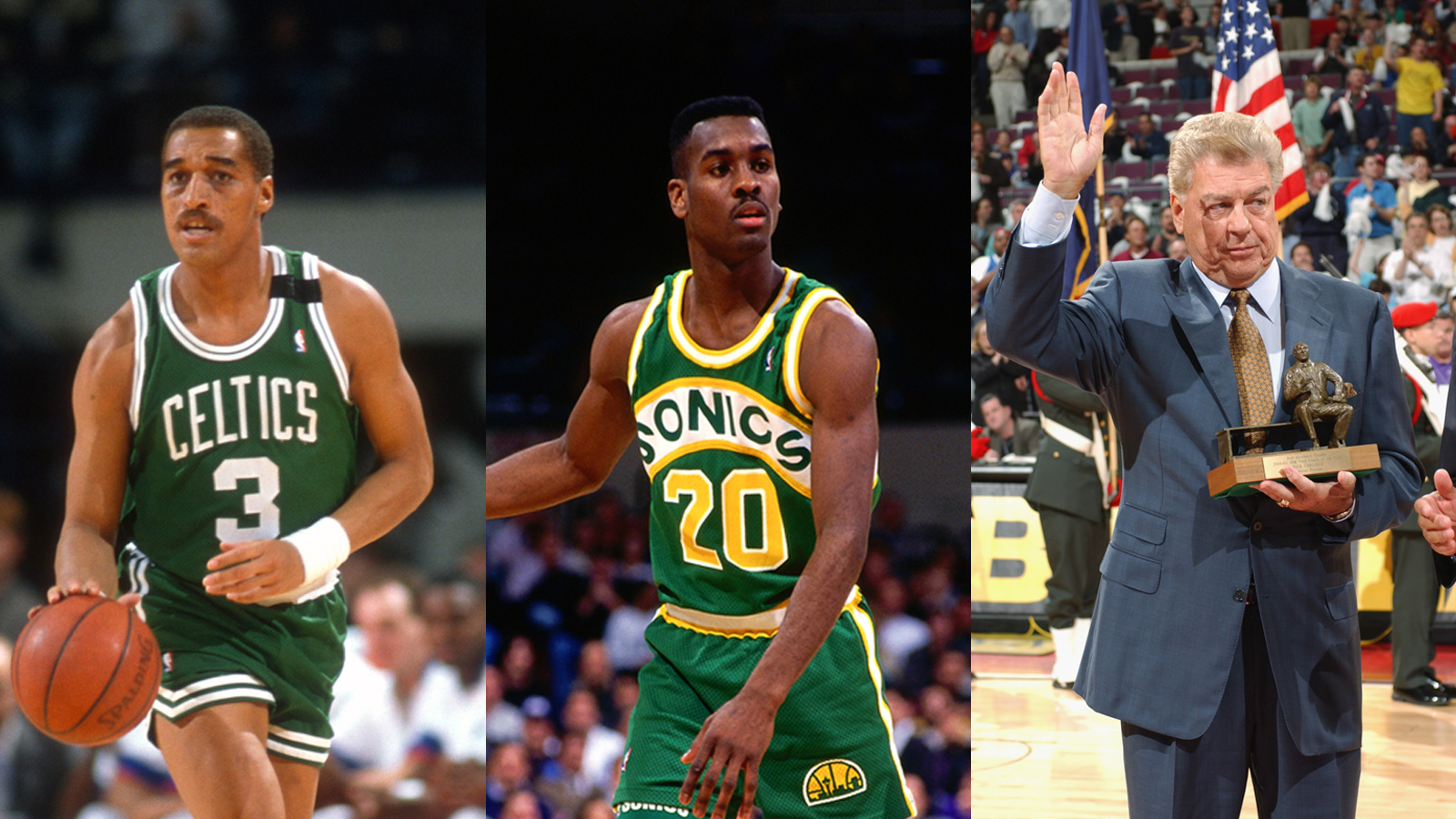 From L to R: Dennis Johnson of the Bosto Celtics, Gary Payton of the Seattle SuperSonics and Chuck Daly of the Detroit Pistons. /VCG

In our last story "They try to stop Michael Jordan, but fail – individuals," we reached the conclusion that no one was ever able to take care of Michael Jordan by himself. Having realized this, several coaches decided to ask the whole team, instead of players on their own to do the job. 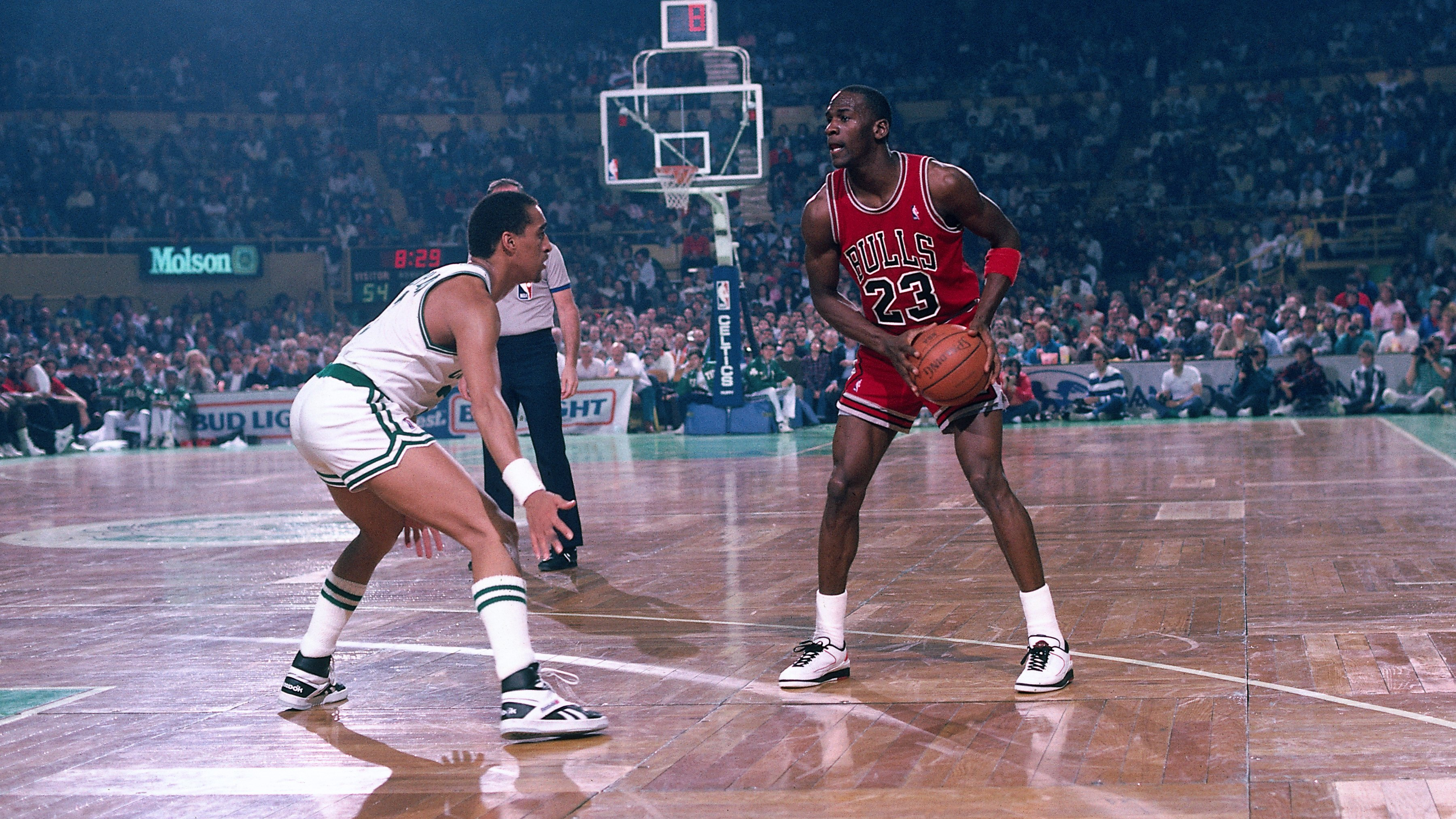 Dennis Johnson (L) of the Boston Celtics defends Michael Jordan of the Chicago Bulls in the game at the Boston Garden in Boston, Massachusetts, 1987. /VCG

Having missed most of the game in the 1985-86 regular season because of injury, Jordan came back in time for the playoffs and the opponents were the Boston Celtics. The team had four of the 50 Greatest Players in NBA History – Larry Bird, Kevin McHale, Bill Walton, Robert Parish – and eight-time NBA All-Defensive Team select, Dennis Johnson.

On April 17, 1986, Jordan and the Chicago Bulls came to the Boston Garden to challenge the future champion team of the season. They lost 123-104, but Jordan put down 49 points in 43 minutes. "I just sat there and said, 'Wow!'" said Celtics' head coach K.C. Jones who had been teammates of Bill Russell and fight Jerry West, Elgin Baylor, Wilt Chamberlain when he was a player.

Johnson was said to be looking at box score silently for quite a while in the locker room before he said: "He's not going to do that again." 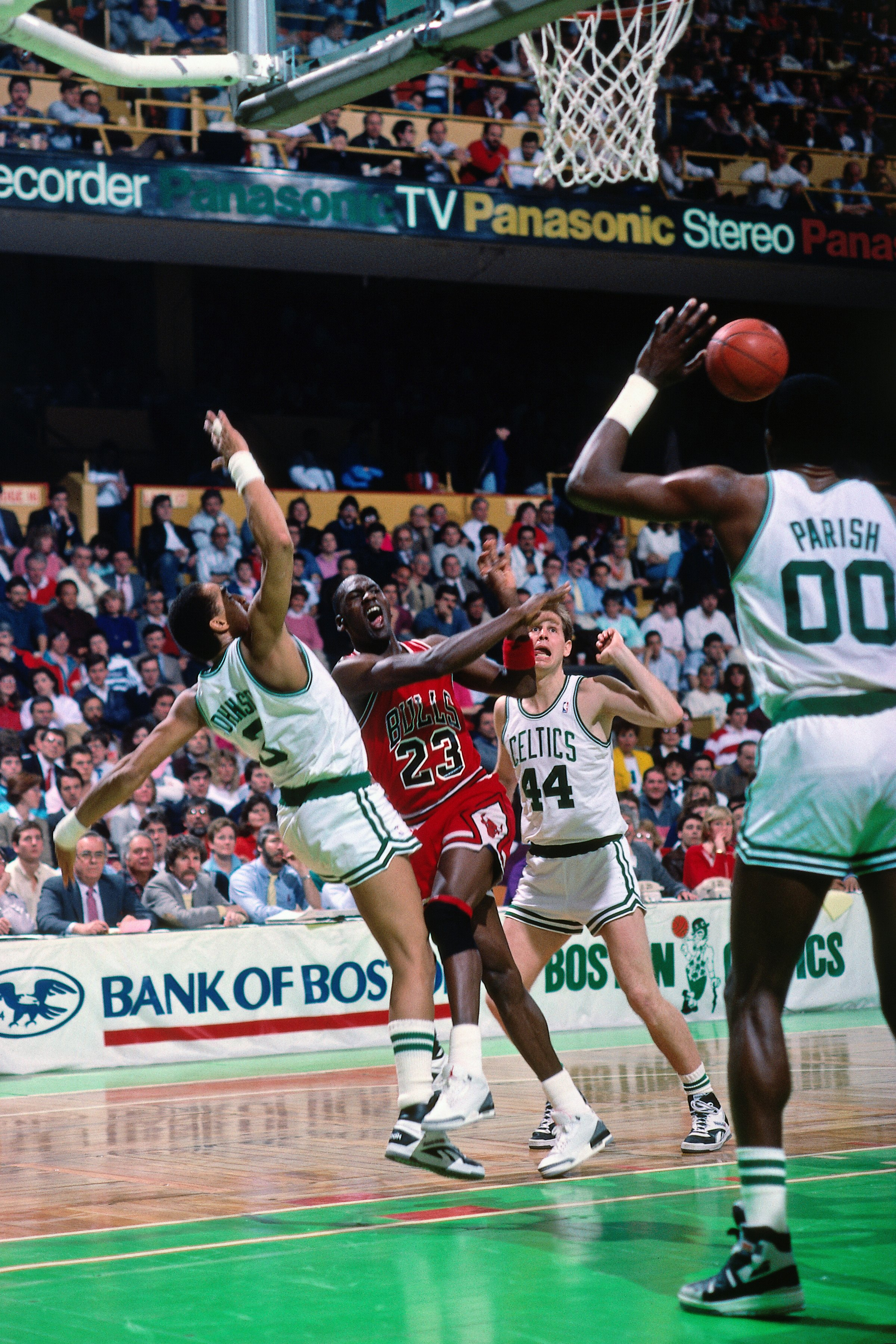 Michael Jordan #23 of the Chicago Bulls passes the ball in the game against the Boston Celtics at the Boston Garden, 1988. /VCG

Poor Dennis would have taken that back if he knew what happened three days later. In Game 2, the Bulls lost again 135-131 after two overtimes. Having played 53 minutes, Jordan scored 63 points, the highest in NBA playoff history. If there were any word that could describe his performance, it must be the following comments by Bird: "I think he's God disguised as Michael Jordan."

The Celtics defeated the Bulls again in Game 3 to knock Jordan out. The team, especially Johnson, learnt his lesson in defending Jordan.

One year later, the two teams met again in the playoffs. This time, Boston again were the winner of the 3-0 series. The difference was that Jordan's score dropped to 35.7 points per game and his field goal rate was only 41.7 percent. 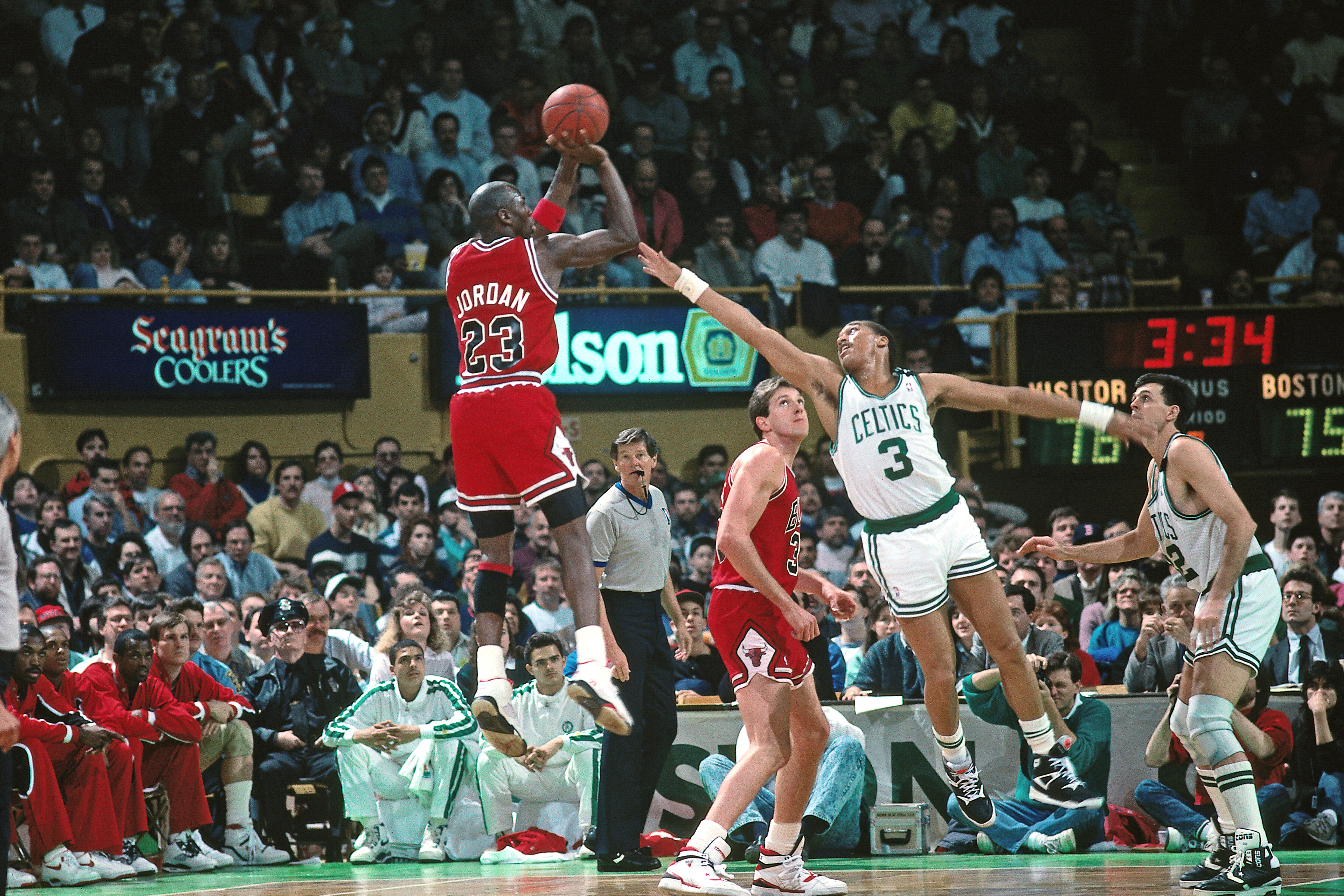 How did Boston do it?

1.93-meter-tall Johnson had never been known for outstanding athleticism. What he had was bravery, patience, carefulness, and smartness. He knew how to keep Jordan from going to his comfort zone, remained concentrated even if Jordan made shots in front of him, and most importantly, he knew how to guide Jordan into Boston's defensive trap made by Bird, Parish, and McHale.

Before Jordan developed his signature jumper in 1989, it was helpful to surround him with more limbs in the paint. What Johnson and the Celtics did became a prototype of the Detroit Piston's defense on Jordan. 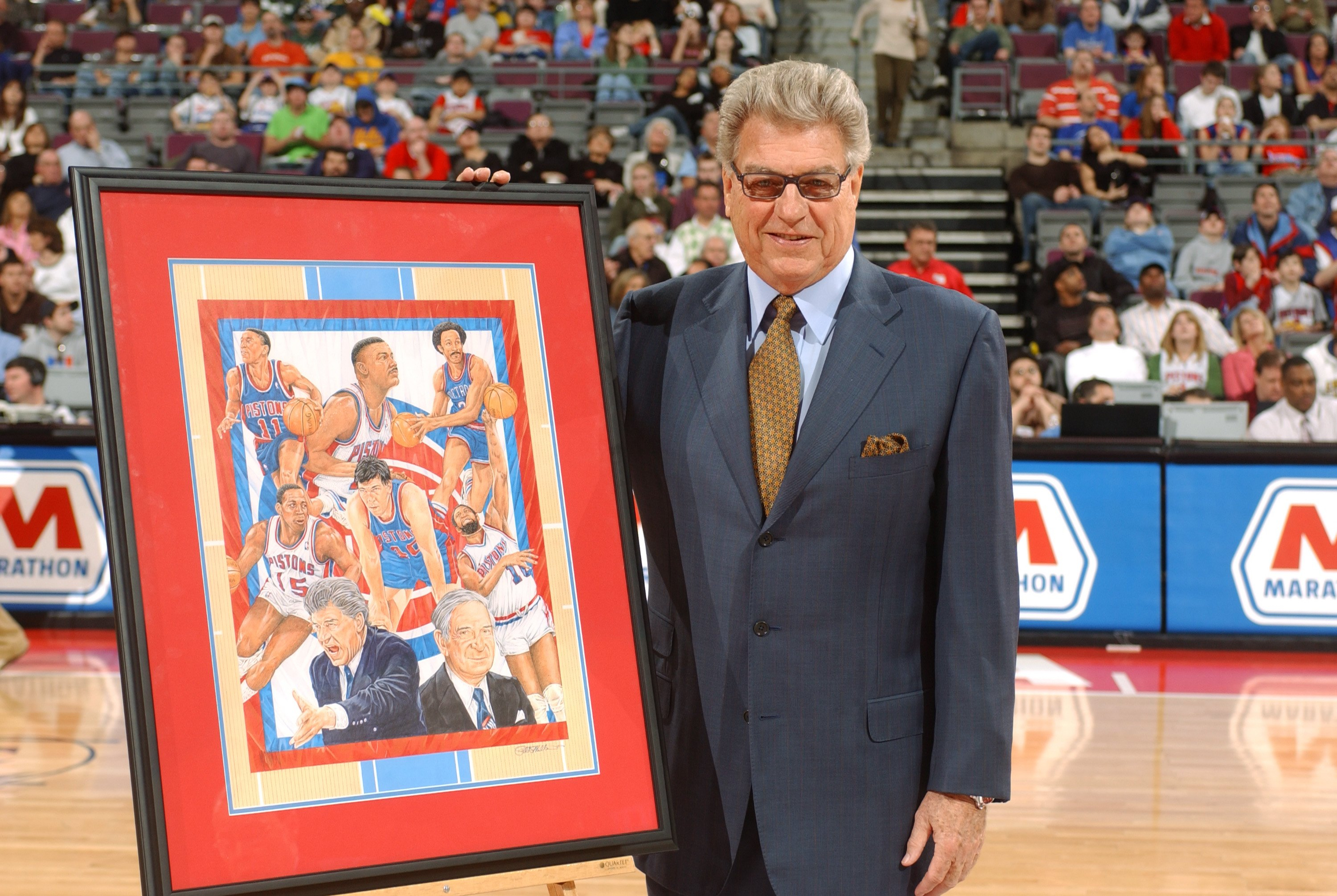 Chuck Daly, former head coach of the Detroit Pistons is honored in the game against the Charlotte Bobcats at the Palace of Auburn Hills in Auburn Hills, Michigan, March 12, 2006. /VCG

The Jordan Rules: Chuck Daly and the Detroit Pistons

On April 3, Jordan claimed 59 points to help the Bulls beat the Detroit Pistons and this was not the first time for him to humiliate the Pistons. Before this game, the Bulls' No. 23 would always sting the Pistons every time they met. 49, 47, 51, 49, Jordan could score an average of 36 points in the 19 games against the Pistons.

"We can't let Jordan beat us again by himself" was on every Pistons' player's mind, and of course, on their head coach, Chuck Daly's mind.

Hence there came "The Jordan Rules." Thanks to Daly's ridiculously meticulous work, it was said to include over 100 terms. To make it less boring and more concise, The Jordan Rules required players to do the following work: 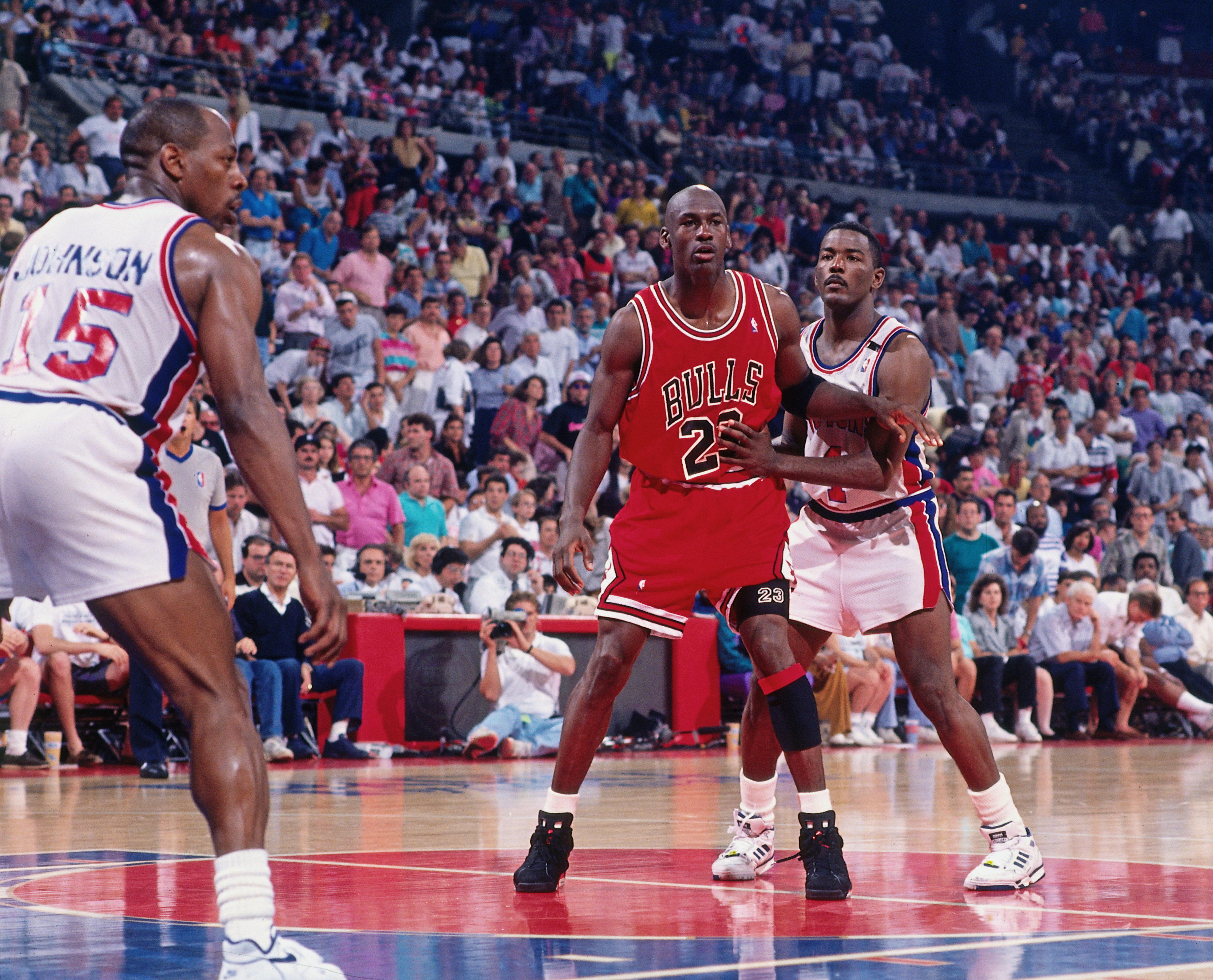 Michael Jordan #23 of the Chicago Bulls tussles with Joe Dumars of the Detroit Pistons in the game at the Palace of Auburn Hills, 1990. /VCG

When Jordan had the ball and faced a defender one-on-one, make him drive from the left because he's more dangerous when he goes right.

When Jordan called for the screen, double team him immediately with a big man who is usually 2.11-meter-tall John Salley or Bill Laimbeer. Use your height to limit Jordan's passing and remember, keep it physical.

When Jordan posted up, triple-team him – Joe Dumars behind, Isiah Thomas in front and another big guy on the baseline.

When Jordan tried to dodge defense via an off-ball screen, Dumars must follow him closely while Laimbeer stepped up to keep him away from the rim.

When Jordan received the ball in the two wings, Dumars and Thomas must double team him. 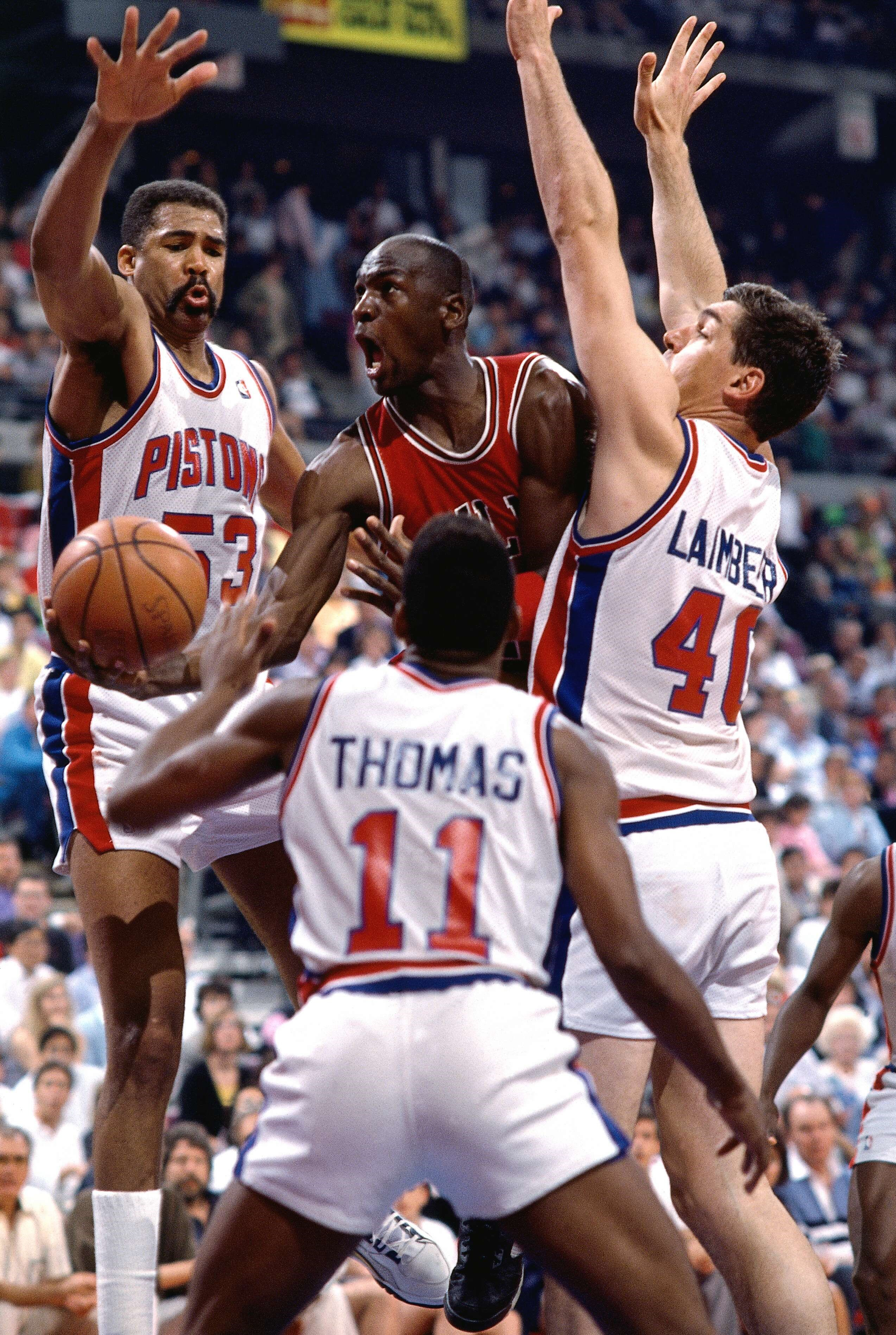 Michael Jordan (C) of the Chicago Bulls tries to shoot the ball under the defense of three players in the game against the Detroit Pistons at the The Palace of Auburn Hills, 1989. /VCG

Shortly speaking, Detroit were forcing Jordan's teammates to stand out and defeat them. Unfortunately, they could not do it until 1991, when Scottie Pippen grew to be who he was.

Having been known as "The Bad Boys," the Pistons became Jordan's biggest enemies not just because of their physical games. They were consistent, accurate, just like an operating machine in stopping Jordan from making play. Meanwhile, their slow, ugly but lethal playstyle intimidated Jordan's teammates and the rest of the league. No team ever felt comfortable playing against the Pistons and that's how they won.

Thanks to the Jordan Rules, he averaged only 28 points in the following 17 games against the same team. By contrast, the Pistons won 14 of the 17 games and kept knocking Jordan and he Bulls out in the playoffs in 1988, 1989 and 1990. 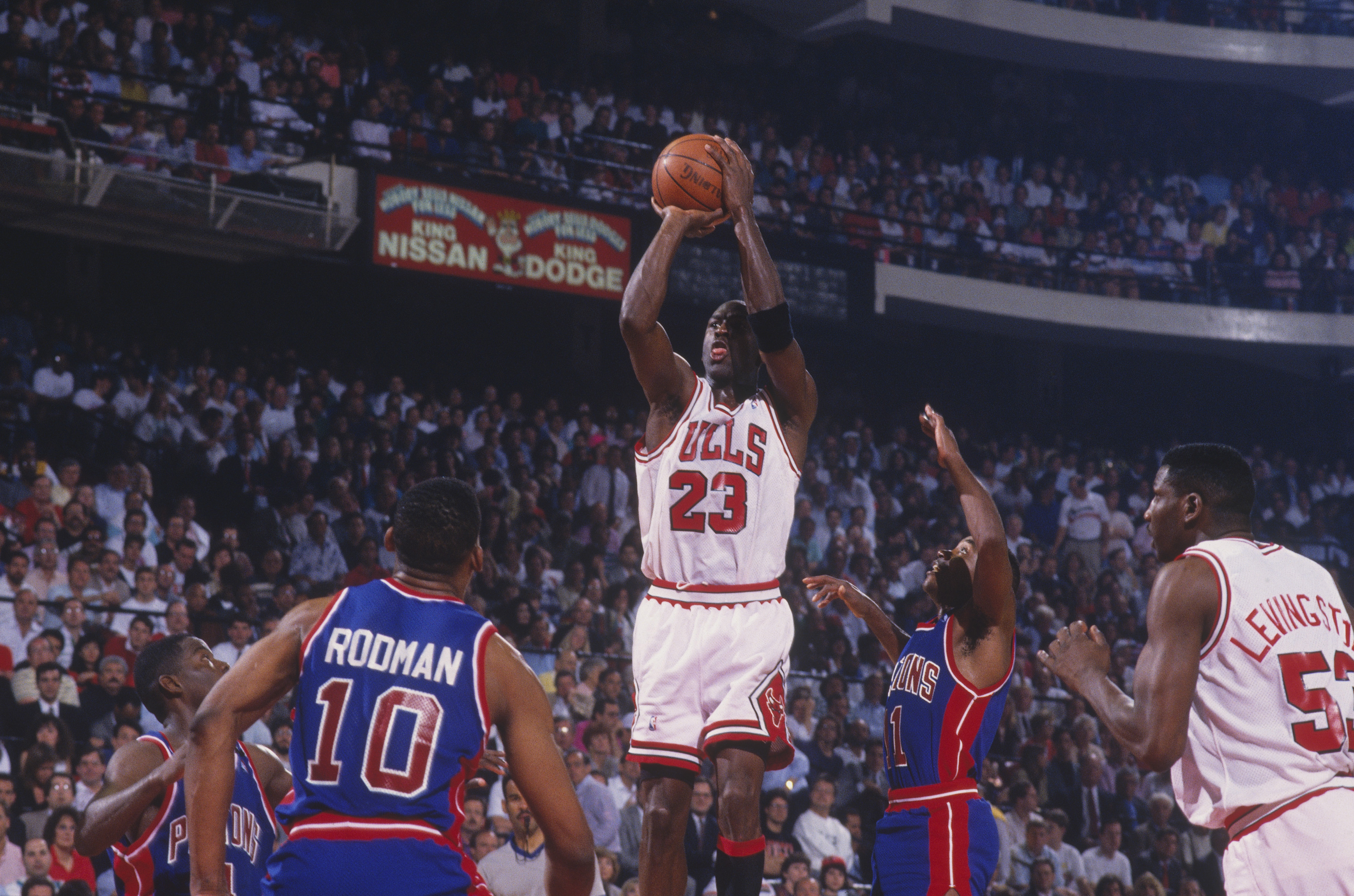 Michael Jordan #23 of the Chicago Bulls shoots the ball in the game against the Detroit Pistons at the Chicago Stadium in Chicago, Illinois 1991. /VCG

"Michael, your time is coming, and it's coming very soon," answered McCloskey. 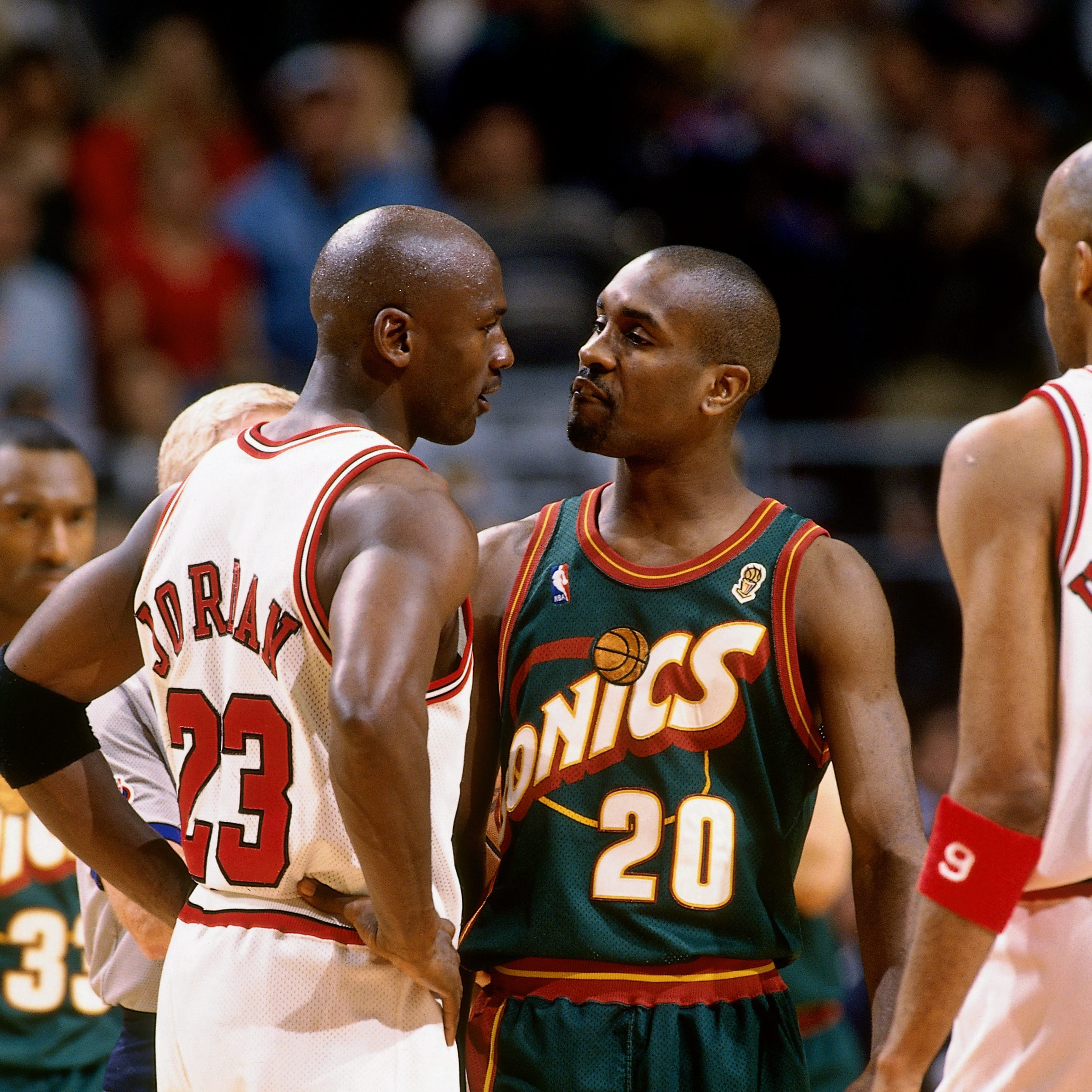 Michael Jordan #23 of the Chicago Bulls exchange trash talsk with Gary Payton #20 of the Seattle SuperSonics in Game 2 of the NBA Finals at the United Center in Chicago, Illinois, June 7, 1996. /VCG

The 1995-96 season witnessed the rise of (perhaps one of) the greatest team in NBA history, Jordan and his Bulls that achieved 72 wins in the regular season, a record that was only broken by the Golden State Warriors in 2016.

The team were getting close to their fourth championship in solid steps – no one seemed to be able to even slow them down. The Bulls only lost one game eliminating the Miami Heat, the New York Knicks, and the Orlando Magic. When Tim Hardaway, Patrick Ewing, Anthony Hardaway, and Shaquille O'Neal were watching TV, Jordan and his teammate already led the SuperSonics 3-0 in the Finals. 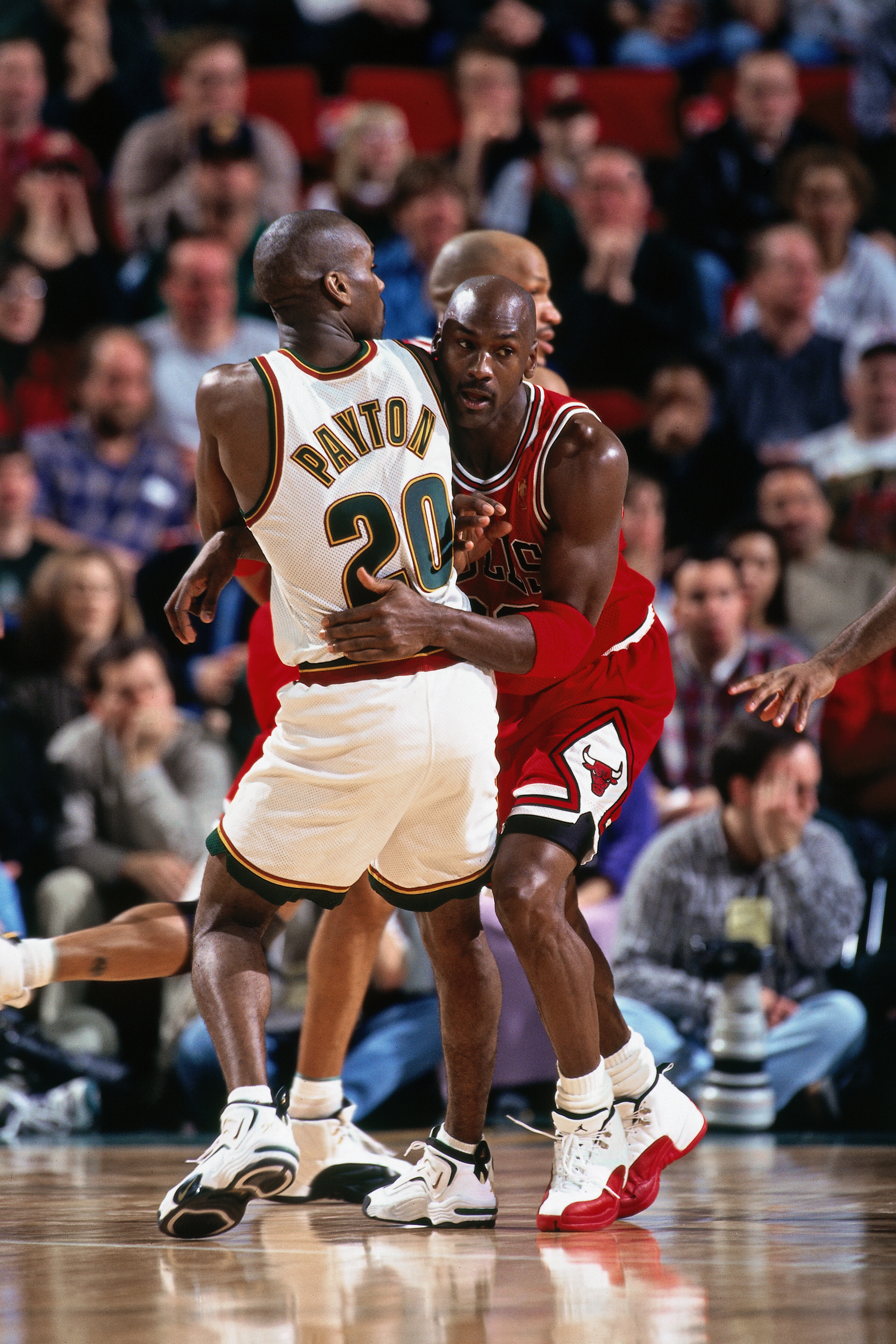 Gary Payton #20 of the Seattle SuperSonics tussles with Michael Jordan of the Chicago Bulls in the game at the Key Arena in Seattle, Washington, February 2, 1997. /VCG

Then there was Gary Payton, nicknamed "The Glove." He had the best defense for a point guard in NBA history as the only one in his position to become the Defensive Player of the Year (DPOY).

SuperSonics head coach George Karl did not Payton to invest all of himself in defending Jordan because the team needed him in the offense. Nonetheless, he did not seem to have any other choice.

Payton took the job and he did well, though he was not working alone. As a top posting-up point guard, he knew how to defend that weapon of Jordan. Meanwhile, Payton almost glued himself to Jordan – it would take a whole set of pushing, elbowing, and other tussling moves for Jordan to even touch the ball. Meanwhile, he had to exchange trash talks with Payton all the time. 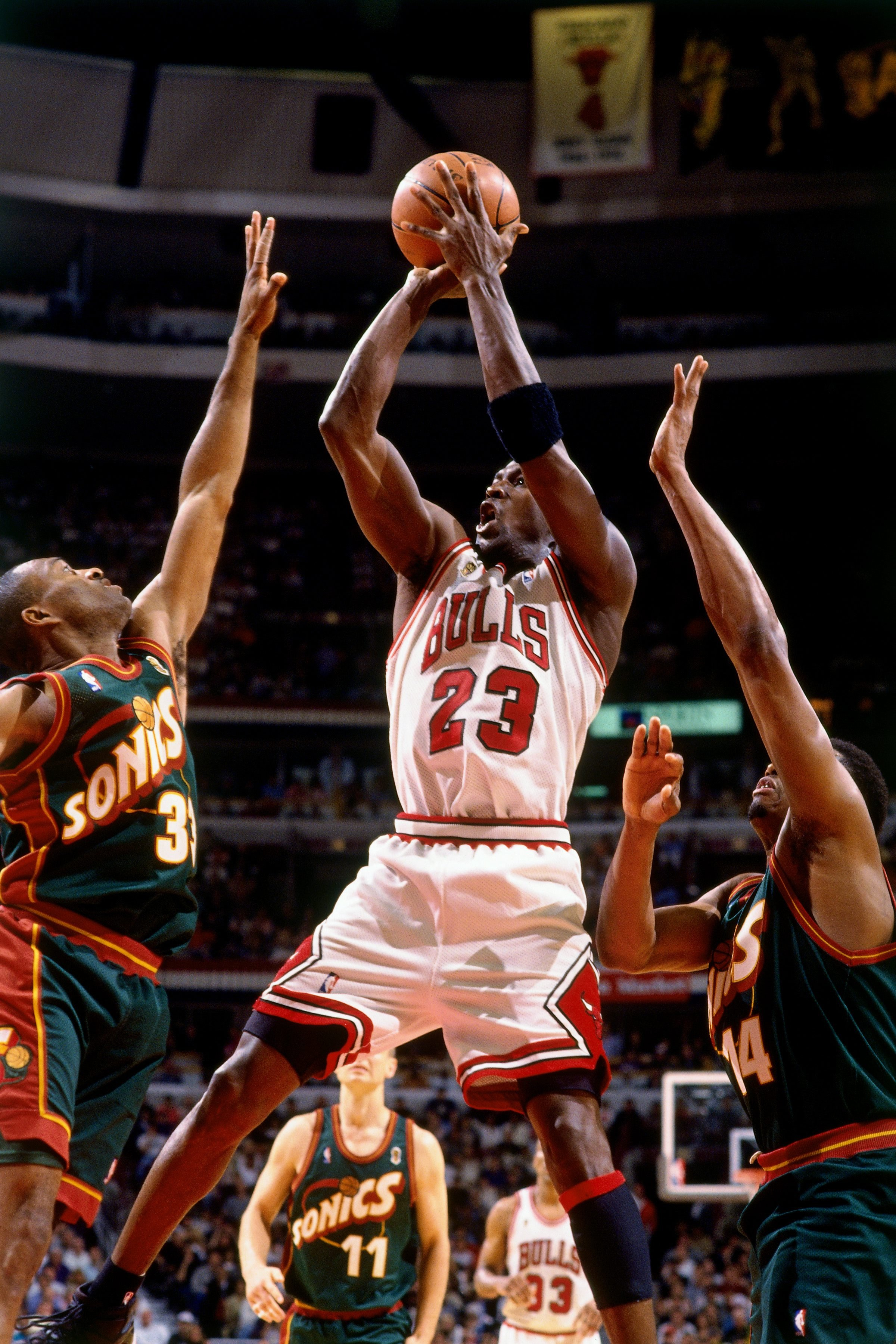 Michael Jordan #23 of the Chicago Bulls shoots the ball in Game 6 of the NBA Finals against the Seattle SuperSonics at the United Center, June 16, 1996. /VCG

Besides, Payton got help. The SuperSonics had a group of forwards who were around 2.08 meters tall and fast enough to play two positions. There double-teaming and switch defense were already historic. Hakeem Olajuwon, a top-two center in NBA history, met the SuperSonics seven times in the playoffs and lost six series to the team.

Even Jordan found the SuperSonics' forward crowd such a headache. The Bulls lost Game 4 and Game 5. In the last three games, Jordan only scored 23.7 points at an FG rate of 36 percent. Though the Bulls managed to win Game 6 to claim the title thanks to Dennis Rodman's magical rebounding, this series was the worst Finals in Jordan's career.