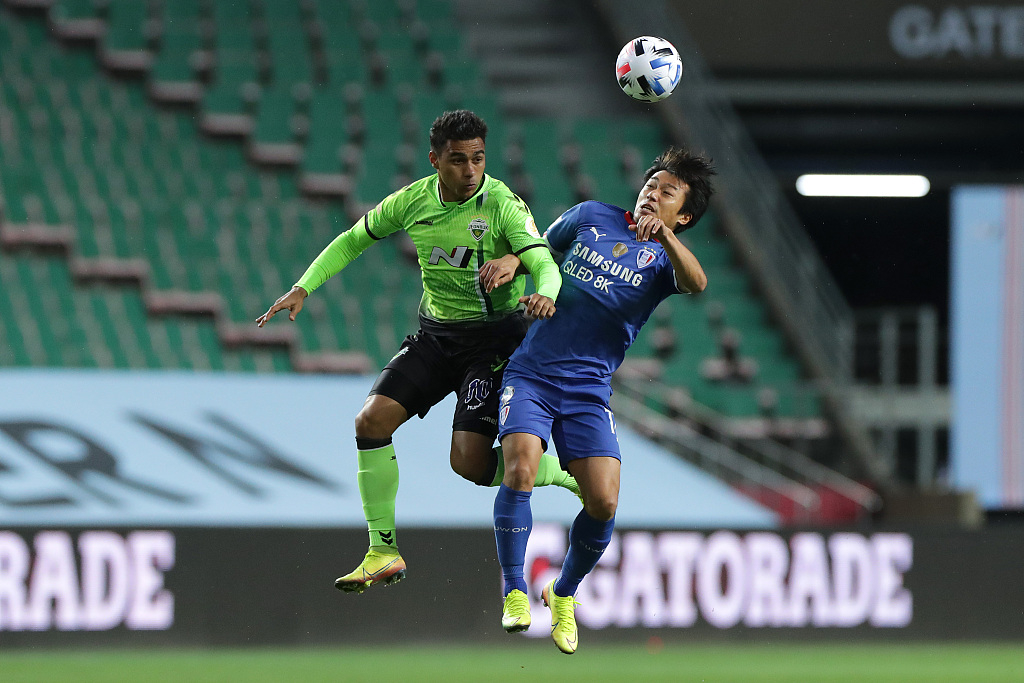 Players battle for the ball during the K League's opening game in which Jeonbuk Hyundai Motors beat Suwon Samsung Bluewings 1-0 in Jeonju, South Korea, May 8, 2020. /VCG 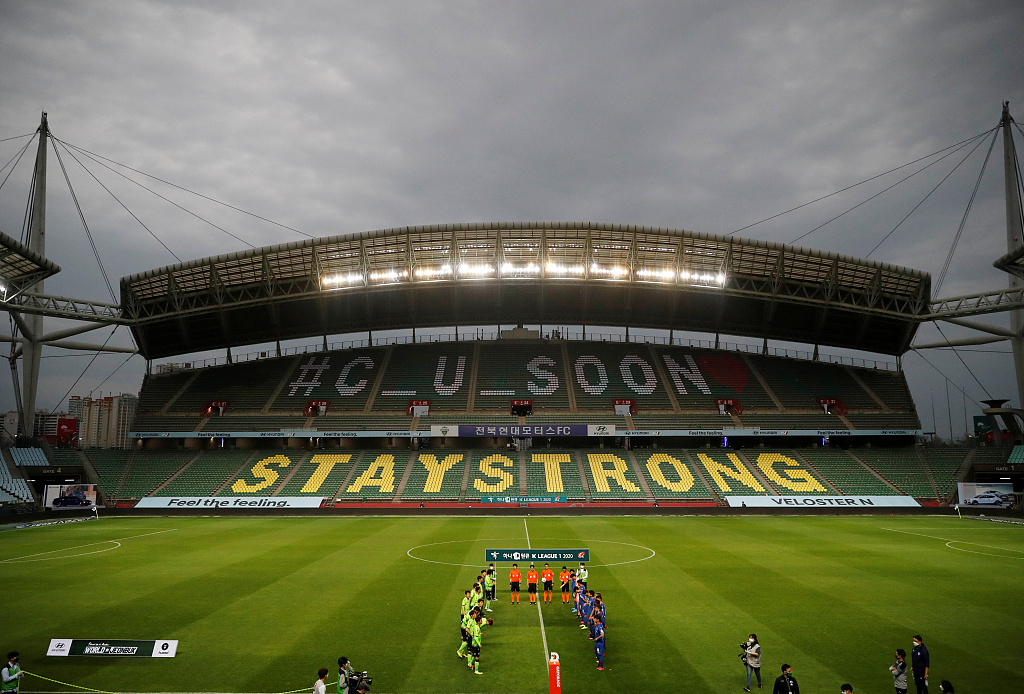 Broadcasters from 10 countries, mostly in Asia and Europe, have bought rights for the season and South Korea's football association K-League live-streamed Friday's match on Twitter and YouTube with English commentary.

Han Dong-min, a Bluewings fan who usually watches games in the stadium, was rooting for his team at a pub in Suwon, on the outskirts of Seoul.

"I was really happy to watch a football match even it was without fans," said the 22-year-old Han after his team's 1-0 defeat.

After a goalless first half, Jeonbuk striker Lee Dong-gook scored in the 83rd minute to clinch victory for the defending champions.

Lee celebrated the goal with sign language meaning respect, joining the "Thanks To You Challenge" in South Korea to express gratitude to medical workers fighting hard to tackle the virus. 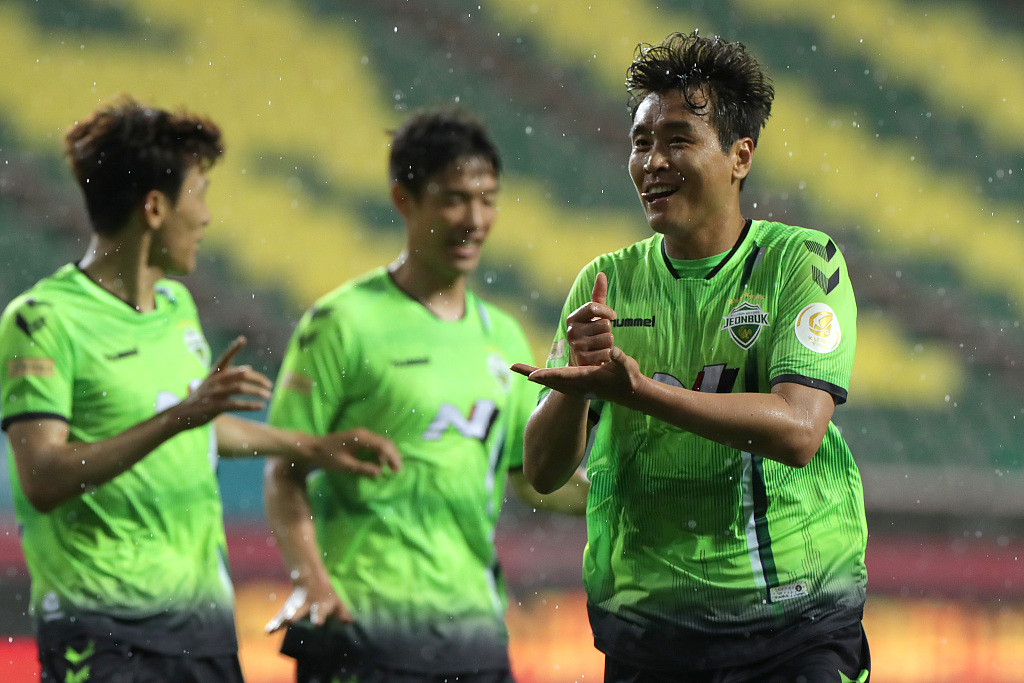 Lee Dong-gook (R) of Jeonbuk Hyundai Motors gives a thumbs up after scoring a goal to defeat Suwon Samsung Bluewings 1-0 during the K League's opening game in Jeonju, South Korea, May 8, 2020. /VCG

"I was disappointed as all football games around the world were suspended because of the coronavirus," said Lee Sang-hyup, a 24-year-old Bluewings fan in Suwon.

"But after watching today's game, I feel like my heart is beating after a long time."

South Korea, which has conducted widespread testing, intensive contact tracing and tracking apps to contain the spread of the virus, has eased social distancing rules since May 6. 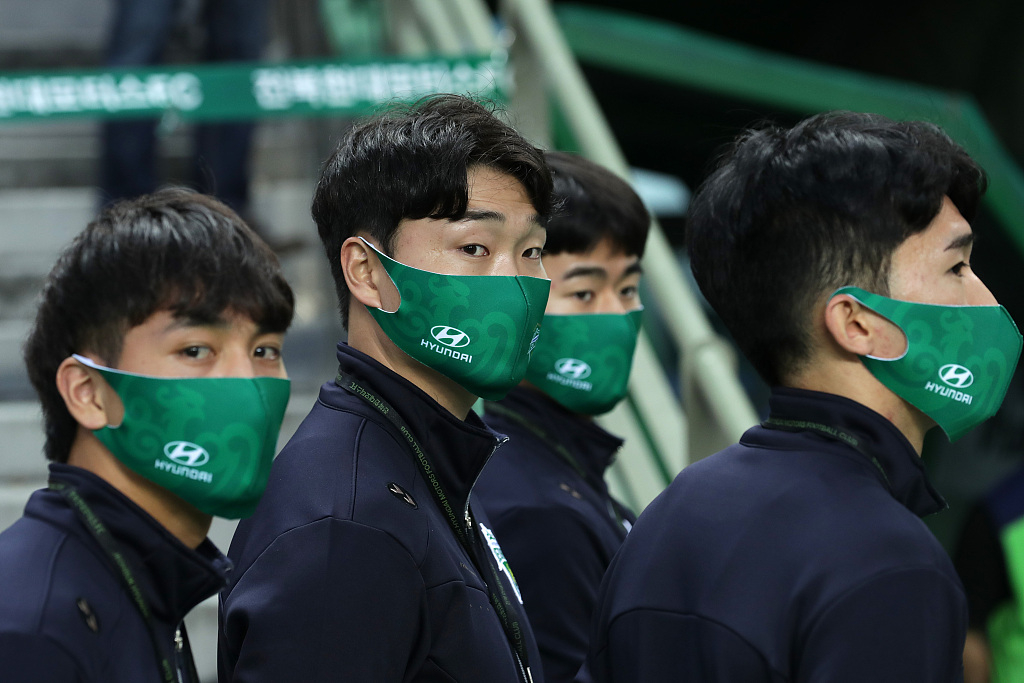 The K-League opener followed the start of South Korea's baseball league on May 5, which attracted fans of Major League Baseball (MLB) craving to watch games with MLB on hold due to the coronavirus pandemic.

The K League is Asia's oldest professional league, dating back to 1983, and teams will play 27 matches this season, down from 38 due to the delay caused by the coronavirus.