"However much money you want, I can give it to you," Yangon factory owner Mr. Gu pleaded as his business was vandalized on Monday. "Please don't attack my factory."

"And they don't want it (money). All they have is, 'I don't like you Chinese being here in Myanmar'," Gu told CMG after the attack took place.

Gu is among the owners of 32 Chinese-invested garment companies in Myanmar whose factories have been brutally smashed, burnt and robbed. According to the Chinese embassy in Myanmar, total property losses could reach 240 million yuan ($36.89 million). Two Chinese employees were injured during the attacks. 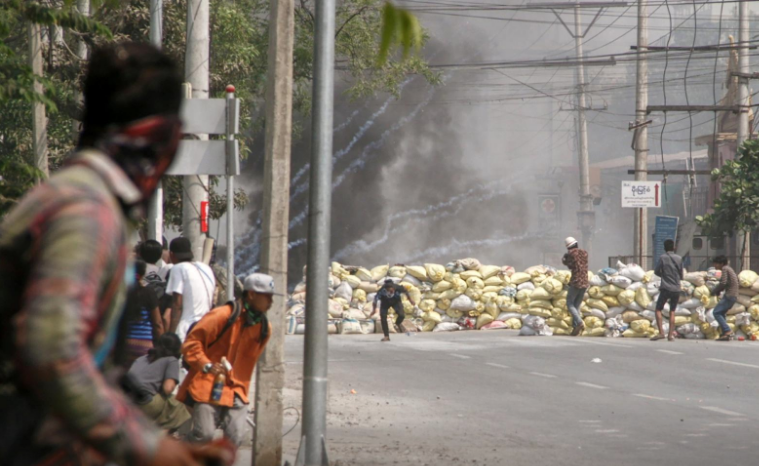 Demonstrators take cover behind a barricade during a protest in Mandalay, Myanmar, March 15, 2021. /Reuters

Myanmar's State Administration Council has imposed martial law in the vandalized areas, giving administrative and judicial powers to the commander of Yangon region to maintain the rule of law and tranquility. Four other townships were later added to the list.

Beijing called for "solid measures" from Yangon to stop all acts of violence and guarantee the safety of Chinese nationals and companies.

"We are very concerned about the safety of Chinese nationals," said Zhao Lijian, a spokesperson for the Chinese Foreign Ministry, before expressing hope that the people of Myanmar would voice their calls through legal means.

China urges all parties in Myanmar to keep calm, exercise restraint and solve disputes through dialogue and negotiation, he added.

Myanmar's military declared a one-year state of emergency on February 1, with state power handed over to the Commander-in-Chief of Defense Services Sen-Gen Min Aung Hlaing, who is also chair of a newly-formed State Administration Council.