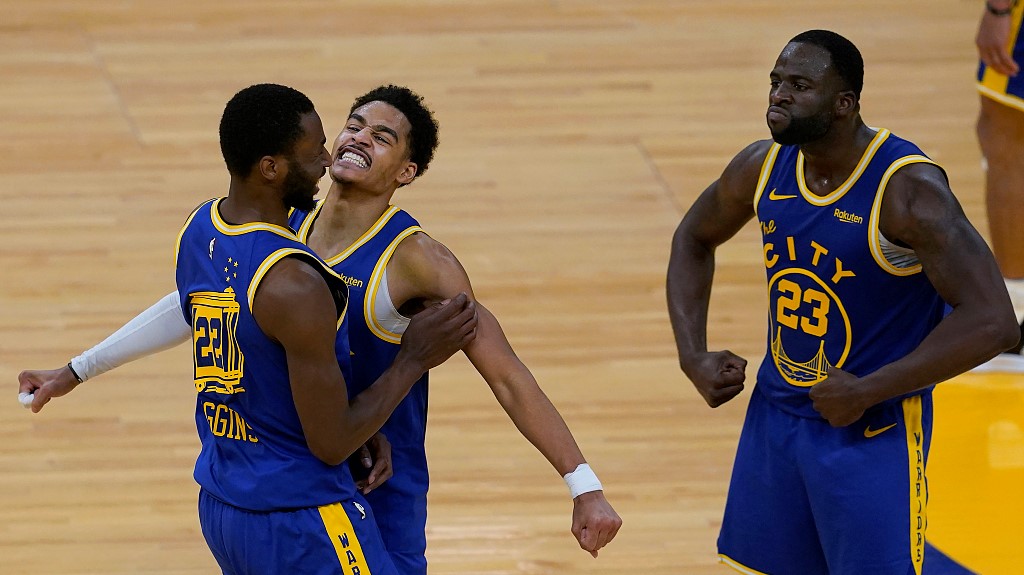 Andrew Wiggins (L), Jordan Poole (C) and Draymond Green of the Golden State Warriors celebrate in the game against the Phoenix Suns at Chase Center in San Francisco, California, U.S., May 11, 2021. /CFP

The Golden State Warriors defeated the Phoenix Suns 122-116 at Chase Center in San Francisco on Tuesday, holding on to their No. 8 ranking in the Western Conference over the Memphis Grizzlies.

The Suns are still trying to surpass the Utah Jazz to reach the top of the West and thus had no reason to pull their punches against the Warriors. They stopped at nothing trying to limit Warriors star Stephen Curry. As a result, Curry, who has averaged 31.9 points per game this season, went 7-22 on the field and 1-11 from downtown, getting only 21 points.

The Suns once led by 16 points and seemed as if they had sealed the victory before the fourth quarter, but Tuesday's Warriors were a bit different. 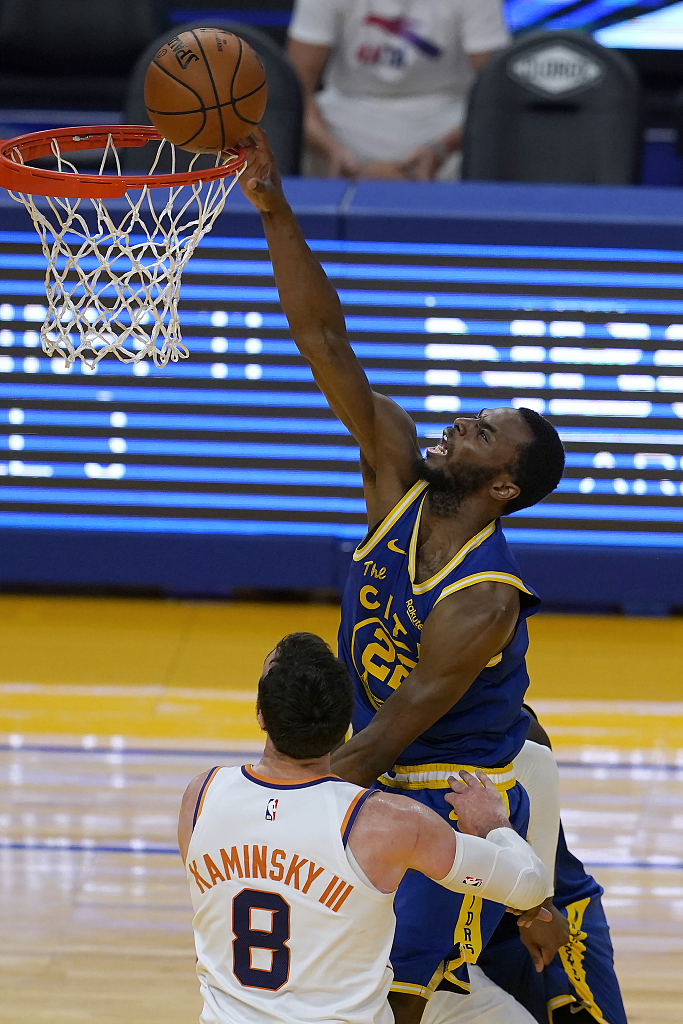 Andrew Wiggins (#22) of the Golden State Warriors dunks in the game against the Phoenix Suns at Chase Center in San Francisco, California, U.S., May 11, 2021. /CFP

Starting with Andrew Wiggins who dropped a game-high 38 points for the Warriors. Since he joined the NBA in 2014 as the first-overall selection, many have been accusing him of wasting his talents, mainly because he lacked aggressiveness in the game.

Wiggins was not like that in Tuesday's game as he scored 24 points and grabbed five offensive rebounds. Sixteen of his points came from second-chance offense. In the fourth quarter, Wiggins drove into the paint and dunked over 2.13-meter-tall Frank Kaminsky, finishing a 2-plus-1 play. Juan Toscano-Anderson (#95) of the Golden State Warriors dunks in the game against the Phoenix Suns at Chase Center, May 11, 2021. /CFP

Other Warriors made key contributions to the team's valuable victory as well. For example, 1.98-meter-tall Juan Toscano-Anderson was everywhere defensively, covering from 1.83-meter-tall Chris Paul to 2.11-meter-tall, 113-kilogram Deandre Ayton. Jordan Poole drained team-high three triples. In the last three minutes of the fourth quarter, Poole, Toscano-Anderson and Wiggins buried three straight shots from the arc, helping the Warriors take the lead in the end.

The Warriors finished the most difficult period of the last part of their schedule in the regular season with four consecutive wins. They will meet the New Orleans Pelicans and the Grizzlies in the last two games. As long as they don't make too many costly mistakes, the team can hold their fate in their own hands.

Other games on Tuesday (away teams come first): 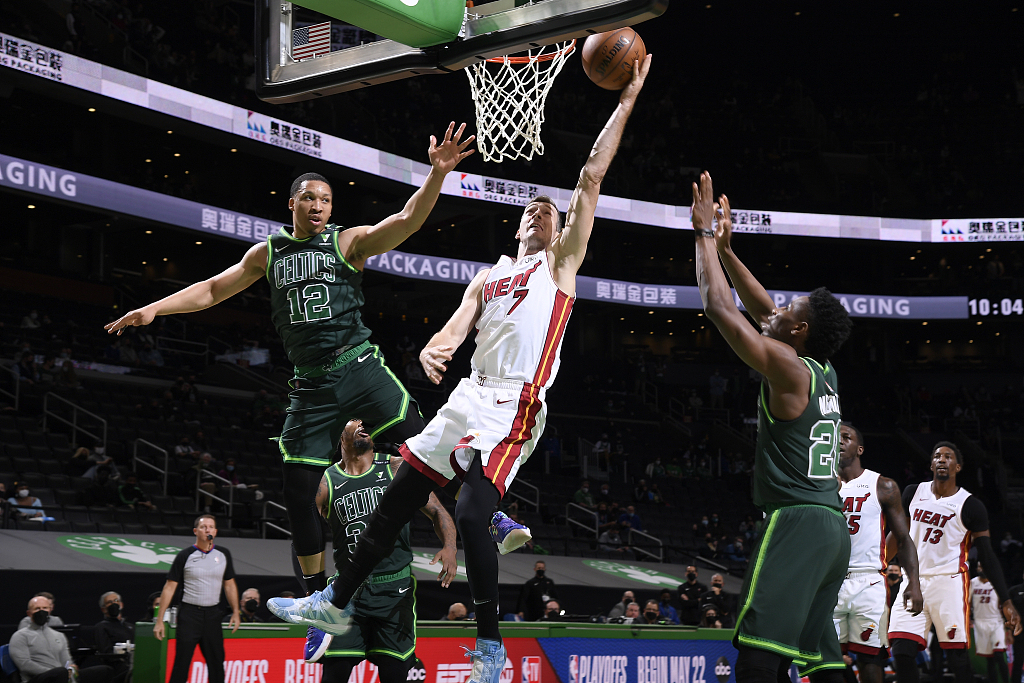 Goran Dragic (#7) of the Miami Heat shoots in the game against the Boston Celtics at TD Garden in Boston, Massachusetts, U.S., May 11, 2021. /CFP

This was the second time for the Celtics to host the Heat at home in three days and they lost again. Thanks to this win, the Heat made sure they don't have to attend the play-in tournament to compete for playoff qualification.

Though Jimmy Butler quit the game because of injury after playing 17 minutes, Duncan Robinson, Tyler Herro and Goran Dragic took over the Heat's offensive load by going 14-23 from the 3-point line together. Their performance will matter a lot in the postseason if the Heat want to pull any surprises like they did last season.

By contrast, the Celtics, which lost to the Heat in the Eastern Conference Finals last season, will basically have to start their postseason trip from the play-in tournament. Moreover, one of their star duo, Jaylen Brown, won't be able to be there for the team because he's undergoing surgery to repair a torn ligament. Before the injury, Brown was playing the best game of his career averaging 24.7 points, six rebounds, 3.4 assists and 2.8 triples at 39.7 percent.

Things just cannot get any worse for the Celtics. 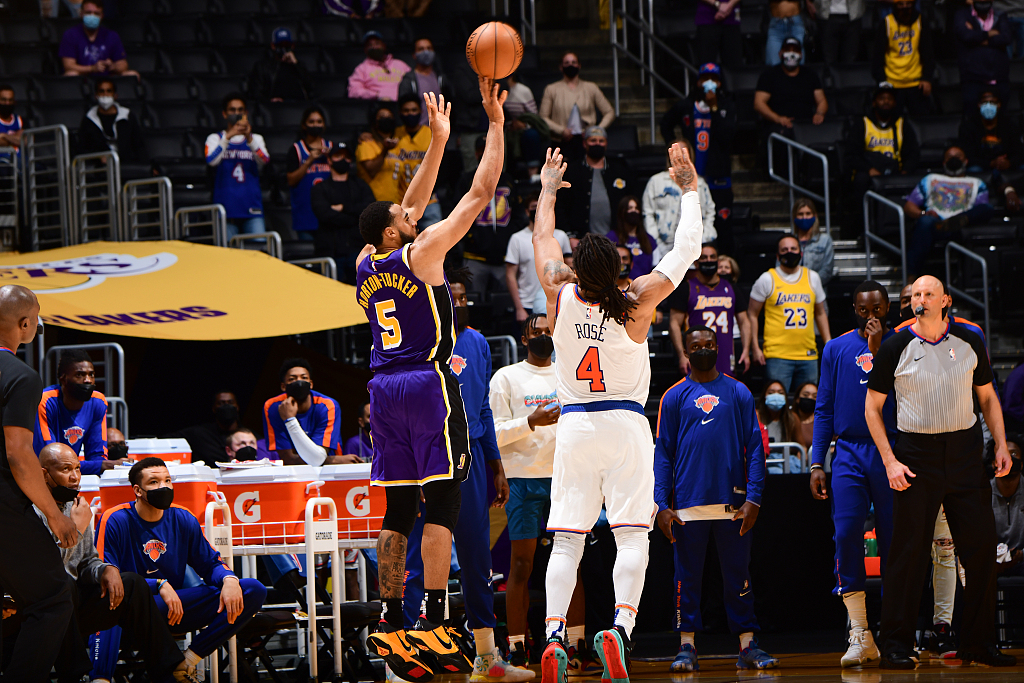 Talen Horton-Tucker (#5) of the Los Angeles Lakers shoots in the game against the New York Knicks at Staples Center in Los Angeles, California, U.S., May 11, 2021. /CFP

It's hard to imagine in today's NBA two teams that together score only 200 points in an overtime game, but that's what happened between the Lakers and the Knicks at the Staples Center in Los Angeles on Tuesday night.

You could tell that the Lakers' head coach Frank Vogel had to really scratch his brain to limit the young, dynamic Knicks. Although Julius Randle put down 31 points, eight rebounds and five assists, he found it extremely difficult to work with his favorable left hand on offense. At the end of the last quarter and in overtime, every time when Randle found mismatch in the low post, the Lakers always had a big man double-teaming him, testing his court vision and passing ability. 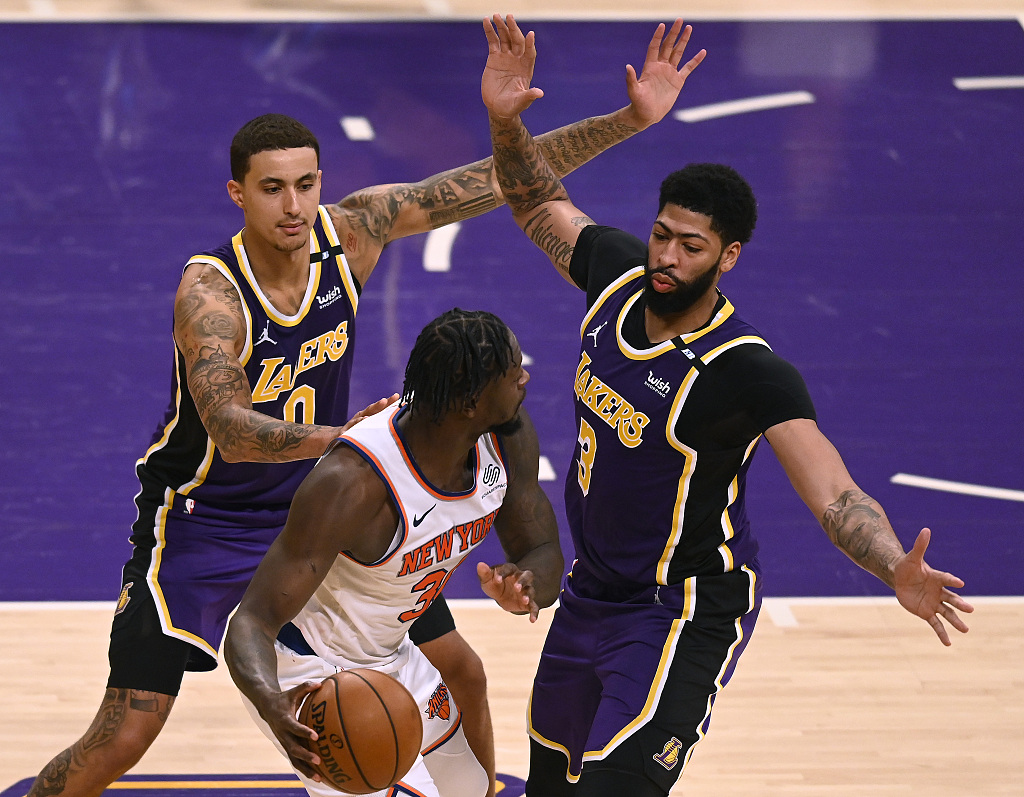 Kyle Kuzma (#0) and Anthony Davis (#3) of the Los Angeles Lakers double team Julius Randle of the New York Knicks in the game at Staples Center, May 11, 2021. /CFP

As for Knicks' R.J. Barrett and Reggie Bullock, the Lakers defenders were always fast enough to appear in front of them, stopping them from shooting immediately after catching the ball. Once either of the two had to handle the ball, the Knicks' offense was basically paralyzed.

There was not much the Lakers could do to stop Derrick Rose, especially after Alex Caruso returned to the locker room because of injury. But Rose could not beat the purple and gold by himself or with his 27 points, six rebounds and six assists. 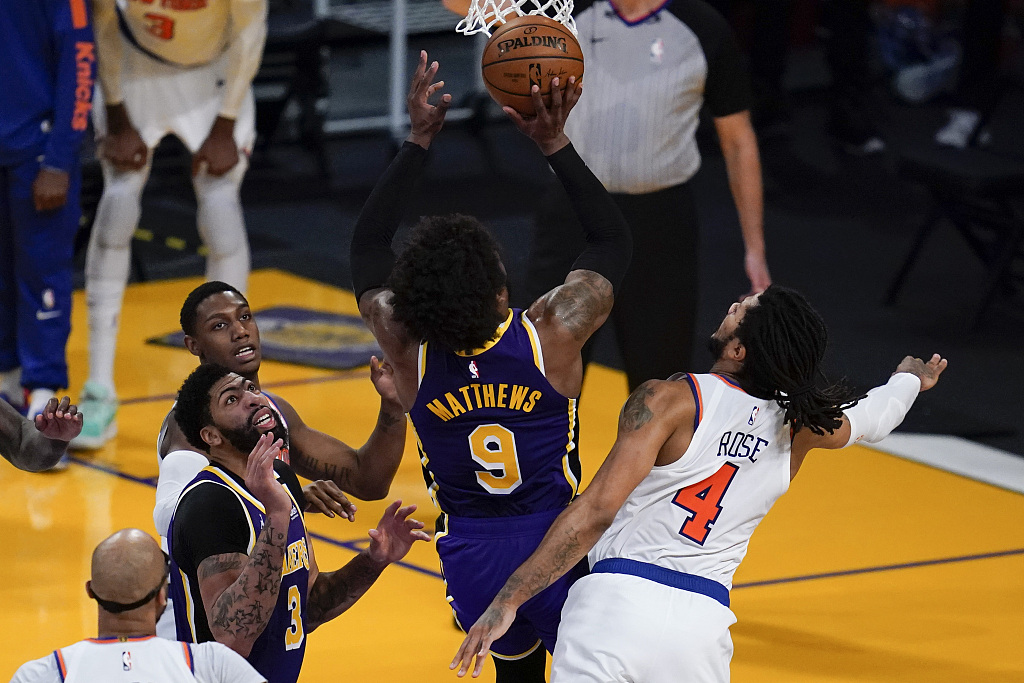 Wesley Matthews (#9) of the Los Angeles Lakers shoots in the game against the New York Knicks at Staples Center, May 11, 2021. /CFP

Tough defense contributed over half to the Lakers' home win on Tuesday, however they were never able to make the ball flow in the game. Anthony Davis had to work much harder before he even received the ball. Andre Drummond, despite all the offensive trouble he caused because he lacked shooting range, grabbed five valuable offensive rebounds. Wesley Matthews who lost most of his athleticism to his torn left achilles tendon, also had three rebounds on the offensive glass and turned one of them into a put-back basketball for two valuable points.

Of course, there was also the game-winning pull-up 3-pointer by Talen Horton-Tucker in the Lakers' last possession. LeBron James is reportedly set to return to the court against the Houston Rockets on Wednesday. His team claimed two important wins without him.