It was only four days ago that Alexander "The Great" Volkanovski confirmed his status as the best featherweight in the UFC by beating Max "Blessed" Holloway for the second consecutive time. He said in many interviews that he had no intention of moving up or down in weight classes as he wanted to be an active champion, and it looks like he will have to live up to those words as UFC Fight Night 172 on July 16 is headlined by an important contenders bout.

In the main event, Calvin Kattar (21-4, 5-2 in UFC) faces Dan Ige (14-2, 6-1 in UFC). Ranked #6 and #10 respectively, both men would normally be considered at least a year away from a title shot. However, as seen at UFC 251, not only has the coronavirus been added to the list of reasons fighters may pull out and need a replacement, but also, it's the squeaky wheels that get the grease – Jorge "Gamebred" Masvidal doesn't get his championship bout against "The Nigerian Nightmare" Kamaru Usman unless Dana White and the rest of the decision makers know who he is. 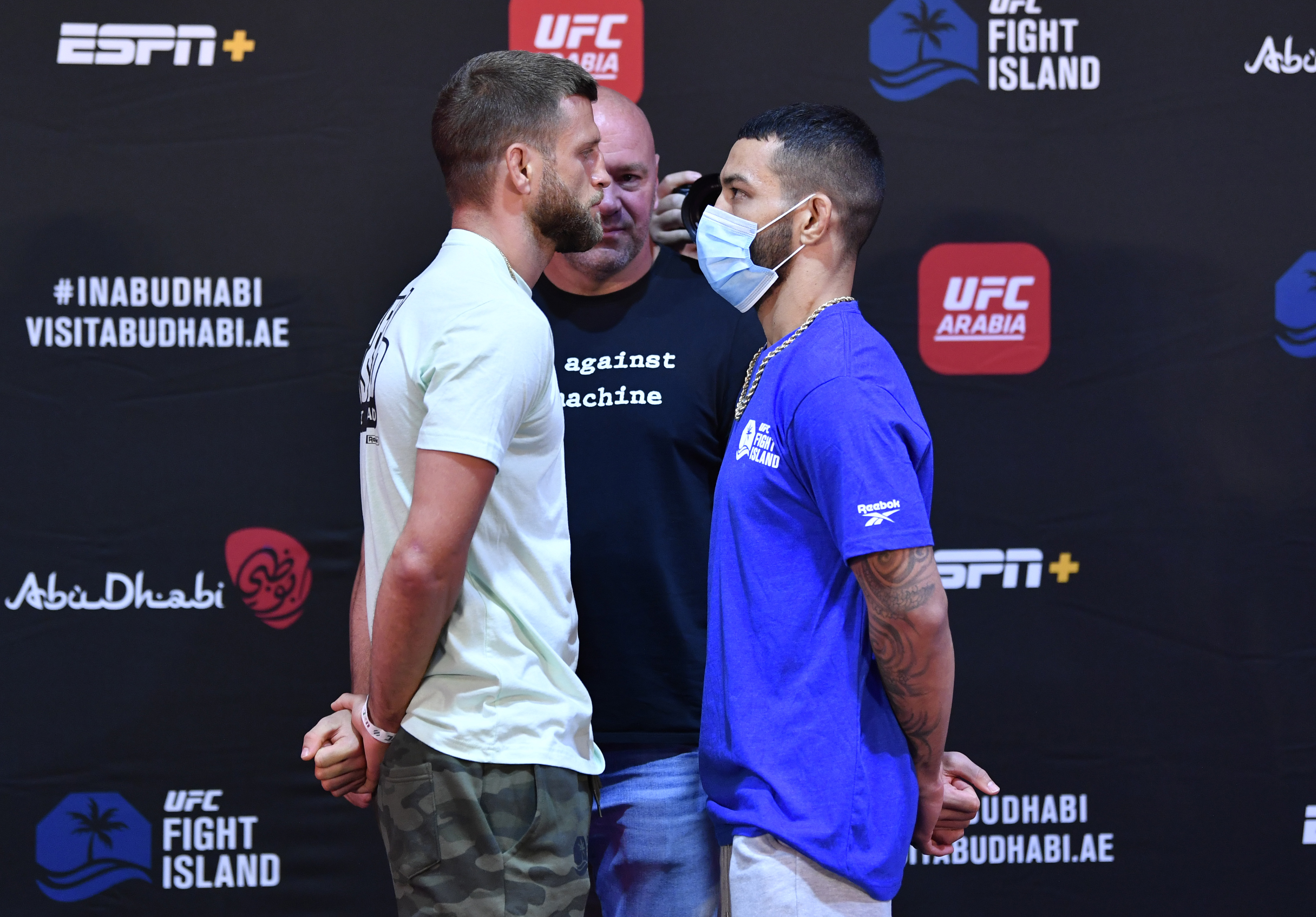 Calvin Kattar (L) and Dan Ige (R) square up at the weigh-ins on July 15, 2020 before their featherweight bout at UFC Fight Night 172 on Yas Island, Abu Dhabi, UAE. /Getty

And just as Masvidal became unforgettable for annihilating "Funky" Ben Askren, Kattar became an MMA sensation for his knock out of "Lil Heathen" Jeremy Stephens earlier this year at UFC 249 in the empty VyStar Veterans Memorial Arena in Jacksonville, Florida on May 9. Stephens, then ranked #7, was the favorite against the lower ranked Kattar (then #9) and started off strongly, pushing the pace and establishing Octagon control fairly quickly. What makes Kattar such a standout is that, during all this, he remained patient; he kept his range and tagged Stephens with combinations only when the opportunity arose.

This is why he has so many KO/TKO finishes but lost to a cardio-machine like Zabit Magomedsharipov who is all about motion and constant pressure. Against a fighter like Stephens though, his style puts them under pressure. Any mistake will lead to a punch in the mouth. Towards the end of the first round, Stephens leaned in as if to launch an uppercut, but a moment's hesitation lead to him getting a front kick that opened up room for a right straight that echoed off his jaw. It flipped the dynamic of the bout and Kattar spent the last 30 seconds headhunting.

Whatever Kattar's plan was, it was working. In Round 2, Stephens was far more apprehensive, if still the aggressor, and the two men remained mostly in the center of the Octagon rather then pushing the fence. Around 90 seconds in, Kattar found his range and began teeing off on Stephens until there was 2:19 remaining in the round when he swapped long straight punches for a short sharp elbow that knocked Stephens, if not completely out, into another dimension and locked in his position on UFC highlight reels for years to come.

Calvin Kattar (L) hits Jeremy Stephens in the jaw with a short elbow during their featherweight fight at UFC 249 in the VyStar Veterans Memorial Arena in Jacksonville, Florida, May 9, 2020. /YouTube

If featherweight's top guys (Volkanovski, Holloway, Zabit) are known for their high volume, high variance output, it can be argued that Calvin Kattar has the hardest hands and, perhaps, the most accurate too. Everything he threw that did damage landed with precision.

His next opponent, Dan Ige, hits hard too, but his game is filthy dirty boxing. There's something of a Dan Henderson about him in the sense that he's a great grappler and, in his early fights, used his fists to establish a grappling game. As his UFC tenure has moved on, so has he, and Ige now tends to use his ground game as defense only and as a method to keep the fight standing.

In his fight against veteran Edson "Junior" Barboza, he weathered the Brazilian's early flurry and hit enough big punches – and a spectacular flying knee – in the first round to establish himself. In rounds 2 and 3, he got in close and used a mix of quick jabs and looping roundhouses to do damage and eliminate the room for Barboza needed trademark kicks while also taking plenty of offense on the chin without so much as blinking. 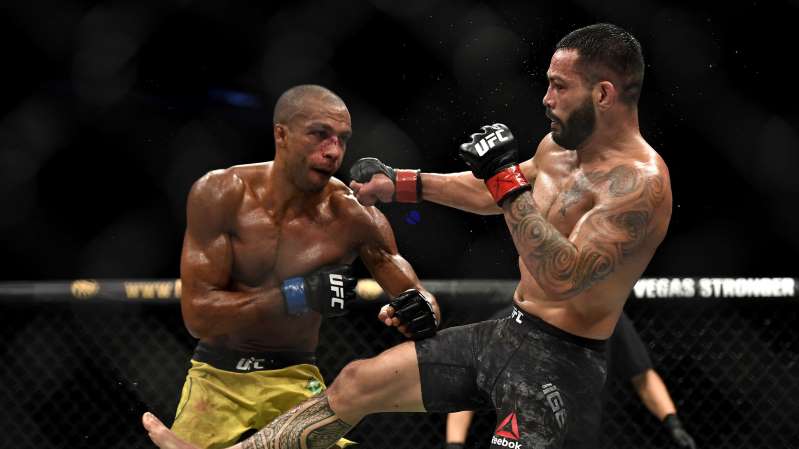 Edson Barboza (L) faces Dan Ige (R) in a featherweight bout at UFC on ESPN: Overeem vs. Harris at the VyStar Veterans Memorial Arena on May 16, 2020. /Getty

The only sign of his grappling came deep into the final round once Barboza was already thoroughly damaged and this was enough to win him the fight. The result – a split decision pretty much only won in the final minute – reads like a backhanded compliment, especially when compared to the ruthless way his future opponent, Calvin Kattar, ended his last fight but to reach that point anyway, it shows he has true grit.

When Kattar faces Ige this Wednesday, this may be the deciding factor. Not whose striking is cleaner, nor whose hands are heavier, but who can get hit the most and live to tell the tale. Plenty of fights are set up to be stylistic proving grounds, some are set up to put ranked fighters on notice, few are set up to be as much of a bloodbath as this.